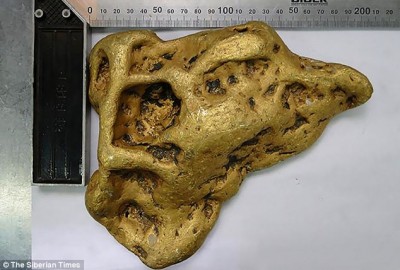 Mining is one of Russia’s major industries, accounting for a significant percentage of the country’s overall economy. Gold is one of the primary resources here, with an estimated 220 tons mined in 2013, ranking 4th overall in global ranking, just behind the United States.

The majority of the gold that is found in Russia comes from the eastern regions of the country as well as Siberia. Amur, Irkutsk, Khabarovsk, Krasnoyarsk, Magadan, and Sakha-Yakutia are responsible for roughly 2/3 of the country’s output.

Unlike many other countries, placer gold deposits still account for a sizable percentage of the total production here. Due to more strict regulations and mining restrictions, placer mining on a large scale can be very difficult today. Thus in countries like the U.S. and Australia, only a small amount of total production comes from placer deposits in rivers and streams.

Placer deposits are also more quickly depleted than lode sources of gold, meaning that the exceptionally rich placers that were discovered and mined during the 1800’s throughout the world were often unprofitable in only a few short years.

This problem is no exception for Russia, and there high production coming from placers is a continuing problem for their gold mining industry. The richest of these deposits continue to be depleted.

Large mining operations are most prevalent in the eastern regions of the country.

Foreign mining companies have a major influence on the total production within Russia. The major players include Kinross Gold, Highland Mining, High River Gold Mines, and many of the other global mining companies that operate the largest mines around the world.

Russia isn’t particularly well-known for producing large gold nuggets, but this is likely more a result of the gold being refined and not making it to the collectors market. There are certainly regions that are known to have produced sizable gold nuggets.

One recent discovery garnered quite a bit of attention. Dubbed the “Devil’s Ear Nugget”, an exceptional 6.66 kilogram gold nugget found at the Ukhagan Mine in Siberia. The spectacular nugget was actually cast aside by the mining equipment that was being used (a very common practice that occurs due to larger rocks being screened out), but was spotted by one of the miners sitting in the tailing pile.

There are certainly other large gold nuggets that are found in Russia on a regular basis that are never heard about. While it certainly doesn’t compare to some of the largest nuggets found in history, it is still an exceptional find, especially considering that miners have been searching for gold in Russia for literally thousands of years.