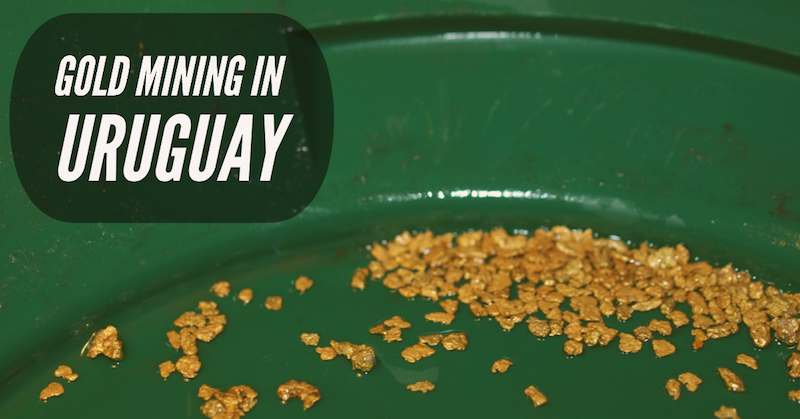 Uruguay has probably garnered the least interest of any of the South American countries for gold production. Mineral output in general is not high in Uruguay, and only comprises of about 1% of South America’s GDP.

During the 16th and 17th centuries, Portuguese explorers began searching for valuable minerals in Uruguay, but were met with much resistance from locals there, and along with very limited success discoveries of precious metals during the early days, little attention was given to this region. In comparison to many of the other rich gold-bearing regions found throughout South America, such as those in Chile and Venezuela, the early explorers were not particularly attracted to the country.

From the 16th century on to present day, these small gold occurrences were really the only gold known prospects within Uruguay. Unlike many of the gold rich countries in South America that experienced gold rushes, there was really no gold rush to Uruguay of any significance due to the limited gold occurrences.

Despite a historical lack of any real gold mining over the centuries, that is not to say that Uruguay does not have good potential for gold. On the contrary, it is one of the least explored regions in the world, and you never know what could be found.

A good example of this is the San Gregorio Mine operated by Orosur. The mine is located 70 kilometers south of the Brazilian border, and is currently the only commercial gold mine operating within Uruguay.

The mine is located in an area that has been known to have gold for many years, but historic mining had limited technology to take advantage of the full resource. The Spanish first mined in this area in the 1770s, and the British operated some gold mines around the town of Minas de Corrales during the early 1900s. But cost of production and only marginal output from the mines at that time limited continued interest in this area for many years.

Orosur began operating the San Gregorio mine in earnest only very recently, when they acquired the rights to the area in 1996. Several open pits were constructed in the area to extract the gold resources from the earth. In 2011, they began work on an underground gold mine at the Arenal Deeps Mine, which is currently producing lode gold.

It is estimated that there are reserves of over 500,000 troy ounces of gold that can be produced from the San Gregorio Mine and surrounding area controlled by Orosur. An impressive amount of gold, considering the area was generally overlooked for centuries.

There is little doubt that there are still many mineral resources that are yet to be discovered in Uruguay, and it is highly likely that gold and silver are out there. Extremely remote and hazardous conditions will undoubtedly limit exploration for many years to come. An adventurous prospector may find that Uruguay is a spectacular area to explore, if for nothing more than the sheer wildness of it.

Next: Prospecting and Mining for Gold in Argentina