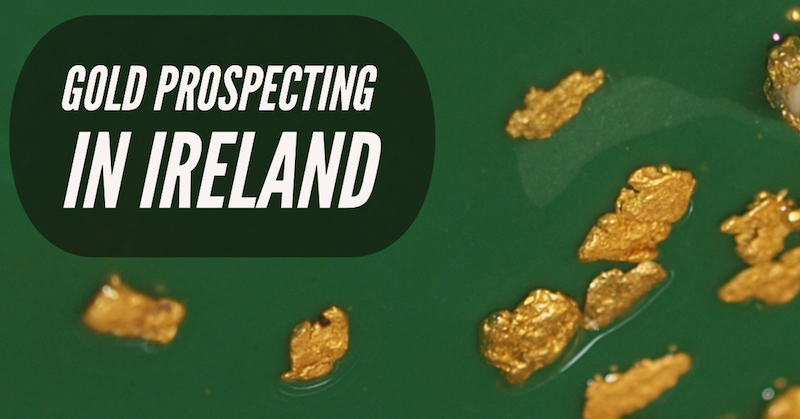 Many are surprised to learn that gold can be found in Ireland. While the gold mined in Ireland may not be in the quantities that are found in many other countries, there is nonetheless some nice gold to be found in many creeks and rivers throughout the country by persistent prospectors.

Due to the increasing interest from recreational prospectors in recent years, Ireland’s Exploration and Mining Division have put out a guide of Frequently Asked Questions about recreational panning in the country that is worth a look before you venture out.

The article covers some basic laws regarding prospecting and selling of gold.

In Ireland, there are limitations to the types of mining equipment that can legally be used. Generally speaking, any type of equipment that is motorized is prohibited within the countries waters. This includes common tools such as motorized highbankers and suction dredges.

Basic gold pans can certainly be used, and small sluice boxes are also allowed in most instances, with authorization from the NPWS and the Inland Fisheries Ireland. Be sure to check with the local regulatory agencies in the area you intend to prospect to get the current regulations.

Of course proper permission should always be obtained from all relevant landowners in a particular area.

The laws of Ireland dictate that all mineral resources are property of the State, and thus any gold that is found is technically the property of Ireland. While this is technically the law of the land, it is recognized that the appeal of panning for gold is to be able to keep some of it, so keeping of small quantities of gold found by recreational prospectors are allowed.

Selling of and raw gold discoveries is another matter. A State Mining Lease is required if the intent is to seek out mineral for purposes of sales and profit. These are issued by the Minister of Communications, Energy, and Natural Resources. If you intend to prospect on a larger scale, it is important to call them and get the proper permits in place. 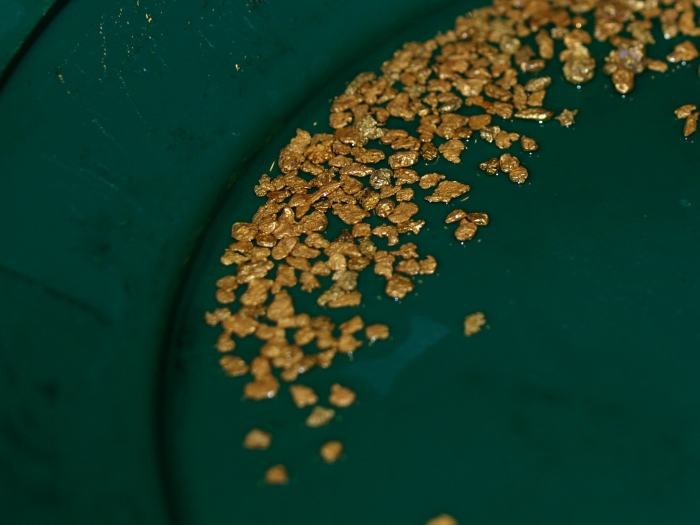 Where to Pan for Gold in Ireland

There are actually a handful of large mining companies operating in Ireland today, extracting lode gold from the rocks.

In Southern Ireland, the Wicklow and Wexford area is a known gold bearing area. Here, it common to find an abundance of quartz, which often contains small amounts of gold in it. The small gold stringers that run through chunks of quartz eventually erode away, and concentrate within placer deposits in local rivers and streams. This is generally the best place to look for the gold, since these concentrations can be captured with a gold pan.

The River Dargle is known to carry gold as well as many of its tributaries. Concentrations can be found behind large boulders and in bedrock cracks. Carefully working with simple hand tools to extract the heaviest material from the cracks can be a great way to find some placer gold.

The Wicklow area has been known to have gold for many years. In fact, for a short time there was a considerable amount of mining activity around the Gold Mines River, where it was reported that several thousand troy ounces of gold were discovered, including some nice nuggets weighing in at several ounces each.

This was an interesting little gold rush, in that deposits were depleted rather quickly. This is still probably the best area to find gold in Ireland, simply due to the amount that was discovered here. Although the area did become unprofitable to work long ago, undoubtedly there can still be a fair amount of gold found here by a diligent prospector.

Miners should certainly not limit themselves to the documented areas. Much of Ireland has favorable geology for gold, and small placer deposits of gold can almost certainly be found in countless creeks and rivers where the discovery has never been documented before.

Many are surprised to learn that there are actually some rather large commercial gold mining operations in Ireland too. There is a very large open-pit mining operation near Omagh, County Tyrone, in Northern Ireland. This mine is operated by Galantas Gold Corporation. Active exploration is currently taking place throughout the area.

In very recent years, there have been additional gold ore deposits that have been found in Northern Ireland that have yet to be mined or exploited. There extraction is likely to be very expensive, due to the extraction process of accessing the deeps ores, but they have certainly attracted much interest. However, these deposits are probably outside of the scope for the average weekend gold prospector who uses a simple gold pan or sluice box.

Next: 6 Tips for Finding Gold Nuggets on Exposed Bedrock