The Gold Rush to Colorado 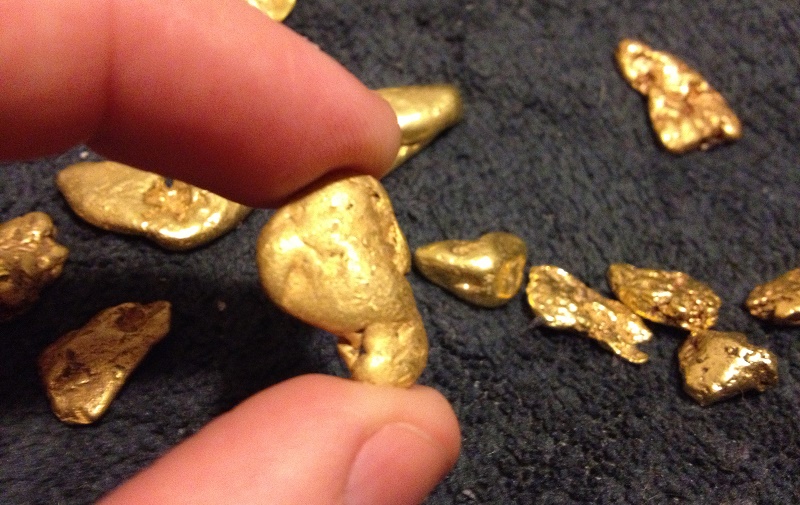 As with nearly all of the gold rushes throughout the western United States, it was placer deposits that were the first indicators of gold in Colorado. The now famous Pike’s Peak Gold Rush has an interesting history, because gold was actually discovered in this part of Colorado almost a decade before the gold rush started.

The first documented gold discoveries were actually way back in 1849, by prospectors heading to the recently discovered gold country of northern California. Although small amounts of gold were panned from the South Platte River, almost no serious attention was given to the area. With the excitement of the seemingly limitless gold mining opportunities in California, prospectors quickly moved westward to seek their fortune.

The gold deposits in Colorado sat dormant and unworked for nearly a decade.

It wasn’t until 1858, when prospectors mining in the area began to learn about the richness of the area. By the start of 1859, there were believe to be over 1,000 men in the area, exploring the surrounding creeks and rivers.

And they began finding gold. A lot of gold.

During these earliest days of the gold rush, it was the placers that were worked almost extensively, and miners used simple ground sluicing methods to recover placer gold from the bedrock.

It was soon discovered that much of the area around present day Denver in central Colorado was exceptionally rich.
In Boulder County, the Gold Hill/Sugarloaf mining district is noteworthy. Most of the production from this area was from later lode mining activity.

The Ground Hog Mine near Red Cliff in Eagle County is known for producing some rare crystalline gold specimens. In addition to gold, there county is exceptionally rich in silver.

Gold can be found in Gilpin County within the Central City district and Northern Gilpin District.

Some of the earliest gold discoveries were made in Park County, Colorado. Mining has taken place here ever since, and millions of dollars in precious metals have been extracted. The Alma district, Fairplay district, and Tarryall district were all quite rich, and the creeks within these areas contain gold that can often be found by gold panning and sluicing.

Summit County is a fantastic area for gold prospectors to search for gold, especially because the majority of the gold in this county has been recorded as being placers. The Breckenridge and Tenmile mining districts are of special note.

Teller County was overlooked for many years during the early gold rush to Colorado. It was not the gold dust or nuggets that eventually attracted miners to this area, but rather the rich telluride ores that were discovered here. Cripple Creek is the richest area here, and the region is actually responsible for some of Colorado’s richest mineral wealth.

Although there have been millions of ounces of gold mined in Colorado, the vast majority of the gold found here is either in hard rock ore deposits, or are found in the form of very fine flour gold, dust, and fine flakes of gold.

Gold nuggets are occasionally found, but the VAST majority of gold is quite small in size. Keep this in mind when prospecting. If you are using a metal detector, make sure you are using an extra sensitive gold detector like the Garrett AT Gold

or other VLF detector that can detect small gold.

Placer mining methods should also be used that are set up properly to retain fine gold. Many prospectors take advantage of newer equipment like the Gold Cube

to help capture these fine gold deposits. Careful panning technique will also help you to retain the most gold possible from the gold bearing creeks and rivers in Colorado.

Gold was found in the Taylor River in Gunnison County dating back as early as 1861. Search within the Tincup District. This is mainly a lode mining area but some gold can be panned from the river here.

You can find gold in the Animas River near Durango. Rumors of Spanish explorers mining in this are date back to the 1700s, but it was the later discoveries made in the La Plata Mountains that really attracted interest to the area.

Some gold can be panned in the Plata River. There was a lot of mining in this area, but much of the gold was locked up in telluride ores that require special techniques to release the gold from host rock.

Gold was discovered at the headwaters of Umcomphagre River. The town of Ouray was the richest area. Ores containing gold, silver, and lead were mined here. Some very high-grade free-milling gold has mined in Ouray and placers can be found in the river.

The South Platte River drains some of Colorado’s famous mining districts. The mines at Fairplay, Tarryall, and Alma all source gold that you will find in the river. Some of the richest placers were found near the headwaters at the North Star Mountain.

Considerable gold was mined from the Blue River near Breckenridge. The surrounding mines were the source for the rich placers that were mined here. It is estimated that nearly 1 million ounces of gold were mined from this area.

And: Gems in Colorado – Where to Find Topaz and Rhodochrosite