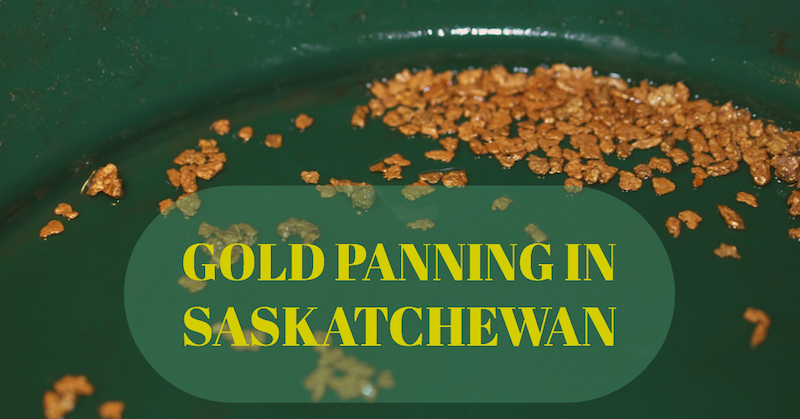 Most of the gold deposits in this province are found in the northern part. The Saskatchewan River has been found to have some gold deposits that recreational miners can be interested in especially if they can locate a good concentration. Panning is a popular means of searching for gold deposits in these rivers, as and you can find many locals engaging in the activity during their spare time.

Saskatchewan gold deposits are much like Alberta gold deposits, most are found in the rivers running through the province. Although it is likely that major gold deposits may be located somewhere in the province; these are yet to be discovered on any significant scale.

The small gold deposits around the province are usually in the form of flour gold. This type of gold is characterized by a very fine texture. Rather than as large flakes or even gold nuggets that are found in many of the major gold mining areas throughout Canada and the United States, flour gold is prevalent in Saskatchewan rivers.

Flour gold is found from Edmonton all the way to Prince Albert in Saskatchewan. If you are interested in small scale gold mining as a recreational miner, you will be happy to know that you can find this gold scattered throughout the Saskatchewan River. This forms a great starting point as you will get to learn more about gold mining and the various deposits around creeks and rivers.

When panning for gold in the Saskatchewan River, make sure that you abide by the regulations. It is best to contact the appropriate land management agency depending on the area that you decide to prospect in. It is also recommended that you take the time to familiarize yourself with the areas along the river where deposits have been found in the past. Getting in touch with local prospecting clubs might help you to pinpoint areas that area especially productive.

The Discovery of Gold in Saskatchewan

Gold in the province of Saskatchewan was discovered back in 1859. Trappers were first to talk of gold in the region before placer gold was actually reported to be available. There were even rumors suggesting that multi-ounce gold nuggets could easily be found lying around, however only flour gold is available for panning presently in the Saskatchewan River as noted above. It is unlikely that large gold nuggets were found here, even back then.

In 1910, some gold deposits were found in quartz outcrops along Pine Channel. It is this location in Lake Athabasca that marked the first substantial gold find. Another location where such free gold was also reported to have been discovered is along the North Shore of Amisk Lake.

Read: Finding Spots that were Missed (or Avoided) by the Early Gold Miners

Of all the areas where gold deposits have been discovered in this province, only a few have active mining operations set up today. There are a good number of operational gold mines in Saskatchewan producing a decent amount of gold every year, but much of this is due to personal interest in gold prospecting rather than doing it as an economically viable venture.

Fine gold deposits have been found in both North and South Saskatchewan River, Beaver River, Assiniboine River, Churchill River, and many other small creeks and tributaries that feed into them. Because the gold is very fine and not economically viable in most areas, there are many gold occurrences have never been documented. It will be up to the prospector to explore new areas are unearth new raw gold deposits.

Saskatchewan is not famous for its gold deposits, but does sits on some of the world’s largest deposits of both potash and uranium. Potash mining in the region is quite extensive and, the mines are among the largest in the world.

Some mining operations are already at work in areas such as the Churchill sub province. This area has only been partially prospected and gold deposits discovered which are viable for exploitation. Other mines that have produced reasonable quantities of gold include Jasper mines, the Box mine and the Prince Albert mine. However, all these operations have been shut down for decades. Presently, the SeaBee mine still produces a good quantity of gold and its mother company is looking to open a new mining operation around Amisk Lake.

Waddy Lake and Contact Lake areas are also producing gold is being mined with a lot of success. Prospecting is being conducted around LaRonge Domain.

Harsh winter conditions, particularly in the northern part of the Province, has certainly limited exploration here.