Have you ever tried metal detecting for gold nuggets? If you have, there is a good chance that you found some trash, old iron junk, probably a few square nails, but didn’t find any gold. No doubt, finding gold with a metal detector is challenging. However, this story might give you some motivation to keep hunting. 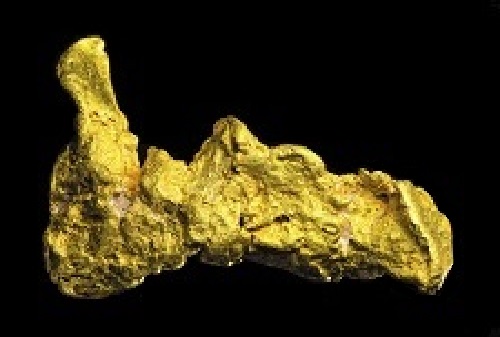 Back in 1989, a prospector using a metal detector found a gold nugget that weighed an unbelievable 389 troy ounces!
The nugget was unearthed somewhere in the Sonoran Desert, about 100 miles south of the Arizona border. Due to its interesting shape resembling a boot, it was named the Boot of Cortez.

Mexico is certainly known for being rich in gold and other valuable minerals. In fact, there are some very large gold mining operations in Mexico that are currently finding considerable amounts of gold.

There are also a number of reasons that Mexico is much less prospected than many other areas. For one thing, the harsh desert climate certainly limits the ability to work in the area. With virtually no water, traditional placer mining methods will not work. The only realistic mining methods for the small-scale gold prospector are metal detectors and drywashers.

Nuggets like the Boot of Cortez are exceptionally rare. In fact, it is the largest existing gold nugget found in the western hemisphere! There have been some larger nuggets that were found during the early gold rush days, but they have all been melted down and sold for their gold content.

It is nearly 100 ounces larger than the 2nd largest nugget found, which was recovered at a placer mine in Alaska.

Gold nuggets like the Boot of Cortez are highly collectable, if for no other reason than the fact that they are exceedingly rare. Just think about all the mining activity that has taken place over the past few centuries around the world. There have not been any nuggets that even come close to this one found in recent years.

Most of the best gold nuggets that are found today are unearthed with the help of a metal detector. The reason for this is simple; they are designed to find larger gold, and with a metal detector you can cover lots of ground. They are especially efficient at exploring virgin ground quickly and efficiently.

The prospector who found the Boot of Cortez was only using a very cheap metal detector from Radio Shack. Today there are certainly better options out there, although with a nugget of this size pretty much and detector would find it.

Most professional miners today who metal detect for gold are using the Fisher Gold Bug or one of the quality pulse induction Minelab metal detectors. These are proven to be able to find gold throughout the world.

Many prospectors think that all of the gold has been found, but think about it… this nugget was found in 1989. There have been Spanish explorers and white miners searching for gold in Mexico for centuries. And none of them found this nugget.

There is no doubt that there are other large nuggets out there waiting to be unearthed. In fact, I would not be surprised if one of these days, another gold nugget is recovered that is even larger than the Boot of Cortez!

More about Gold in Mexico