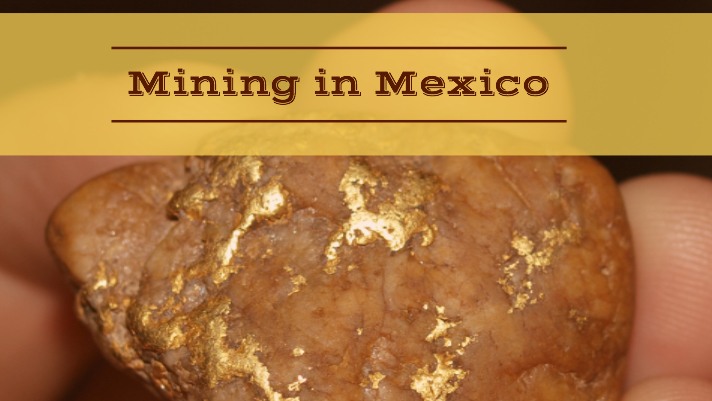 Mexico is no stranger to mining; in fact it has become a leading producer of many valuable minerals including precious metals.

Silver is what Mexico is well-known for, and it is currently the world’s leading producer of the metal. Significant amounts of gold are recovered as a by-product of the silver mines.

The rich deposits that have resulted in such wealth for the country of Mexico were discovered in 1550. The Veta Madre of Guanajuato was followed by the discovery of El Oro, an immensely rich mining district that has been worked for over 450 years now and resulted in millions of ounces of gold being produced.

Mining in the Mexican Desert

Since much of Mexico has an arid climate, the working of small deposits of gold by small-scale “artisanal” miners requires special techniques and has significant limitations.

The lack of water prompted the creation of a device that was later used all throughout the western United States in various gold districts. This invention was the arrastra. It was a mechanized device used to pulverize high-grade ores. They were circular in shape and generally used donkeys to drag large rocks overtop of ore to break it down do fine dust.

Remnants of old arrastras can still be found all over Mexico and the western U.S. In later years, the advent of the modern stamp mill help to increase the efficiency of crushing ores.

One very rich gold mining area in Mexico is found in the Senora Desert, south of the border with Arizona. This region has produced gold for centuries.

Prospecting methods are primarily limited to the use of drywashers in this part of Mexico, because water is non-existent in many of the richest areas. This technique is very labor intensive and can be more challenging to sample and trace lode sources of gold than with traditional placer mining techiques.

Another method that is now used throughout Mexico with good success is metal detecting. With the use of a metal detector, prospectors can locate gold nuggets within gulches, washes, and benches that have no water most of the year.

This amazing nugget remains the biggest found on this half of the Earth, dwarfing the next largest nugget (found in Alaska) by over 100 ounces!

The country is home to many exceptionally rich commercial mines. Many of these mines extract what would be considered low-grade ores. However, on a large-scale these ores can be mined very profitably.

The Sierra Madre Occidental Range is home to many large gold mines, producing copper, silver, gold, and a variety of other minerals.

Grupo Mexico is the largest mining company operating in the Senoran Desert. It is one of the leading gold producers in the country.

Goldcorp also operates the Penasquito mine and is a leading producer of both gold and silver. The San Pedro Mine in San Luis de Potasi is another rich gold producer.

Mining has a significant impact on Mexico’s economy. The industry is a major job creator and employs thousands of Mexicans. Low labor costs make the country very attractive from an economic standpoint, and most of the world’s largest mining companies are operating in Mexico.

The downside of mining in Mexico is safety issues and civil unrest. There have been many stories in recent years about robberies at mines. This has certainly limited the scope of mining and exploration to some extent.

Especially on a smaller scale, it is not advised for prospectors from the United States to venture south in search of gold. Although there are many gold districts in northern Mexico that have not been prospected to their full potential, there are serious risks associated with many of them, especially near the border where issues of drug and human trafficking exist.