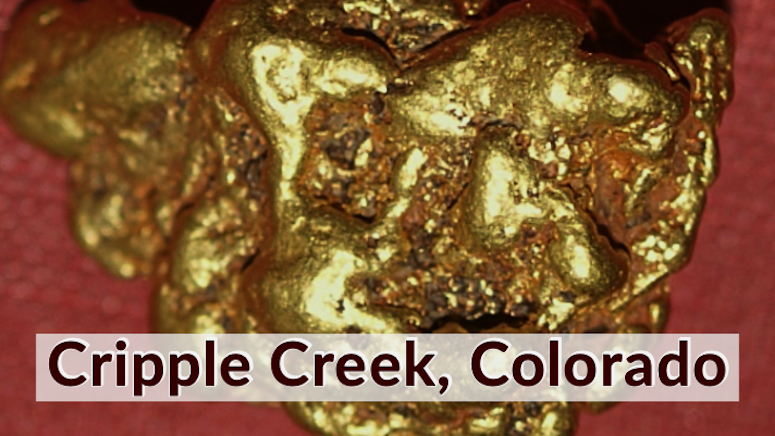 The former mining town of Cripple Creek grew out of nowhere when lode gold deposits were found. Named the Independence Lode, it became one of Colorado’s richest gold strikes, and also the last major gold rush to Colorado.

About 100 years ago, prospective miners flocked in the area in search of gold and silver. Gold was first discovered by Bob Womak in 1890. What started as simple placer discoveries soon led to discovery of rich vein deposits. This prompted the gold rush which was later to become a significant part of the history of the state.

By the start of the 20th century, the town of Cripple Creek was fully established with a railroad passing through and about 500 claimed mining operations. The town had also produced more than 22 million ounces of gold by 1910 with no signs of slowing down.

The year of 1900 was particularly productive with production reaching $18 million dollars in gold and silver.

Like any other mining district, Cripple Creek had its fair share of challenges. For starters, gold was contained in gold-telluride minerals, which was very challenging to extract when compared to normal free-milling type ores. Rather than use the classic stamp milling and amalgamation process used in other mining towns, the companies employed chlorination. This was later replaced by cyanide leaching.

The city suffered two disastrous fires in 1896 that burned down almost half of the town. Both occurred within less than a week and though they didn’t particularly affect the mining operations, most of the business section was destroyed. It took a while to rebuild the town to its original state. Some of the buildings built during that time are still standing to date.

Frequent labor strikes that threatened to stall mining activity became common in later years at Cripple Creek. In 1894, miners went on a five month strike after work days were lengthened from 8 hours to 10 hours. Violence erupted between workers and company-paid militia that consisted of the sheriff’s deputies. To restore order, the governor instituted martial law and dispatched the army to Cripple Creek. It was only when the 8-hour work day was reinstated that workers went back to work.

In 1903, there were labor strikes that ended in dispatch of the National Guard to the area. By the end of the strikes, the Western Federation of miners was driven from Colorado mines altogether. 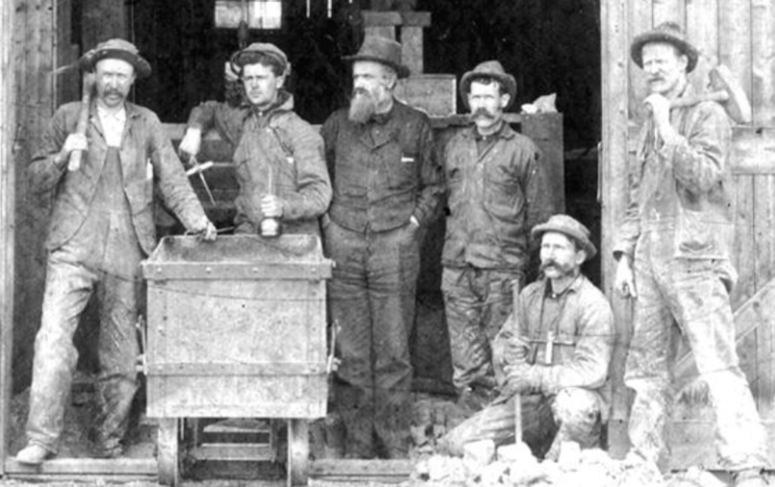 Deeper and Deeper They Go

As time passed, gold on the surface mines was exhausted, prompting even deeper exploration to extract ore. The deeper they got, the worse the drainage was, and pumping methods were not efficient enough to keep water out the shafts. Drainage tunnels were dug to reach major mines. Of these, the Carlton Tunnel was the longest and drained from the Vindicator Mine.

Cripple Creek Mining District was particularly famous for large mines and having produced many millionaires. Independence Mine, discovered by Winfield Scott Stratton in 1901, was later sold for $11 million to Venture Corporation England. Portland Mine closely bordered the Independence Mine and provided jobs to 700 miners at one time. Spencer Penrose’s C.O.D Mine also produced enough to finance building the famous Broadmoor Hotel.

Mining in Cripple Creek began to dwindle at the start of World War II when the government banned mining of no-essential metals.

Cripple Creek remained dormant until the 1970’s when Texasgulf and Golden circle formed Cripple Creek and Victor Mining Company. Open Mining permits at the Cresson Mine were later issued in 1994 and from then, production improved. Ownership of the company has changed significantly with present owner being Anglo Gold Ashanti Corporation. 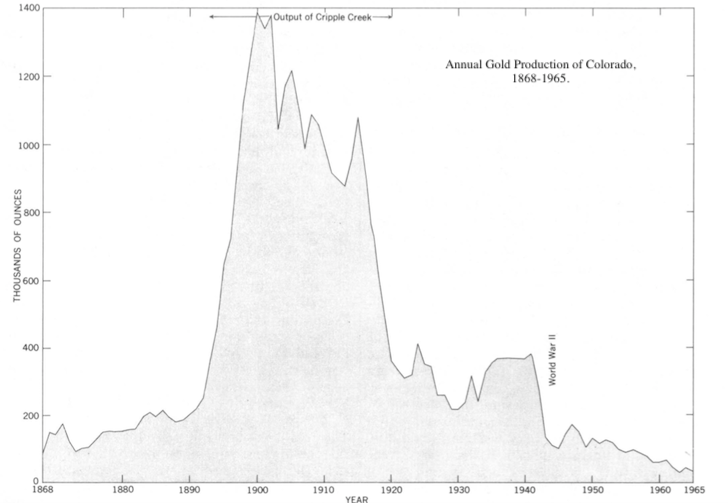 The peak of Colorado’s gold output came when the mines at Cripple Creek were being worked. This area is still far and away richest historic gold producer in the entire state.