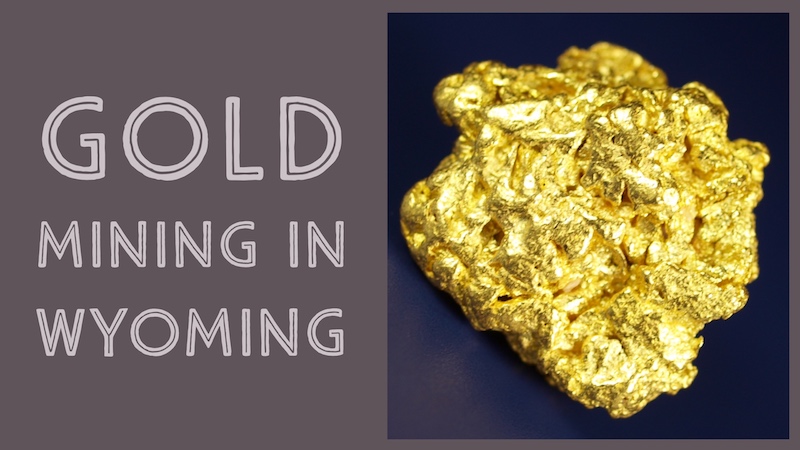 It is believed that the Spaniards discovered gold in Wyoming as recently as 200 years ago. The first discovery that we have record of today was along the Sweetwater River, where placers were found sometime during 1842.

This area would later become the Atlantic City-South Pass District. It is theorized that trappers had taken the time to prospect the area and made these discoveries, but the original discoverer either died or was killed before the news of gold in the area spread.

At the time of the discovery, there were still ongoing hostilities with the Indians, and so the sudden spike in mining interest so common to other states did not materialize.

This discovery did lead to small groups of armed prospectors attempting to mine gold along the Sweetwater River, but this was a limited and dangerous endeavor due to the privations and Indian raids.

By the late 1860s to early 1870s, the gold from Sweetwater River had been traced upstream to the Carissa lode. This event prompted Wyoming’s first true gold rush and the creation of several mining districts.

The Atlantic City-South Pass district was the largest of these, located at the southern tip of the Wind River Mountain Range in Fremont County. While total production figures are unknown, it is believed that as much as 325,000 ounces of gold have been mined from this district.

For those hunting for specimen-grade gold samples, the South Pass greenstone belt (southeastern margin of Wind River Mountain Range) just might be the best place to start. This district encompasses veins as well as shear zones or faults that are gold bearing. Lander is situated about 23 miles to the south of this district. A large part of Wyoming’s overall gold production was sourced from here. 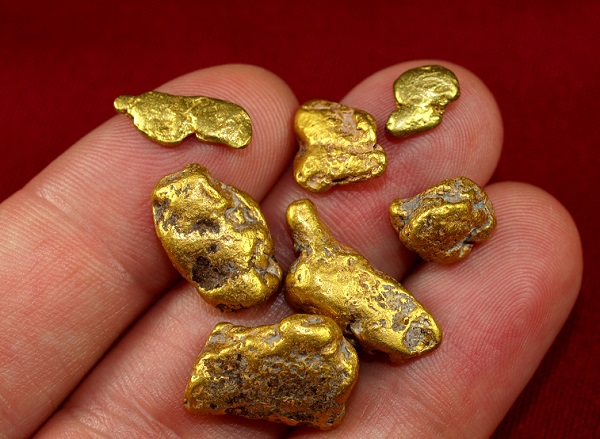 There aren’t a lot of places in Wyoming that will produce large gold nuggets, but they are out there if you know where to look!

The discovery of gold in other mountain ranges has further resulted in the creation of several other mining districts, most notably the Douglas Creek District spanning the Carbon and Albany counties, the Negro Hill District in Crook County, and the Snake River placers just south of Yellowstone National Park. Similar to South Pass, total production figures are unknown due to inaccurate or non-existent records.

The Wind River Mountain range crosses the eastern side of Sublette County into the southwest side of Fremont County. At the base of the range (Fremont side), on the southeastern tip of the mountain range is the Sweetwater mining district. This broad district includes the gold camps of Atlantic City, Miners Delight, Lewiston and South Pass. These camps were established after the gold rush of Wyoming, which was prompted by the discovery of the Carissa lode (in turn prompted by discoveries of placers along the Sweetwater River).

Placer mines in the Douglas Creek District can be found along much of Douglas Creek proper and several tributaries. The placers were found in an area along Douglas Creek about fifteen miles long and ten miles wide. Much of the production is attributed to a gold-quartz vein found in the Keystone Mine.

And: Gold Mining in Colorado

The turn of the century saw the decline of gold production and the shift of mining interests towards copper. Through 1959, total gold output was pegged at about 82,000 ounces. The gold production decline in the area can be attributed to myriad factors, such as losing the vein in a fault, difficulty of access, more mining interest in other states or even the bankruptcy or mismanagement of the mining company.

However, this should not discourage those looking to mine in Wyoming. There is very little evidence to support that Wyoming has exhausted all gold resources, and the current sources are far from mined out. The state’s mineral history shows gold discovery spanning all the mountain ranges in the state. Both lode and placer deposits have been found at one point or another despite the relatively low attention given to Wyoming’s mining industry.

Next: The Lost Cabin Mine in the Bighorn Mountains