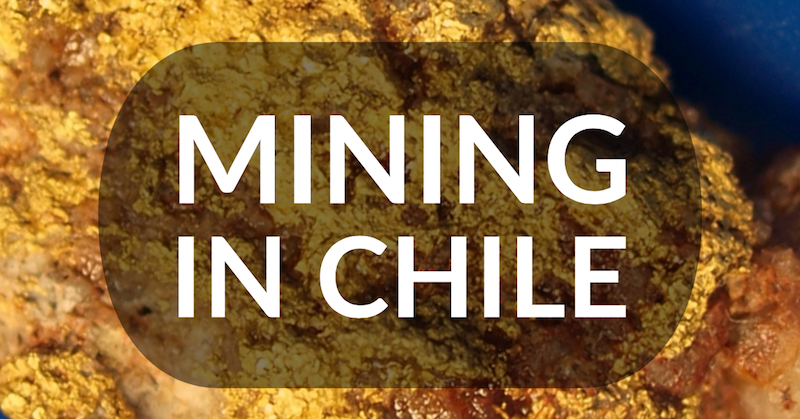 The mining industry is perhaps one of the most transformative forces in the world. Places that were once barren and deserted have turned into thriving centers of development, all from faint whispers that gold, silver or any precious metals could be found in that area.

Chile is one such country that can attest to this curious phenomenon. What once was a small group of Native American settlement sites has grown into a stable, prosperous land. Indeed, much of its success can be attributed to mining. Chilean copper exports account for a whopping one-third of government income.

Because Chile is largely associated with copper, many overlook the fact that it has quite a golden history. Conquistador Diego de Almagro was out looking for gold when he set foot in Chile in 1535, and the Spanish conquest began in earnest five years later. By looking through Chile’s storied past, we observe its four cycles of significant gold production.

It was a smart move on Valdivia’s part to build the first Chilean gold mine at Marga Marga, after he learned that placer gold mines had been worked there to pay Inca tribute. Mapuche Indian hostilities made the initial Spanish conquest quite unstable, but soon enough Valdivia’s investment paid off and Chile began contributing to Spain’s coffers.

Within the first 6 years, the Marga Marga mine’s gold output was roughly at 1,060 kg. This was enough to propel the new land’s popularity, and in 1544, the town of La Serena was founded close by to support the mining activities in Andacollo.

By 1551, gold smelters had been established in La Serena and Santiago, and the quest for gold continued towards the southern regions of Chile. Rich placer mines were found at Quilacoya near Concepcion, a town founded in 1550, and more formal settlements were established to support the gold mining activity.

Gold was found in Carahue, near Villa Rica, and in Madre Dios near Valdivia and near Osorno. These southern areas were the most significant sources of gold during this period. The “Valdivia gold” from Madre Dios was reportedly the finest and most abundant in Chile at the time. The rich alluvial deposits found in these early years of conquest produced roughly 1-2 metric tons of gold per year.

Gold mining activity began to decline at the end of the 16th century, largely due to the Mapuche uprisings. Mining activity was constantly interrupted and costs went to defensive necessities required to stave off attacks. In 1598, a major militant loss at Curalaba led to the abandonment of the southern towns and gold mines.

Santiago and La Serena continued to produce gold, although at a decreased rate compared to Chile’s earlier peak years. Chile’s agricultural sector grew in response to the waning mining industry, and only Andacollo remained in terms of significant gold production.

Mining activity boomed a second time when a financier named Francisco Garcia Hudobro helped establish a royal mint in Santiago in 1749. Gold production reached 800kg annually by 1760. The focus shifted towards vein mining, where gold ore was milled in trapiches and recovered with mercury.

The 19th century saw political turmoil, the boom of silver, copper and nitrate mining activity as well as the Tierra del Fuego gold rush. However, gold deposits in the area were quickly depleted, and today Tierra del Fuego is credited largely for oil.

Other gold rushes that occurred during this period led mining focus away from Chile and towards California and Australia. Chilean gold largely came about as a by-product from silver and copper mining, hovering around a production level of 2,000kg per year.

The third cycle came about when gold mining activity boomed in 1933 due to the rise in prices. Sierra Overa was the only new district found at the time, with most production coming from old, reactivated mines. Production peaked at 11.5 metric tons in 1939, waned to a steady 2 metric tons from 1960 onwards, and finally surged once more in 1971 when the gold price was liberated.

This would mark the start of Chile’s fourth gold production cycle which saw the fruitful reactivation of the El Bronce vein mine in Petorca and the discovery of sub-volcanic, mainly epithermal gold deposits 4,000 meters above sea level in the Andean Cordillera (initially El Indio). Advances in technology led to the development of Choquelimpie, La Coipa, El Hueso, Tambo, Marte, San Cristobal, and Guanaco.

Gold production spiked to 21.6 metric tons in 1989 and snowballed due to the renewed mining interest throughout the country. Cerro Casale was discovered in 1996, and is reportedly one of the largest undeveloped gold copper deposits in the world, located 145 kilometres southeast of Copiapó. La Falda, a near-surface porphyry, was also found to bear epithermal gold-silver. Barrick and Kinross Gold are but a few of the mining companies present in Chile. Several notable projects such as the Pascua-Lama project on the Chilean-Argentinian border are underway.

Next: Mining for Gold in Argentina