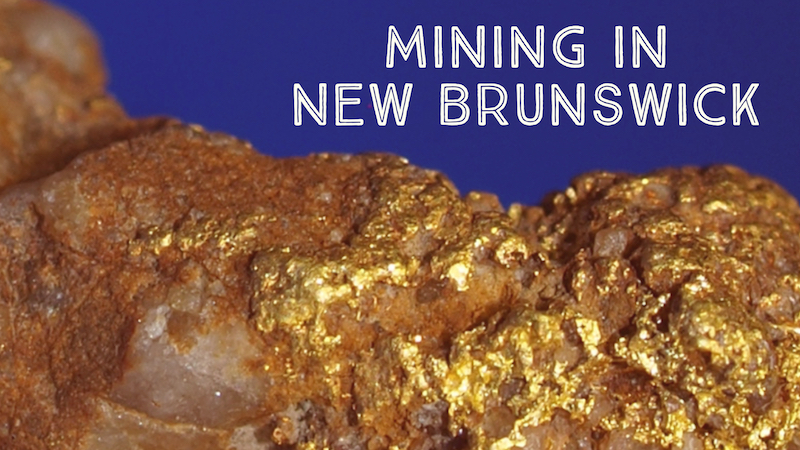 New Brunswick produces a wide variety of base metals, and most of the major mines in the province are working deposits of copper, zinc, and lead. In fact, some of the world’s most significant copper deposits are mined here, with considerable reserves of ore still present in the ground. Considerable interest is still being given to this region today.

When the earlier gold deposits were being discovered in nearby Quebec, New Brunswick was more or less overlooked as a potential region for gold mining.

Since that time, there have been gold sources that have been discovered, although on a commercial scale it is generally still the copper and zinc deposits that are garnering most of the interest. That is certainly not to say that gold is not present; in fact for the individual prospector there are probably many areas that hold good potential for gold prospecting that have been virtually ignored.

Since most individual prospectors are searching for gold large enough to be found by panning, it is important to seek out areas where gold has been found (or is likely to form) with enough coarseness that it can be identified. Many of the larger mines in New Brunswick do produce some gold as by-product, but these are generally locked up in sulfides that the average gold prospector will be unable to economically recover.

Coarse, free-milling type gold has been found in quartz veins near major geologic fault locations within the province. The Appalachian Mountains that cover the eastern United States also venture into New Brunswick, and these were formed by collisions of faults. Anywhere that geologic evens occurred where rapid heating and cooling occurred, there is potential for gold formation.

The Bathurst mining district might be the best areas to start your search for gold in northeast New Brunswick within the Nepisiguit River valley. It is primarily a copper/zinc mining area, but recent discoveries by junior mining companies have shown that there are considerable amount so silver and gold also available in some areas.

Since profitable extraction of precious metals requires a different process than with base metals, the exploitation of these resources is not totally in place. Yet the potential is certainly there, especially considering the large amounts of ore that are extracted from the larger mines.

A company named Stratabound Minerals reported that drilling samples showed visible amounts of lode gold in an area near the Bathurst. Anytime that gold is visible within host rock, there is potential that it can be deposited within alluvial deposits in creeks and rivers.

The placer gold occurrences in New Brunswick are not well documented, and are not likely to be found on any considerable scale. Much like the extremely rich deposits that are being mined in Quebec and Ontario, most of the mining areas do not produce gold that is recoverable as placer sources.

When gold prospecting in New Brunswick, you would be well advised to sample areas around the major mines located along significant faults. These are the places where visible gold is most likely to occur.

Additionally, you should always use the best mining equipment available for capturing fine gold, as any gold that is found in the creeks and rivers of New Brunswick is almost certain to be of small texture.

Historic literate does not make mention of large gold nuggets being found here, and while it is always possible that you will discover a rich strike that has never been found before it isn’t likely. You are much more likely to find finer textured gold. Still, in the proper area using careful mining techniques, fine gold deposits can be fun to work and may even be profitable.

And: Gold in Newfoundland & Labrador

Back to Canada Gold Map