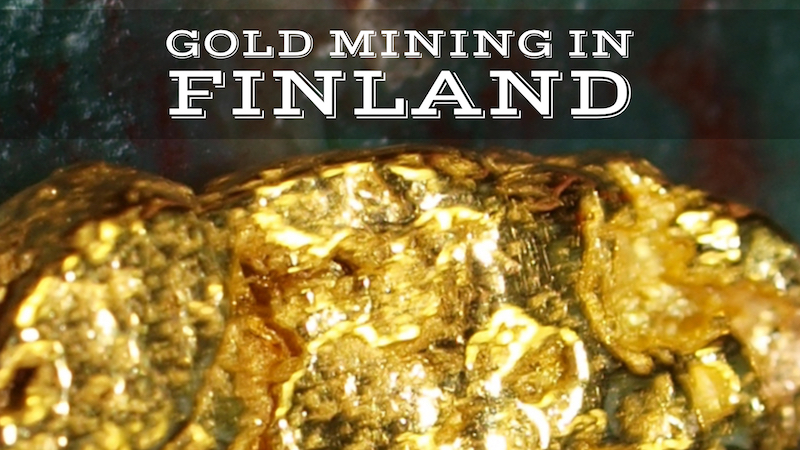 Finland was an unexplored country in terms of gold for much longer than many other European countries, but large gold discoveries in recent years have attracted significant interest to the country by large mining companies.

There are many precious metals and gems found in Finland including platinum, gold, and diamond. There is also a thriving industry producing base minerals and industrial metals.

In Finland, gold deposits occur within greenstone belts, along with low-grade cobalt, copper, and massive sulfides of nickel. Most of the mining operations that are exploiting these reserves are finding anywhere from 0.1 to 1.0 ounce of gold in these large deposits, generally on the lower end of the spectrum.

Gold is also found in the Tampere schist belt of southern Finland. The Kutemajarvi gold mine is located here, which produced almost 13 tons of gold from 1.4 million tons of ore between 1994 and 2003.

Additional gold deposits were found in the Baltic Shield of Finland, and in the northern regions along the Greenstone belts of Lapland. In Lapland, only a few gold deposits are found that have a typical kind of mineralization. Apart from gold, these deposits also contain nickel, copper, uranium, and cobalt.

Between 1869 and 1900, the first gold deposits were discovered in Lapland near the Ivalojoki River.

In 1935, Evert Kiviniemi discovered the largest chunk of gold known to have been found in Finland. It weighed over 12 troy ounces, a considerable nugget for Europe! He discovered it near Laanila at the Luttojoki River. In 1945, gold deposits were also found on the Lemmenjoki River. The placer gold deposits in the Ivalojoki and Saariselka hold good potential and prospectors can still find gold in this area.

Diamonds are another mineral that have garnered attention in recent years. The first discoveries were made in the 1980s, and while the occurrences have been known for several decades attempts put a commercial mine into operation only started last year.

A four hectare open-pit mine is currently being proposed in Lahtojoki, about 30 miles east of Kuopio. While the mine is still being proposed and not currently in production, they are estimating the ability to process 600,000 tons of ore. Most of the diamond resources here are believed to be of commercial grade.

Several mines in Finland also mine platinum and palladium metals.

Commercial mining interest has been very high in Finland in recent years. Some very large companies are performing explorations research and developing new mining operations within the country. A few of the main companies are listed below:

Nordic Mines: Headquartered in Sweden, Nordic Mines is currently running operations in three areas of Finland. The main focus of this mining enterprise is to establish mining projects and explore gold and other metals.

Agnico-Eagle Mines: Agnico-Eagle is the owner of the Suurikuusikko mine, also called the Kittilä mine, located in the province of Lapland in Finland. This mine is among the biggest gold mines of Europe, having an estimated reserve of over 4 million ounces of gold.

Dragon Mining: This mining organization runs three companies in Finland, which are, the Jokisivu gold mine, the Vammala Production Centre, and the Orivesi gold mine.

Finland has a rich history of gold. Hundreds of gold deposits in a variety of mineralization styles are said to be present in Finland. Especially in recent years, it has been gold that has attracted attention to the area even more than the base metals that were mined here for centuries. This country may be one of the best in Europe as far as potential for continued gold production in the coming decades.

Next: Gold Mining and Prospecting in Sweden