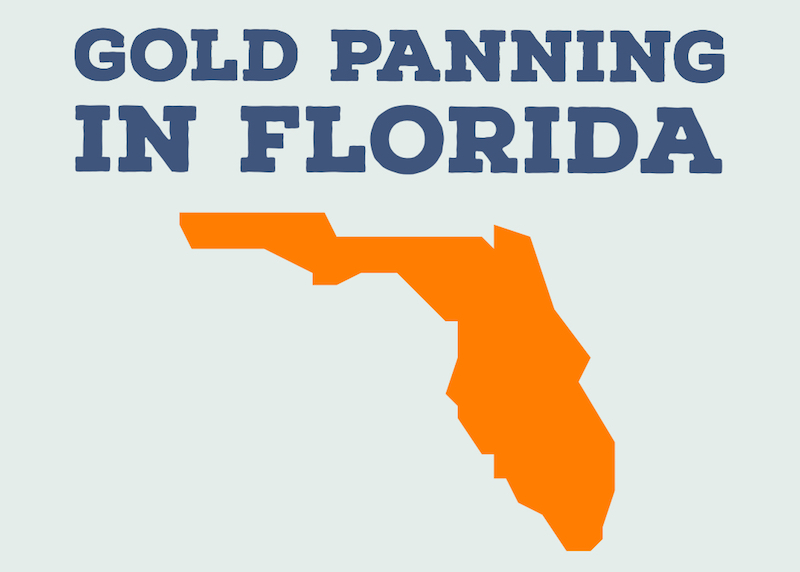 Unfortunately, Florida is a very poor state to prospect for gold. In fact, it is quite possibly the poorest place in the United States to find natural gold occurrences. This is due to the geology of the state.

The Florida Peninsula is almost entirely composed of limestone, a sedimentary rock that is primarily made up of calcite and aragonite. It is actually made up of tiny bits and fragments of once-living organisms. Bits of coral, shells, bone fragments, and any number of marine organisms that have called this state home for millions of years.

Unfortunately, limestone deposits in Florida are not gold-bearing. The limestone itself has a variety of different commercial uses, but for gold prospectors it is of little interest.

There are no known gold deposits in Florida. In fact, it may be the only state in the United States where there has been no gold discoveries.

If you live in Florida, you aren’t completely out of luck! While the state may not have any natural gold occurrences, it does have plenty of other opportunities of the treasure hunter.

Florida is certainly known for its Spanish shipwrecks, lost treasure tales, and a variety of buried treasure stories that are indeed very real. The during the 16th and 17th century, considerable wealth was being transported from Latin America to Spain, as explorer pillaged civilizations in search of gold and silver.

There are many documented, yet undiscovered shipwrecks around Florida, and coins can be found washed ashore on many beaches. You won’t find this gold by gold panning, but a metal detector will certainly work!

Another way that Florida treasure hunters can find gold is by looking for modern jewelry on the beaches. Tourists are always losing gold jewelry.

Of course, for the diehard prospector this may not work. If you are set on going prospecting for gold, then you are going to want to head north. While Florida is a lousy state to find gold, just to the north you have many options.

Georgia is actually one of the best states on the east coast to find gold. There mines here are well documented, and many creeks and rivers in Georgia will produce placer gold deposits. Miners can use pans, sluices, and suction dredges to recover good gold here.

Surprisingly, another good state to explore is Alabama. Most people don’t realize that there is gold in Alabama, but indeed there is! The same mineral belt that passes through the gold-bearing states in the Southeast also extends into the eastern portion of Alabama. There have actually been some nice nuggets found here too.

More about Gold in Alabama and Georgia