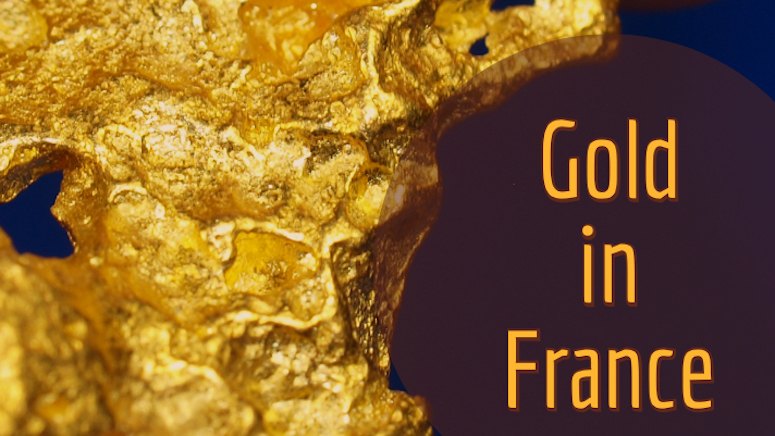 Europe has always taken a back seat to other parts of the world when it comes to gold production. Although there have certainly been significant gold finds in Europe (such as the major sources in Romania for example), these mines generally pale in comparison to the gold sources that are mined in Australia, Canada, and throughout Latin America.

This certainly doesn’t mean there is no gold in Europe; it just means there have been no significant sustained gold rushes like there have been elsewhere in the world. Most gold sources here are relatively small, but small-scale prospectors can find gold by panning in creeks and rivers in many areas.

Although not considered a major gold supplying country by any means, there have still been some nice gold finds in France.

As proof that minor gold mining has been done for a long time in France, one only need to look at the writings of ancient Gaul tribesman. As far back as 100 – 200 BC there is evidence that gold was being discovered in the Limousin region in Southern France.

There have been several small discoveries of gold throughout the ages in France but few of them amounted to much on a commercial scale.

France’s Exception – The Salsigne Gold Mine

This open pit mine in the South West of France (located near the southern tip of the Massif Central mountain range near Carcassonne) is known for producing profitable gold ore.

It was first mined by the Romans who valued the iron they got from the ore there but their smelting process at the time did not discover the gold that much of the ore contained. All this is ironic because the Romans prized gold very highly and missed out on an estimated 25 tons of gold.

It was not until 1873 that the area was actually mined again, but this time it was for arsenic.

The gold was discovered there in 1892 and mining operations commenced off and on until the present day. The most robust period for gold discovery was around 1908 when they were finding about 100 kilograms of gold per year.
During the past decade, the Salsigne gold mine was by far France’s most productive gold mine.

There are other smaller gold mines throughout France, mainly in the southern region. Prospectors would be well advised to delve into historic literature and learn more about these mines that have long been abandoned for clues to future sources of gold.

In 1982 gold mining started to pick up in the Le Bourneix area and then grew even more when a big player named the Cogema Group acquired a French company in the region in 1988. Annual production went from 500 kilograms to over two metric tons of gold a year. As the price of gold fell into the 1990s, the company was forced to shut down in 2002 as mining costs outpaced the price of gold.

The only active mining company that remains today is based in the Salsigne region, but operations were scaled back considerably after the original owners filed bankruptcy in 1999. It is actually being run in receivership and is scheduled to slowly cease operations over the next few years.

There are certainly some rivers and streams in France that will produce small amounts of placer gold for recreational prospecting. Any of the waterways that flow into southern France from Switzerland have potential for gold. There are several rivers around southern Brittany near Northern Loire that will produce gold by placer mining. Loperec River is a known gold-bearing area.

Bretagne is another area where many of the creeks will produce fine gold by panning and sluicing. Prospectors in France and throughout Europe will find that using careful methods that do a good job of capturing fine gold results in the best luck, as nearly all of the gold found is very fine textured.