The legend of the Lost Lemon Mine seems to have everything you could ask for in a lost treasure story – madness, murder, possibly a curse, and gold.

It shouldn’t surprise anyone that this story has more than one version, since most lost gold stories tend to grow and change with time, but most of the accounts agree that unfound gold exists in the Canadian Rocky Mountains.

Essentially, the story concerns a prospector known as Blackjack, who was considered to be the West’s best prospector and whose discovery started the gold rush to the Cariboo district in British Columbia, and his partner by the name of Frank Lemon. They departed Tobacco Plains, Montana with a group that intended to pan for gold in the North Saskatchewan River, but at some point, these two decided to leave the group and go it alone.

After some unsuccessful attempts to pan the North Saskatchewan River, Blackjack and Lemon decided to give it up and go back to Tobacco Plains. Since the Blackfoot Indians often killed gold prospectors, they briefly joined up for protection with some Indians on the way to Fort Stand Off, but left them at some point and headed up an Indian route into the mountains up High River.

A pioneer historian by the name of Freda Bundy thought this trail might possibly have been an old pack trail through Racehorse Pass, leading into the Elk River Valley. Following the Elk River would have lead them to the Kootenay River, which would in turn have led them back to Tobacco Plains. Upon reaching the headwaters of Racehorse Creek they decided to try their hand at panning and had great success getting gold out of the river bed. Not long after they discovered a rock ledge nearby that contained veins of solid gold.

This is where the trouble begins. The two had a fierce argument over whether they should leave and come back to the mine the following spring, or stay and dig out as much gold as they could carry. Nobody seems to know which fellow favored which plan. Since they could not reach agreement, eventually they went to bed.

Although Blackjack fell asleep, Lemon lay awake for some time, getting madder and madder. At some point during the night, he jumped up, grabbed an axe and split Blackjack’s head open.

In a state of panic over what he had done. Lemon determined to head out in the morning, leaving Blackjack where he lay. During the night he began to hear wailing and carrying on, and thinking the spirit of Blackjack was haunting him, he completely lost his mind. Although Lemon never realized it, the moaning and wailing was coming from two Stoney Indians, who had seen their gold discovery as well as the fight and the ensuing murder. After telling the story to their chief, the Indians were sworn to secrecy as the prospect of a gold rush on Indian land was not in the best interests of the tribe.

When morning came, Frank Lemon headed back to Tobacco Plains and found one of his friends, a seminary student masquerading as a priest. After making his confession to the “priest” and showing the gold he had brought back, the priest sent a man by the name of John McDougall to see if he could verify the gold find. Supposedly he found the area, gave Blackjack a decent burial, and hightailed it back to Tobacco Plains. However, Indians that had been tracking his movements destroyed any evidence of Blackjack’s grave, as well as any sign that McDougall had ever been there.

Meanwhile, Frank Lemon was in precarious mental health. In the spring he was convinced by a bunch of prospectors to take them back to the mine, but the closer they came to the gold the more bizarre Lemon’s behavior became, and he maintained that he was unable to remember where he was going. 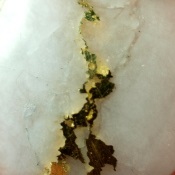 When the prospectors accused him of lying to them about the gold, he came completely unglued and had to be taken back to Tobacco Plains in restraints. He never recovered and ended up in Texas where his brother owned a ranch, and there he died.

Meanwhile, the priest who had heard Lemon’s confession, determined to claim the mine as his own. He again called on John McDougall to lead the expedition in 1872. McDougall was conducting some business in Fort Benton, Montana and when he finished up he headed out to meet up with the party. Unfortunately he made a stop at Fort Kipp, Alberta, where he got into some bad whiskey and died during the night. Being the only white man who actually knew the location of the mine, that particular expedition was cancelled.

And: Gold Panning in Alberta Rivers

After a couple more unsuccessful expeditions mounted by the priest, a fellow by the name of Lafayette French came to Alberta and began to search for the mine. After falling ill, he had to return home, but for 30 years after that French continued to hunt for the Lost Lemon Mine.

As time want on and one misfortune after another befell the prospectors, French began to believe there was a curse on anyone who came anywhere close to locating the Lost Lemon. At one point, one of the Indians who had frightened Frank Lemon half to death after he murdered Blackjack agreed to lead French to the gold. The Indian died suddenly during the night, but French determined to go on and attempt to find it without his help.

Supposedly, French did find the Lost Lemon based on a letter that he sent to a friend, but on his way to Fort Benton he camped in an abandoned log cabin, which caught fire during the night and burned him badly. Although he was able to struggle through the snow for a couple of miles to the Bedingfield Ranch for help, he died during the night before being able to divulge the location of the Lost Lemon.

Maybe the Lost Lemon Mine is cursed, and maybe it’s not but one thing is for sure. It is still lost.