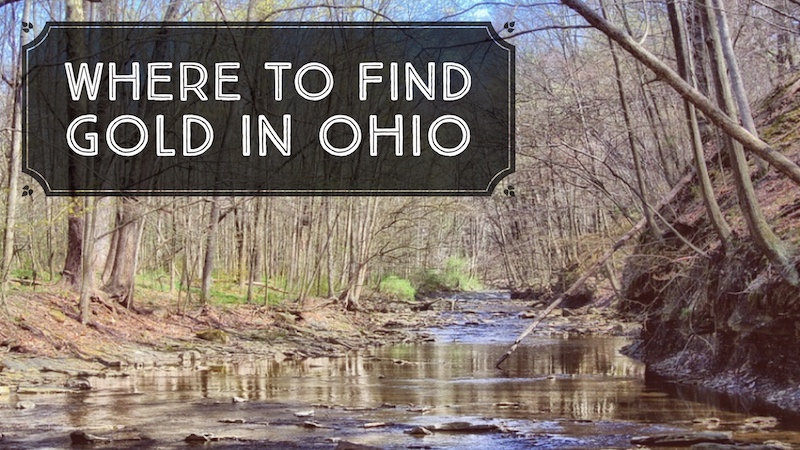 This part of the United States has never really been a hotbed for significant gold finds even though there are some extremely rich gold sources just to the north in Canada. With that being said, states such as Ohio are not devoid of gold finds either.

Gold happens to be found in abundance in Ohio by the many hobby prospectors that search there, but the finds are relatively small and commercially insignificant.

Let’s take a look at some of the areas where gold has been found in Ohio and what the future might bring as far as gold exploration in the state goes.

Like many of the other states in the region, Ohio’s gold is largely thought to be the result of glacial movement throughout the area during the last ice age. It is part of the reason why the gold that has been found in scattered placer deposits all over the state.

Like other states that have glacial gold deposits, these finds tend to be very small in nature and yield nothing bigger than fine grains or even smaller traces of gold. It is enough to keep hobby prospectors interested, but no prudent commercial company would even think about trying to make a profit of off such small gold finds.

Glaciers were thought to cover over 2/3 of Ohio and not coincidentally most of the gold found in the state is where the ice was thought to be the thickest. Glacial movement acts like a large grinder that is powerful enough to separate the heavy precious metal from the ore it is contained in.


I created a printable-PDF report about gold in Ohio & Pennsylvania that you can print out and save for your records. It’s Free. Click here to get it.

The most excitement that gold has generated in the state of Ohio was in an area north of Bellevue in Richland County back in the late 1800’s when some large flakes were being found in abundance near the Clearfork River and other streambeds in the area. This find fizzled out pretty quickly as the area was overwhelmed by prospectors looking to get rich.

There are several creeks within the county that are known to produce gold, including Honey Creek, Friends Creek, and Leatherwood Creek.

Commercial Gold mining in the state was set up in several different areas at different times during the 1800’s and early 1900’s in Ohio. All of these ended in financial failure.

There are known placer gold deposits in Stonelick Creek in Clermont County as well.

Prospectors have reported gold in Ross County as well in many of the creeks here. Distribution of the placers is very spotty and careful panning is needed to recover the fine gold deposits.

Future Prospecting in the State

There is one possibility that could lead to a big and commercially profitable gold operation being set up in Ohio. There is a layer of sedimentary rock that runs across a large portion of the state; this rock has the same characteristics as the sedimentary rocks found to the north of them in Canada that have yielded some significant greenbelt gold finds.

There are some commercial companies that have some interest in doing some test bores to see what results they can come up with but as of now this process is only in the planning stage. There is certainly no guarantee that these prospects will produce any significant gold discoveries, but the potential is certainly there.

So Ohio will continue to be a great place for hobby prospectors but it remains to be seen if there will be any large commercial finds that yield a large amount of gold.

And: Gold Prospecting in Pennsylvania

And: Supplement your Income with Gold Mining