There are many states in the U.S. where you can use pans, sluices, suction dredges and metal detectors to find gold nuggets. Most of the western states and some places in the Southeast have produced nice gold nuggets over the years. Below are five states that have not only been some of the most historically rich mining states, but also places where gold nuggets are still found on a regular basis.

It is no secret that there is plenty of gold waiting to be found in Alaska. It might be one of the best states in the country to find gold nuggets today.

There are rich gold districts all throughout the state, and a few of them have produced some exceptionally large gold nuggets.

The biggest nugget ever found in the state was found in Swift Creek near Ruby, Alaska. It was found in 1998, proving that not all of the big nuggets were found during the old gold rushes of past centuries.

There are numerous creeks and rivers that will still produce large gold nuggets. Some of the better known places include Ganes Creek; Mores Creek; much of the waters around Fairbanks; the Fortymile district near the town of Chicken; Anvil Creek at Nome. There are literally hundreds of areas here that have gold nuggets waiting to be found.

Check out article for more information about large nuggets in Alaska.

We all know the story of the California Gold Rush, and how much gold has been found in this state. Despite the fact that there has been active mining here for over 150 years, it certainly doesn’t mean that all of the gold nuggets are gone. Not by a long shot!

In fact, in 2015, an exceptionally large nugget weighing over 5-pounds was found by a prospector using a metal detector! Named the ‘Butte Nugget,’ it was unearthed in Butte County.

And that certainly isn’t the only big nugget found here. Historically, some of the biggest nuggets in the country were mined California’s Motherlode on the western flanks of the Sierra Nevada Mountains.

The best gold mining areas in California are in 3 distinct regions; in the Sierra Nevada Mountains, further north in the Siskiyou and Trinity Mountains, and in parts of the Mojave desert in southern California.

Mining on the Yuba River, Feather River, and American River

Arizona is probably the most popular state for nuggetshooting in the U.S. This is primarily due to the fact that there are so many areas that produce gold nuggets and there is good detectable ground.

There are many professional miners who spend the winter season metal detecting in Arizona. I know several folks who successfully find over a pound of gold in Arizona every year with metal detectors and drywashers.

The best counties to find gold nuggets in Arizona are Mohave, Yavapai, and Maricopa counties, but nearly any place in western or southern Arizona has potential for finding nuggets.

And: 6 Arizona Rivers where you Can Successfully Find Gold

And: The Best Gold Mining in Arizona: A County-by-County Breakdown

The state of Nevada is the largest gold producer in the country, with most of the gold coming from a few large open-pit mines located in northern and central Nevada. Most of these mines don’t produce nuggets, just extremely small gold that requires cyanide leaching to extract.

There are still loads of nuggets here though. The best known place to find gold is at Rye Patch in Pershing County. Located east of Majuba Mountain near Rye Patch Reservoir, there have been countless nuggets found here. And even though it has been hunted hard for decades, you can still find nuggets here.

There are many isolated gold districts found throughout Elko, Humboldt, and Pershing Counties. There is good gold to find here.

This is one of the best states to go “patch hunting” in search of undiscovered gold nugget deposits. This state is big and undeveloped in most areas. And there are lots of nuggets yet to be found.

And: This Nevada Gold Mine Produces Amazing Crystalline Gold Nuggets!

Oregon doesn’t get a lot of attention from gold miners compared to the other states mentioned here, but it has actually been a state that many large nuggets have been unearthed.

The gold in Oregon comes from two areas; in southwest Oregon around Grants Pass, Medford, and south to the California border. The best known gold-bearing rivers are the Rogue, Applegate, and Illinois. Althouse Creek was where some of Oregon’s largest nuggets were mined. The other region that gold is mined is in eastern Oregon, around John Day, Baker City, and east toward the Idaho border.

Both eastern and southwestern Oregon has produced good sized nuggets. The US Bank in Baker City has a neat display of gold nuggets from the early days that includes many pieces that weigh several pounds each.

Plus: 9 Places to go Gold Panning in Oregon without a Mining Claim

Just about every states in the West have places where to can find gold nuggets if you do your research. Finding new areas that haven’t been mined can be challenging, but sometimes these places that were already worked by the old-timers still have gold nuggets that were missed.

These 5 states are still great places to search for gold. I know professional gold miners in each of these states who are finding nice gold nuggets every year.

They haven’t all been found yet. Get out there and start looking. With a lot of research, hard work, and a bit of luck, you too can find gold nuggets! 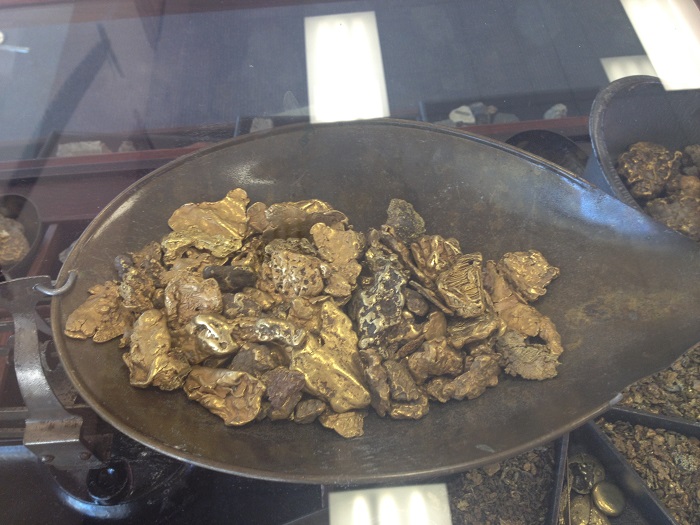