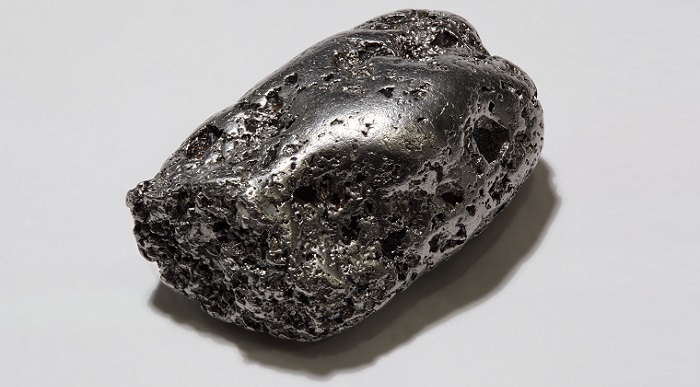 Platinum nuggets are actually MUCH rarer than placer gold nuggets are. Nearly all of the platinum found around the world is microscopic bits that are extracted from the ores, and not large enough to be captured by traditional placer mining methods.

The largest source of platinum is South Africa. Recently a mine in the state of Montana has come into production. Other commercial operations are located in Russia and Canada.

In a very few areas, platinum actually forms in larger pieces, and when introduced to a stream or river, it will form a nugget just like gold will.

This is such an uncommon occurrence that only a handful of mining districts are actively being worked for platinum nugget deposits.

The Ural Mountains are the largest producer of placer platinum nuggets in the world. Platinum is recovered from the gravels of creeks and rivers throughout the region. Located in western Russia near the border with Europe, the Urals are an exceptionally rich mountain range that also produces countless other metals and minerals.

The early miners were looking for gold in British Columbia, and they simply tossed aside the “worthless” white metal that they were finding at the bottom of their gold pans.

Eventually when it was realized that this metal was platinum, there was a renewed interest to the area. Considerable platinum has been found in this mining district, and some nice nugget are found.

There is a fun treasure story associated with the platinum discoveries in B.C. There is a treasure tale of a fellow by the name of Swede Johansson that found a rich pocket of platinum in the Tulameen district. He collected 25-pounds of platinum in a bucket, and hid it in the bushes nearby. He lost the bucket, and it still remains hidden somewhere in the bush.

The Kondyor Mastiff intrusion located in far eastern Russia is a geological phenomenon. This area is home to a massive platinum mine, one of the largest in Russia. Several tons are mined here annually.

Both gold and platinum are mined here. In fact, there are some fascinating gold-plated platinum crystals that are found here, the only place on earth where this occurs in this way!

Many of the specimens found in this region have crystalline structure. They are absolutely fascinating, and mineral dealers and collectors from around the world can immediately identify a platinum specimen from the Kondyor Mastiff region.

In northern California, you can find one of the few areas in the United States where platinum can be found in nugget form. Historical documents indicate that placer nuggets have been discovered in Trinity, Siskiyou, and Shasta Counties.

One specific area that was especially rich was around Junction City. There have been big nuggets of several ounces in size that have been recovered here.

Like many other places, the early miners did not identify the platinum they were finding as valuable. They tossed it aside as some worthless metal. When it was finally realized, the total production for here was still relatively small, estimated at around 200-300 ounces per year.

There are a handful of other areas where coarse platinum can be found. It is almost always found by prospectors who are looking for gold.

Also Read: Where to Find Gold in all 50 States

There is an interesting thing about platinum nuggets. Although they are exceptionally rare, and undoubtedly rarer than gold nuggets, they still don’t attract the same interest from collectors.

Certainly there are rare mineral collectors who appreciate the rarity of platinum and appreciate the collectability of these valuable specimens. Yet, platinum has never had the same allure that gold has.

Most of the ancient civilizations that valued gold for its beautiful characteristics never used platinum. Coinage throughout the world used gold and silver.

And this says something about the way people value things. It is not always based purely on rarity. Think about it… there is less ‘moon dust’ on earth than gold or platinum, but would you pay $1000 an ounce for it? In the end, each person makes up their own mind about the true “value” of something.

Gold nuggets will always by valued by collectors. So will platinum nuggets, but I don’t think they will ever have quite the allure that gold does.

Next: The Biggest Gold Nugget Ever Found – Nearly 200 Pounds!