Gold can be found all throughout the U.S., and the state of Washington is no exception, although it gets much less attention than most other locations. One reason for this is the overall lack of any sizable gold nuggets in most of the state. Most of the gold in the state is only found as very fine dust and flakes, although there are exceptions which will be discussed below.

Natural gold occurrences can be found in many of the creeks and rivers within the Cascade Mountain Range in western Washington. Other known gold bearing areas are found in eastern Washington near the border of British Columbia.

There are numerous areas in this part of the state that have gold, but much of the gold produced here comes from large commercial mines, and the gold is very small and locked up within hardrock deposits, which are not economically viable for most miners. Often this gold is so small that is invisible to the naked eye, not large chunky gold nuggets or even small gold dust.

There is a very active mining community in Washington, and some miners are very successful searching for gold here. Although the vast majority of placer gold is relatively fine textured here, there are nice sized nuggets found on occasion.

The Crystalline Gold Specimens of Liberty

The thing that really sets the Liberty area apart, aside from its overall richness, is the occurrence of some spectacularly beautiful specimen gold that can be recovered here. Much of these specimens are classified as wire gold specimens because of their fine, intricate shapes and wire-like structure.

While wire gold specimens can be found in goldfields all throughout the world, what makes Liberty so interesting is the sheer number of them that have been found. They are not just random pieces that are found from time to time; in some locations they make up a very large portion of the gold that is found.

These wire specimens are exceptionally beautiful, and mineral collectors are happy to pay handsomely for them. They have intricate shapes, and experience gold collectors can identify Liberty gold specimens because they are so unique.

The Richest Gold Locations around Liberty

Another interesting thing about the Liberty Gold District in Washington is the limited overall size of the area where gold is mined. Although gold nugget producing districts throughout the West all vary in size, the area around Liberty where gold occurs in any decent quantities is fairly limited. Most of the gold is found concentrated down it the valley bottoms, which have been mined hard since the first discoveries here in the late 1800s.

Most of the early placer mining operations here occurred on Swauk Creek and Williams Creek. Placer gold can be found up the headwaters of Williams Creek for a good distance, and gold occurs from the confluence with Swauk Creek up the summit of Blewett Pass.

Baker Creek, Boulder Creek, and Negro Creek also contain some gold occurrences on a lesser scale. Scattered prospects are found in the mountains that surround the creeks that feed it, but the vast majority of the mining activity that occurred here was by placer mining methods right down in the creek bottoms.

This is the best area in Washington to find large gold nuggets. While most of the state is known mainly for its fine gold, the Liberty area has produced some fantastic gold nuggets and specimens over the past 150 years. Nuggets weighing several pounds have been found here.

One amazing discovery was made as recently as 2013. A group of miners working the Liberty Gold Mine found two nuggets using a Minelab metal detector

that both weighed over 1 pound! These were both well-worn placer gold nuggets that were mined from an ancient river channel above the present waterline.

I spoke with the finders of these amazing nuggets, and in addition to these two whoppers, there have been many “smaller” nuggets of impressive size found also. These are some amazing discoveries that just go to show that there are still some huge gold nuggets buried and still waiting to be found! 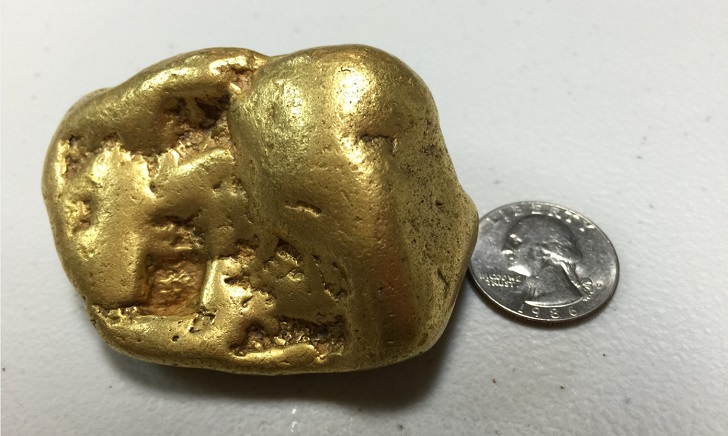 A huge gold nugget found recently in Washington. Big nuggets like this are exceptionally rare, but this town has actually produced quite a few of these over the past century.

Not only does the Liberty area produce some nice gold nuggets, but some of the wire gold specimens are also exceptionally large too. Their size ranges from small individual wires of gold up to huge masses of wires that weigh several ounces in size. One early reported discovery of a 22 ounce crystalline gold specimen was reported.

As with so much of the gold found back in those early days, it was most likely melted down for its gold value and no longer exists today. One of the best public gold displays open to the public can be found at the Rice Northwest Museum of Rocks and Mineral in Hillsboro, Oregon. They have a fantastic gold display that consists of many beautiful gold nuggets and specimens from Washington State.

Next: Gold Prospecting on the Olympic Peninsula