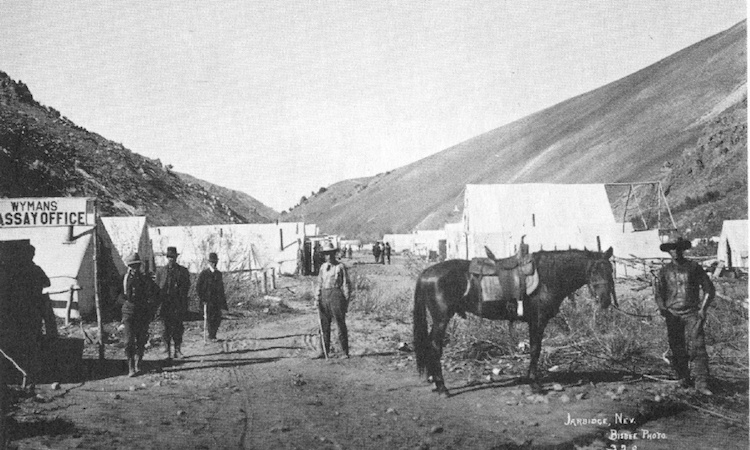 The countryside around the northeastern side of Nevada is truly wild, and many strange stories have originated here. Jarbidge was an old gold town located here and the tale of the Lost Sheepherder mine is perhaps the most famous of these legends in northern Nevada.

Many prospectors had been searching for gold in this town since 1870 but nothing very significant was found. In 1890, a prospector called Ross came to Jarbidge and decided to look for gold in the mountains till the winters set in.

During the end of summer Ross stumbled upon some pieces of gold float. He tried to find the origin of the gold but by then the weather had turned bad and it had started to snow. Ross marked the spot by leaving his digging implements there.

How the Sheepherder Mine Got its Name

On his way back to civilization, Ross met a sheepherder named Russ Ishman who was working for the rancher John Pence. Ross narrated his story of the gold find to Ishman and told him that he intended to come back to find the rest of the gold when the weather cleared in the spring. Next year Ishman returned to Jarbidge but did not come across Ross. He decided to go and look for the gold at the place Ross had described. It is said that Ishman found the gold float and the pick and shovel left behind by Ross.

Upon searching further, Ishman found a human skeleton which he believed to be that of Ross. It was a fact that Ross was never seen at Jarbidge again. Russ Ishman spent the entire summer to trace the source of the gold and finally found the ledge. However as winter had set in, Ishman collected all the ore he could, covered his tracks well and came down with his sheep to the ranch.

Ishman narrated his story to Pence and showed him the ore samples. Pence had these examined and they turned out to be having a rich concentration of gold. Both planned to develop the site and evacuate the gold when the winter ended.

As spring set in, both men rushed to the site. The mountain slopes were very steep and difficult to climb but they pushed themselves on in anticipation of the gold. However, Ishman was an aging man and the stress proved too much for him and he collapsed and passed away. Although he had explained the location to John Pence, the ledge with the gold could not be located and Pence named this as the Lost Sheepherder Mine. It is said that Pence returned to search for the gold with many prospectors year after year but the Lost Sheepherder Mine was never located.

In 1908, another discovery was made of very rich grade gold ore close to Jarbidge River. It was believed that finally the Lost Sheepherder Mine had been rediscovered. However when the ore sample was compared to the one brought down by Ishman, it was evident that the two did not belong to the same source.

Many such stories of finding the Lost Sheepherder Mine exist but none have proved to be true and the mine appears to be truly lost in the mountains of Jarbidge. This is large, remote country, and there could be lots of gold here waiting to be discovered.