Zimbabwe is one of the major gold producers in Africa. Located in southern African, Zimbabwe has some of the world’s most productive gold mines. Because of this, there are quite a number of international gold mining firms in the country. This has made Zimbabwe an important source of gold for many major mining companies across the globe.

With a decline in the country’s economy most of Zimbabwe’s gold deposits are yet to be explored. This means that are a lot of potential for investors in the gold mining sector in the country. Zimbabwe also has an excellent infrastructure that is made up of good roads, railways, and electricity generation to support the mining sector.

The government has recognized the importance gold mining to the growth of the country’s economy and in 2009, it relaxed the restrictions on foreign invests and thus setting the stage for further investment in the sector.

History of Mining in Zimbabwe

Gold mining in Zimbabwe can be traced back to the 13th century when the indigenous people extracted gold from hills around their kingdoms. The Spanish and Portuguese visitors in the 16th century bear testimony to this as they traded with the locals in gold.

With the coming of the colonial rule in 1880s, gold mining fell into the hands of white settlers. During the period of colonial rule, the white settlers stated quite a number of commercial gold mining initiatives but most of Zimbabwe’s gold deposits remained unexplored. After gaining its independence in 1980, the new government of Zimbabwe put up efforts to explore and mine gold through licensing gold exploring and mining firms.

Today gold is one of Zimbabwe’s leading exports.

Zimbabwe has several active gold mines producing several tons of gold each year. In addition, the government has licensed several foreign firms to explore for more gold deposits in several regions within the country. Some of the major gold mines in Zimbabwe include:

This mine was first established in 1890 when the British settlers got interested in gold mining and recorded its first commercially mined gold in 1909. The mine was acquired by the Zimbabwe Mining development corporation in 1984 and it is now managed by its subsidiary, Kimberworth Investments. The main gold mining method employed in this mine is the underhand stopping method. The mine process about 450 tons of ore each day. The government of Zimbabwe through the ZMDC has greatly invested in this mine and gets quite a sizeable return from its investment each year as the mine produce quite a good volume of gold each year.

And: Mining Gold in the Rivers in Madagascar

This mine too was opened in 1898 by the white settlers in Zimbabwe and then acquired by the Zimbabwe mining development corporation in 1984. The mining method used in this mine include the shrink stopping mining method and the underhand benching long hole open stopping method. With about 600 employees, the mine runs a multi shaft system and process about 450 tons of ore each day. 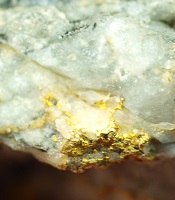 This is one of Zimbabwe’s biggest gold mine. The mine is located at about 15 km southwest of Gwanda city, which is the headquarters of Matabeleland South province and about 560 km from Zimbabwe’s capital, Harare.

The Blanket Gold mine is owned by Celedonia limited which bought the mine in 2006 from Kinross Gold Corporation. The mine goes to a depth of 750 meters below the earth surface and produces about 45,500 ounces of gold annually. The Celedonia expects production to continue to rise to about 80,000 ounces of gold by the year 2020.