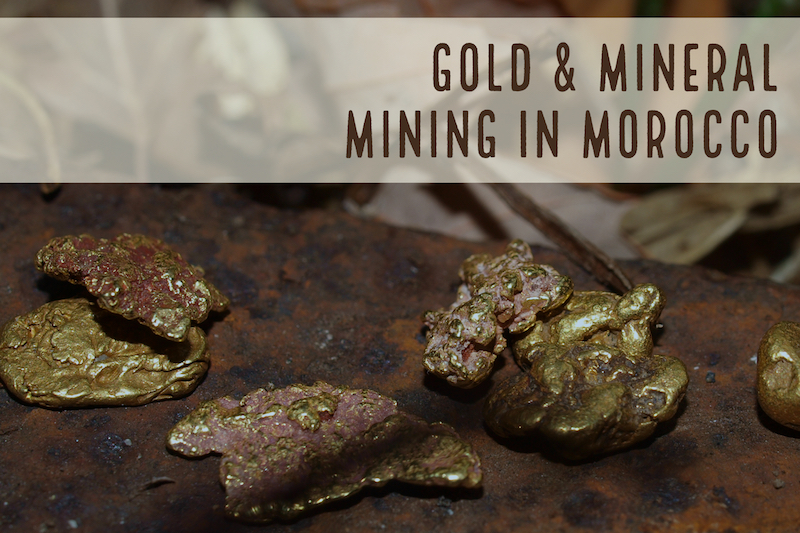 Morocco is one of the most stable Arab countries in African. In addition, the country has a robust mining sector despite the fact that gold mining may still remain a little bit underdeveloped.

Mining contributes about 6% of the country’s GDP with most of it being from the export of phosphate. Being the third largest phosphate producer in the world most of the mining activities in Morocco are centered on phosphate. However, it is important to note that gold has been discovered in many places throughout the country, and the artisanal miners estimated figures of gold mined each year is considerable.

Morocco, like most other countries involved in the ancient Trans-Saharan trade, has great history of gold mining. Most of the early miners learned the art from the Muslims in the neighboring Spain and the miners in the southern Asante Kotoko kingdom in West Africa.

In recent times, the government has been encouraging foreign investments in the sector so as to increase its gold output. The government has for the past decade been seeking out partnerships with foreign companies to help develop the country’s gold mining sector. This gives investors a great opportunity to get involved in the country’s gold sector.

Mining in Morocco is controlled by the ministry of Energy, mines, water, and environment, which issues both exploration and mining licenses and handle regulation issues. In addition the Office of Petroleum and Mines (formerly called Bureau de Recherches et de Participations Minières) is mandated to promote exploration and the mining of all mineral resources in the country with the exception of phosphate.

Gold, like all the other minerals found in morocco are the property of the government and you have to meet all the government requirements in order for you to be issued with either a license and permit to explore and mine gold in the country. You also have to adhere to the mining code which is enforced by the directorate of mines through executive orders.

Some of the major players in the country’s gold mining sector include:

This is the largest private mining operator in morocco. The group has interests in several sectors including gold, tin, phosphate and copper among others. the company operates through its subsidiary MANAGEM holding company which is made up of Compagnie de Tifnout Tighanimine (CTT), Compagnie Minière des Guemassa (CMG), Société Métallurgique d’Imiter (SMI), and (AGM) among others.

The company controls both the Akka Gold Mining and the Lourim Gold resources located about 280km from the Agadit. Working in conjunction with the Proparco a subsidiary of the French Development Agency the company is expected to produce about 100,000 troy ounces of gold per year from the Akka gold mine.

This is another important players in the country’s gold mining sector. This Canadian firm has been exploring for gold in Morocco for some time and owns the license to the Amizmiz gold project. The company made its first gold find in 2009 and has been working on the site with the aim of developing a commercial gold mine on the site.

This United Kingdom registered company was issued with two gold exploration licenses for the province of Tan Tan in southern Morocco in 2009. Working with the National Office for Mines and Hydrocarbons the company has been conducting exploration activities on the Ain Kerma project which is located at about 30 km northeast of Tan Tan within the Anti-Atlas Mountains.

So far the company has recorded some success some areas producing quartz with gold that grades anywhere between 0.1 g/t to 6.5 g/t gold.

The company has also commenced exploration activities at the Toufrite project, which shows that there is gold within a granitic stock. Further analysis shows that the gold grade here ranges from 0.2 g/t to 14 g/t gold.