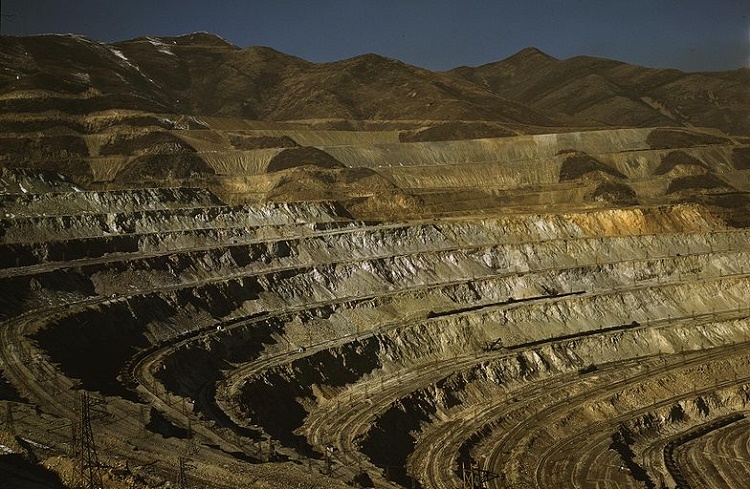 Open-pit mining which is sometimes referred to as open cut mining, opencast mining or simply strip mining is a mining technique that extracts important minerals from a borrow or an open pit.

There are two types of mining methods commonly used in large scale mineral mining; open pit mining and tunneling. Open pit mining is used when the minerals to be mined are located just close to the surface. This is especially when the soil or material covering the minerals are relatively thin and can easily be moved for the mining to take place.

Open-pit mines are usually operated until either the mineral asset in them is depleted or expanding the mines becomes uneconomical to sustain. At such a point when this happens, the depleted mines are in some cases changed over to landfills for disposal of wastes.

Some type of water control is generally required to keep the pits for the open pit mine from turning into a lake; this is especially important if the mine is located in a climate with considerable precipitation or if the geological makeup of the mine allows for underground water movement.

Extraction of the Mine

Open-cast mines are burrowed on benches, which depict vertical levels of the pit. These benches are usually excavated at between four and sixty-meter intervals. The size of the benches depends on the size of bulldozers used to make them.

Most of the open pits mines used to produce building materials (quarries) are usually shallow and thus don’t have benches. The walls of the pits are excavated at an angle to minimize the dangers associated with having vertical walls such as falling rocks. This is determined the nature of the rocks especially their weathering and structural weaknesses such as foliations, shears, and faults within the area.

Read: 8 Different Ways to Mine for Gold

The walls to the pits are usually stepped. The flat part of the wall steps is known as the berm or bench while the slanted segment of the walls is known as the batter. The creation of steps in the walls is meant to help prevent rocks falling. Sometimes rock bolts, shotcretes, and cable bolts are used to create additional support for the walls. De-watering drills might be used to help mitigate water weight by boring on a level plane into the walls, which might affect the strength of the walls.

Other than strong walls, open pit mines are made with a strong haul road which is generally built along the edge of the pit, in the form of a gradual slope up from the bottom of the pit on which trucks can drive up carrying both minerals and waste rocks. The waste rocks are heaped up on the surface, close to the edge of the open pit in what is commonly referred to as the waste dump. The waste dump is likewise layered and stepped, to slow down degradation.

The processed ore from an open pit mine is usually in a form of a slurry known as the tailings. This is pumped into a tailings dam or settling lake, where the water dissipates.

Tailings dams can be poisonous because of the presence of toxic materials such as unextracted sulfide minerals, several types of harmful minerals in the gangue, and most often cyanide which is utilized to treat gold ore using the heap leaching process. This poisonous materials can be harmful to the encompassing environment if not managed properly.

Rehabilitation of the Mine

When the mineral in the open pit is depleted, the mine need to undergo rehabilitation. Some of the time, abandoned open pits are used as dumping for solid waste. In the event that the mined ore contained sulfides it is secured with a layer of mud to be used avert access of rainwater and oxygen from the air, which can oxidize the sulfides to produce sulfuric acid. The mine is then covered with soils and vegetables planted over it to recover the natural look of the area.

Mine rehabilitation is an important step in the process of developing a mine, and most countries require a plan in place to to rehabilitate the land following a mining operation, although not all countries have the same requirements. 3rd world countries are generally much more relaxed about regulations than some of the major gold mining countries such as Canada, Australia, or the United States.