Serbia and Montenegro have fantastic mineral riches that go back to the Roman ages. Their major mineral resources include gold, zinc, coal, iron metal, oil and natural gas, silver, copper, chromite, pyrite, magnesium, limestone, and marble among others. All of these have been mined throughout history, particularly around the town of Bor, which was the biggest copper and gold mine in Europe for a long time. Archeological mining locations in the Bor zone are among the oldest in Europe as they were estimated around 4500 B.C

In spite of the fact that mining in the region was hampered by both the war, and, the UN sanctions of 1992-95, their economies have significantly recovered following the separation of the Federal Republic of Yugoslavia. Since 2000, Serbia and Montenegro governments have executed adjustment measures and aggressive reforms that sought to uplift their mining sectors.

A noteworthy policy approach is the change in the legal framework that governs mining. Updated laws on exploration and concession rights have been actualized or are currently awaiting last signing in both countries. These are important steps towards improving the countries gold production.

Mining in Serbia can be traced back to the Middle Ages when silver, gold and lead were mined by the rulers of the day. There are numerous mineral deposits and significant number of reported occurrences for gold all through the nation. Mining in the country is under the ministry of mining and energy which manages the issuances of both the mining and the exploration licenses. There is no active gold mine in the country at the present time although there are several exploration activities still on going. Gold panning is also quite popular along the rivers especially those found in the eastern parts of the country.

Some of the major gold projects in the country include Deli Jovan gold project located in Salas village within the Zajecar municipality in eastern part of Serbia about 20km from Bor. The project is owned and managed by Oragon Gold. The project is set on a block with great gold production history that dates back to the 18th century.

Gold production in Deli Jovan was last done during the Second World War and Oragano Gold has been working on the previously undrilled areas to see if there are more gold in the area. So far gold of grade 1.44g/t gold to 29.55g/t hove been recorded in the area.

Montenegro has a great mining history. However, there is no commercial gold mining at the present in the country. Most of the gold found in the country are on small scale and is mined by artisanal miners. There are also several places where gold panning is common with most of these done for fun or as part of the tourism activities in such areas. Other than gold the country boosts of several other minerals that helps boost its economy. With the return to stability, the growth in the mining sector is likely to see an increase in the gold discovery given the increased exploration activities in the country. 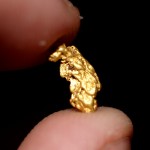 The mining division in Montenegro is represented by three well set up laws: the Law on Geological Exploration, the Law on Concessions and the Law on Mining. These laws have helped open up the country’s mining sector and thus helps increase the mining output. With such laws there are great opportunities for you if you are interested in investing in the country’s gold sector. With little discovery, and slow in uptake of the opportunities as a result of the ended Yugoslavian civil war, there are great chance for foreign investors to take part in growing the country’s mining sector.

Plus: Natural Gold Indicators (Part 1 of 3)