In 1862, the American Civil War was at its beginning stage when five men; Hugh Asbury, John Reel, Fletch Henderson, Bill Flanagan and Dick Johnson head out from South Carolina to the California Gold fields. They decided to camp near an area known today as the Cracker Creek, a tributary to the Powder River. While camping, the men decided to look out for some gold, panning the gravel along the creek.

Gold had already been made previously at the rich areas around Auburn just a few miles to the south, and more gold discoveries were being made throughout Oregon at that time.

The Beginning of Sumpter

Excited with their discovery of gold on Cracker Creek, the men decided to stop their travel and settle down in the area. It all started with building a small cabin between McCully and Cracker Creek which was named as Fort Sumter. The name was inspired from Fort Sumter, a sea fort famed for two major Civil War battles in South Carolina.

Eastern Oregon was an exciting place at the time, and gold discoveries surrounding Sumpter added more excitement to the area over the following years. Due to its remote location, Sumpter developed somewhat slowly in the next 30 years. It was difficult to get to Sumpter, since the only route to the outside world was 30 miles away; the wagon road winding across and through the hills to Baker County. However, that wagon road was set to become one of the early routes connecting all the booming towns in Baker County.

An Increase in Hard Rock Mining

During those times, when placer mining was prevailing, the placer miners discovered gold-bearing quartz ledges in the area and hard rock mining began in the Sumpter Valley and around its vicinity.

The first post office was established in 1874. However, the mining activities became more prevalent in 1895, when advancements in technology made extraction of gold much easier process. The invention of pneumatic drills, stamp mills for crushing ores and other methods that allowed gold to be chemically extracted from its alloys made it possible for Sumpter to grow as a town. Furthermore, the extension of track of the Sumpter Valley Railway in 1897 increased the growth of the town rapidly. In 1897, the population was about 300 and that was the beginning of the booming years of Sumpter.

By 1899, the Sumpter Valley Railway delivered six carloads of mining equipment every day and seven stage lines were running. Millions of dollars in gold were extracted from the mines and the town earned the nickname, ‘The Queen City’. The Queen city was the central hub connecting many of mining camps.

By 1900, almost nine million dollars in gold had been extracted from 35 of the mining camps in the area. By 1903, Sumpter was residence to around 4000 people. The town was bustling with 16 saloons, seven hotels, three newspaper, an opera house, two banks and a red light district. 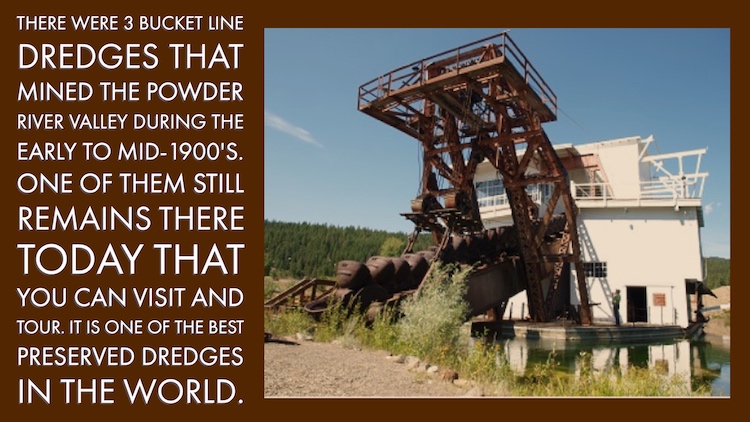 By 1913, Sumpter Valley was introduced to dredging, an excavation activity carried out that changed the landscape of the Powder River Valley that can still be seen today. Three dredges were active in the Sumpter Valley.

The first one installed in 1913, to mine the gravels of the Powder River. A second dredging, the largest of the three dredges also known as the Sumpter Valley Dredge came about to do some more extraction. These dredges operated non-stop and was said to be heard from miles. The dredging activities came to a stop in 1953.

The Sumpter Valley Dredge itself extracted $4.5 million in gold. It also churned up miles and miles of river bottom, and the large dredge tailings are still visible today.

In 1917, the Sumpter Valley became a site for a catastrophic fire which started in the cook’s quarter of the Capital Hotel. The fire quickly spread to the neighboring buildings and in a short amount of time almost everything including the streets was on fire. The fire destroyed nearly 100 buildings.

After the disaster, hard rock mining was declining and miners moved towards more prospective areas. The Sumpter Valley Railway began to decline in 1933 and the passenger service discontinued in 1937. The last run was in April 1947.

The Sumpter Valley was not exhausted of all its gold and some of it still resides on the bedrock. Today, it’s a quiet mountain town, popular with hunters and gold mining is still a popular activity on a smaller scale in the surrounding mountains. It’s a historical tourist attraction area with evidence of the booming years.

Popular attractions in Sumpter include the very well-preserved dredge that visitors can tour and learn how these massive pieces of mining equipment worked. You can also explore the small downtown section where there are still a handful of businesses that cater to visitors.