There have been many large nuggets found in Alaska. In fact, Alaska is probably the best state in the U.S. to look for gold, especially if you are looking for a BIG nugget.

Miners have been searching for gold in Alaska for over 100 years now, and there have been some amazing nuggets found. Of all the gold found in Alaska, the Alaska Centennial Nugget is the most impressive of all the finds here. 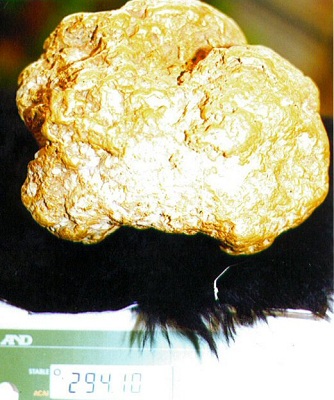 Found in 1998, this nugget surpassed the size of the previous record holder by over 100 troy ounces! Amazingly, it was found almost 100 years after the original gold rush to the Klondike that brought thousands of miners north to Alaska in search of gold.

This amazing find was made at the Swift Creek Mine near Ruby, Alaska. Although this mining district has produced many big nuggets over the years, the Alaska Centennial far surpassed any of the previous finds. It weighed an amazing 294.1 troy ounces.

It was found by a miner named Barry Clay. Barry is a very experienced miner who still spends his summers searching for big gold nuggets, as well as doing mining consulting and helping others miners set up their placer operations.

On the day that the Alaska Centennial Nugget was discovered, Barry was operating a bulldozer at the Swift Creek Mine. Little did he expect he was about to find the biggest nugget ever found in the state! When you think about how many men have searched for gold in Alaska since the early days of the gold rush, it is quite something to be able to say that you found the largest nugget ever found in the state!

This amazing nugget was not alone. It may be the biggest found here, but there have been several whoppers found around Ruby. Nearly all of the waters in this area have produced gold, including in Ruby Creek, Long Creek, Poorman Creek, Moose Creek, and Bear Gulch. These drainages have produced some of Alaska’s largest nuggets as well.

Ruby is the primary hub to the mines in this area. The town is located on the Yukon River, and it is the main source of supplies to the placer mines operating in this area. From 1910 to 1920, some of the richest placers in Alaska were being worked in the areas around Ruby. Today there are only a handful of commercial mining operations here, but it is very likely that nice nuggets are still being unearthed here.

There is no doubt that more some big nuggets are still hidden underground, waiting to be unearthed.

More Big Alaskan Nuggets Yet to Be Found?

The high price of gold has caused renewed interest in placer mining in recent years. With gold price currently well above $1000 per ounce, there are many miner that are out there searching for gold. Will they find Alaska’s next record breaking nugget? Only time will tell!

It is really amazing that the Alaska Centennial Nugget was found in 1998. With over a century of gold mining activity in Alaska, it is quite something to consider that it took 100 years of mining before it was unearthed.

Not all of Alaska produces large gold nuggets; many of the richest areas in the state only produce fine gold, and big nuggets are hard to come by. The Ruby mining district is one area that still may have some big nugget waiting to be unearthed. In fact, the next record breaking nugget from Alaska may very well be found near Ruby, Alaska.