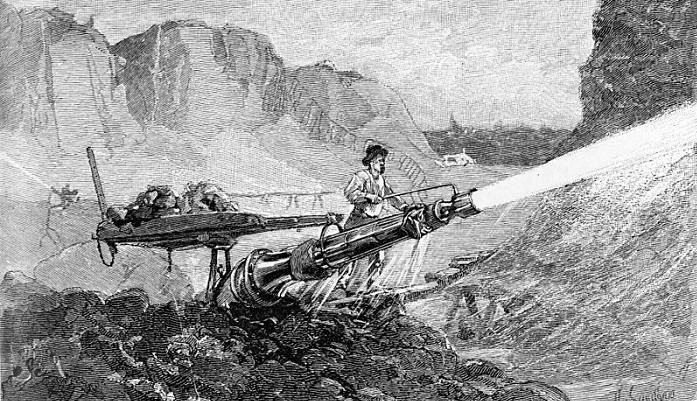 Men have been extracting metals from the Earth for millennia, using just about any method imaginable to get to the valuable ores that they seek. Early methods were crude and inefficient, but with enough brute force massive amounts of gold and precious metals were uncovered.

The ancient Romans introduced the notion of large-scale mining with a technique known as hydraulic mining that became one of the most important gold recovery methods ever discovered in history.

This method developed in 25 AD, required huge tanks of water and aqueducts to supply the water to the tanks. When these tanks were opened, huge waves of water washed away or broke the rocks, exposing the bedrock and any gold material. The rocks containing the gold would then undergo the ‘fire-setting’ method and was further aided by streams of water from the tanks.

In simple terms, hydraulic mining is where water is delivered through a nozzle at high pressure against the gravel deposits. These deposits or slurries were then passed on to large sluice boxes, thereby separating all the gold from the deposits.

This mining methods has been used around the world, with the most famous uses of hydraulic mining taking place during the California Gold Rush. 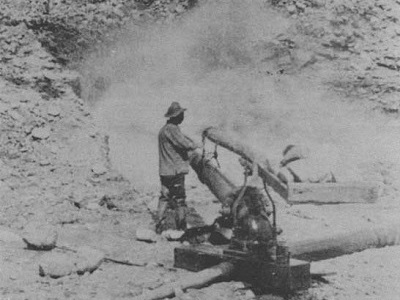 The technique was first used in California by Edward Matteson in 1853, where water was supplied through a hose to a nozzle made out of wood. However, due to the increase of prospectors and demands, people advanced the technique further, where the hoses became larger and was made out of metal and the water was passed through giant iron nozzles, known as monitors. Due to the invention of monitors, the diameter of the nozzle increased greatly, becoming capable to discharge large amounts of water under very high pressures.

It is reported by historian Hubert Howe Bancroft, that an 8-inch monitor could deliver 185,000 cubic feet of water with a velocity of 150 ft per second. Hydraulic mining proved to be an effective method, even for the ancient river channel deposits buried deep in the earth.

Although, hydraulic mining was a great technique to generate millions of dollars, it came with a huge cost i.e. the environmental effects. Massive amounts of slurries and debris were dumped onto the nearby rivers and streams causing flooding and erosion problems to ensue. The slurries dumped onto the river affected the food chain of aquatic animals. The slurries may have contained mercury (often mercury was added to the sluice due to its ability to capture small particles of gold), which would then enter the river.

In California, massive amounts of debris was pushed down from the goldfields of the Sierra Nevada through the many rivers that eventually would settle within the Sacramento Valley. Once the rivers reached the flat valley, the water slowed down as the rivers broadened. The sediments were deposited to the floodplains, where the river beds caused them to build up, eventually overflowing the banks and causing flooding.

It was reported that about 211 million cubic yards of residue were deposited in Yuba, American and Bear rivers alone. Hydraulic mining even had a devastating effect on riverside farmlands, where the fertile lands were covered by silts washed down by the river. Farmers legally challenged and also due to the water issues, hydraulic mining was eventually banned in 1884.

In California gold rush alone, it would be nearly impossible to get an accurate estimate of the amount of gold that was recovered from the countless hydraulic mining operations throughout the state. Mountains of sediment were literally washed away to gain access to the gold deposits within them. Although hydraulic mining was notoriously inefficient in the recovery of gold, the sheer volume of gold-bearing material that was washed by this method indicates it was one of the major producers of gold during the California Gold Rush.

In the United States, it certainly wasn’t just in California where hydraulic mining took place. You can find evidence of past hydraulic mining in nearly all of the western states of the US, particularly those that would have ample water supply.

You can still find gold at the old hydraulic pits. Try to look at the area and identify where the miners may have set up their sluice boxes and search around that area. It is estimated that as much as 50% of the gold that went through those old sluices was lost, so the gravel below might still be very rich. Depending on the coarseness of the gold, a good metal detector can also work very well to hunt in old hydraulic pits.