Pinpointers have been used for many years as an accessory that many detectorists have used. Their purpose is not to be used as a primary detector for searching, but rather to help speed up the recovery process of a target once it has been recovered.

The primary use of most pinpointers is for use by coin and relic hunters. The reason for this is because most of these targets are relatively large sized pieces of metal, and the small handheld pinpointers do a fine job of detecting those larger targets from several inches away.

Most gold detectorists rarely seemed to use them. While they would theoretically be quite useful in speeding up the recovery of a gold nugget also, the early model pinpointers struggled in the goldfields. This was primarily because most pieces of gold are relatively small, and they also had a tough time dealing with the iron-rich soils that gold nuggets are generally found in.

In recent years however, there have been several handheld pinpointers that have come onto the market that have proven themselves quite capable of working in the goldfields, and today many prospectors use one as an aid in speedy target recovery.

First, let’s take a look at some of the most popular pinpointers used by gold prospectors. Then we will talk a bit about their proper use.

The Most Popular Pinpointers

This pinpointer, affectionately named the “Garrett Carrot” by some, is probably the most popular pinpointer on the market right now for nugget hunters. It has exceptional battery life, come with audio or vibration mode, and is capable of detecting a nice nugget at several inches. It is fully waterproof up to 10 feet and its bright orange color keeps you from leaving it behind after you’ve dug a target.

Minelab is well-known for producing some of the best gold detectors on the market, so it is no surprise that they also make a pinpointer capable of use in the goldfields. Their Pro-Find 25 also has an audio and vibration setting and similar battery life to most other pinpointers. It is only water-resistant rather than fully waterproof like the Garrett, which may be important depending on the style of gold prospecting that you do.

Nokta is a Turkish company that has started to make some excellent metal detectors in recent years. Their pinpointer is well-constructed with a waterproof rating of up to 1-meter depth for up to 30 minutes, more than enough for the average gold prospector. Similar to other comparable pinpointers mentioned, it has good battery life, an audio and vibration setting, and generally good sensitivity even to small targets.

Another option for pinpointing gold nuggets is the Whites Bullseye TRX. This pinpointer is has generally the same features as the Garrett, Minelab, and Nokta pinpointers mentioned above. It is waterproof to 10 feet, so it is another good option if you are doing and metal detecting around water, or just using it in the rain.

Using a Pinpointer for Target Recovery

Before we talk about which of these pinpointers you should buy, I thought it might be worthwhile to talk about how to properly dig a target, primarily a gold nugget out in the field.

The beauty of having a pinpointer on hand when you are nugget hunting comes during a few different scenarios. One that comes to mind is the times when the ground is extremely hard and compact. Every inch you dig is painful and hard-earned. In situations like this, a pinpointer can be invaluable in telling you exactly where the nugget is in the ground, so you don’t have to dig any more material than you absolutely need to.

Along the same lines is when you are hunting with a metal detector that has a very large coil. It can sometimes be challenging to pinpoint using a large coil, and you may find that you are digging ridiculously large holes to unearth targets, much larger than you actually need to. This is another time when a handheld pinpointer can come in handy.

Another challenging situation can be when a nugget is wedged down into the bedrock. Swinging your detectors coil over the crack tells you that there’s gold in there somewhere, but it can be tough to tell exactly where, and you can’t fit your coil down in the crack. These handheld pinpointers will fit into the tight spaces and help locate those hidden nuggets.

Do you Really Need a Pinpointer?

The situations above show that there are occasions when a good handheld pinpointer can be quite beneficial in speeding up the recovery of a gold nugget. However, I will be the first to tell you that many skilled prospectors don’t use one at all. They are able to pinpoint just fine using their metal detector and see no need for a separate pinpointer.

There are times when I don’t use one also. Particularly if I am using a metal detector that has a small elliptical coil, I find that I can pinpoint just as quickly without one. I simply use the edge of the coil to indicate where the target is, then I slowly scoop material over the coil until I hear the sound of the target. Now this method does take some time to master, but for me it is just as quick as a handheld pinpointer.

However, when I have a large coil on my detector, I have learned to really love my handheld pinpointer. For me, there is no doubt that it speeds up the recovery of targets, and that means that I will find more targets in a day of detecting and increase my odds of finding gold. 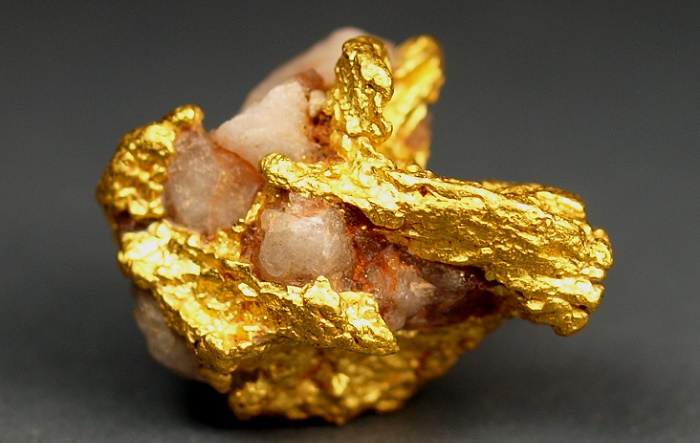 A spectacular gold in quartz specimen found using a metal detector and handheld pinpointer. One nice piece of gold like this can buy a lot of mining equipment.

These are kind of expensive? Can’t I get a cheaper One?

It is true, for such a small little device, all of these pinpointers are pretty spendy. And if you do much looking around you can find other pinpointers that LOOK similar to these that cost much less.

Now it’s fair to say that I haven’t used them all, but I do know that when it comes to gold hunting, cheap equipment is almost never the way to go. The 4 different models mentioned above are listed in this article because I know for a fact that they are commonly used in the gold detecting community. They have been tested by some of the best gold prospectors out there and have proven to be very capable in the goldfields. I can’t say that for the cheaper models.

Much like metal detectors, it is often the case that the cheaper varieties will do alright for coin hunting in the park, but the conditions in gold country provide a special set of challenges.

My recommendation would be to get a good one, or don’t get one at all. Cheap equipment is usually a waste of money, particularly when we are talking about gold detecting.

Which Handheld Pinpointer is Best for Gold Nuggets?

Now since you have read all this you probably just want to shut up and tell you my favorite one, don’t you?

Well, to be perfectly honest I think all of them will get the job done. Their task is pretty simple really. Identify a metal target with consistency when one is near the tip of the pinpointer without producing false signals.

Spend some time reading reviews on these 4 models mentioned above and you will find that for the most part people are quite happy with all of them.

I personally own the Garrett Pro-Pointer

and have found it to work great for me and it does everything I need it to. All the other gold prospectors I know who own one are pretty happy with it as well.

If you are serious about metal detecting for gold nuggets, or really any type of metal detecting for that matter, I think it is well worth the extra investment to carry one of these quality handheld pinpointers to speed up your target recovery and ultimately increase the amount of gold and treasure that you bring home with you.