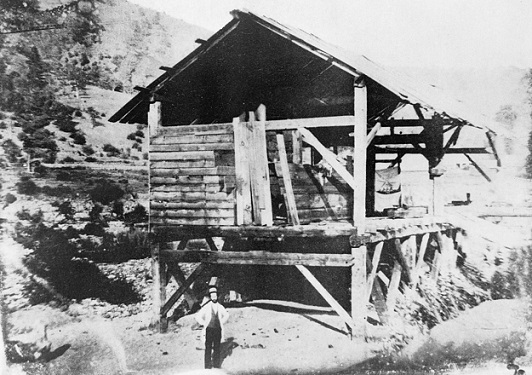 Sutter’s Mill at Coloma, the location that started it all!

Like several other rivers passing across the Mother Lode, the American River is divided into three main forks; the South Fork, the Middle Fork and the North Fork. Gold has been found in all the forks and in streams feeding the river. This has been attributed to the fact that the river originates from the gold rich Sierra Nevada Mountains and rich veins are all throughout the mountains here, feeding the many creeks that flow into the American River.

There are thousands of miles of waters that contain gold in the American River basin. In addition there are several lode gold deposits and dry gulches along the river valley that has shown great potential for gold.

Even though the richest placer deposits on the American River have long ago been exhausted, there are a lot of places where you can carry out recreational gold panning along the river and still recover good amounts of gold.

The entire river system was loaded with placer gold when the early miners arrived in 1849. A few particularly noteworthy locations include:

This was one of the richest Bar on the American River. It was established in 1849 as the first gold mining camp above point of confluence between the South and the North Forks of the river. The center was active not just for gold mining but also as an important trade center for all the surrounding gold mines to supply all the miners working in the area. The original site of the Beal’s Bar now sits under Folsom Lake. 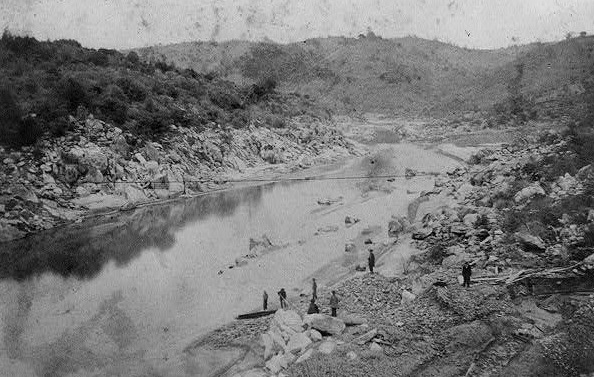 Early miners working the gravels along Rattlesnake Bar on the American River.

This was an important gold mining town that was complete with hotels, blacksmith shop, school house and a butcher during its heyday. Rattlesnake bar is located on the North Fork of the River at about 7 miles below Auburn. The settlement was established in 1849 following the arrival of miners on the American river. The center flourished foe several years before miners moved on and now it is just a small village with a rich mining history.

This was the site of the first gold discovery in California. With the spread of the news of gold discovery at the mill many miners streamed in and this lead to the creation of a town at the mill. Soon the town became an important commercial center with permanent structures that housed shops, saloons, gambling halls and other businesses. The growth of a metropolis made Sutter’s Mill become the principle gold town in the region. Soon the town changed its name to Coloma, in reference to the native Indian name for the area where Marshall first discovered gold on the American river.

Other gold major gold mines on the American river includes: Horse Bar which was not only an important gold mining but a large trading center with saloons, hotels, dry goods store and gambling houses; Carlton Bar which was a high hydraulic mining bar; Doton’s Bar which was one of the riches bars on the river; Kehoe Bar which was a deep gorge on the river with a suspended flume; Willow Bar and Patrick’s Bar; and Poverty Bar which is now covered by the Birdsall Reservoir on the North Fork of the river. 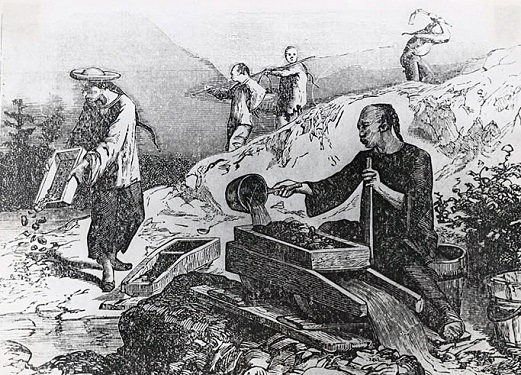 An early drawing of Chinese immigrants using a rocker box to mine for gold along the American River, California.

Today there are several places along the American River where you can prospect for gold. In fact the river gets thousands of visitors each year trying their luck with gold panning. If you are planning do some gold prospecting on the river then here are a couple places to consider:

This is a park where you can mine gold on the American River. It is 40 miles long stretching from Colfax to Auburn and covers both the North Fork and the Middle Fork of the American river. The recreation facility is a public property managed by the California State parks administers.

The site of the recreational area was once a rich gold mining center teaming with miners from different parts of the world. Today it is an important recreation facility that offer a wide variety of activities to the over 900,000 visitors it receives yearly. You can pan for gold along the river and on the river banks at the recreation area. In addition you may enjoy hiking, boating, hunting, mountain biking and fishing.

This is another great place that you can enjoy gold prospecting as you discover the great history of early gold rush in California. The state park covers parts of the historic town of Coloma where gold was first discovered in California.

The park was established in 1942 and sits on a 576 acre of land. Visiting the park allows you to see the site where gold was first discovered in California in 1848.

In addition you can drive to the hill where the monument of James Marshall the man who first discovered gold in California stands. With your panning equipment you are allowed to pan gold on the waters of the American river. In addition you get a chance to enjoy local world life and visit the Gold Discovery Museum to learn about gold mining on the site in 1850s.

And: These 3 HUGE Gold Nuggets Were Found in California