The history of placer mining on the great Mokelumne River can be traced back to the early years of the gold rush. A number of mining camps sprung up along the river. Some of the major mining camps during the gold rush era include Winters Bar, James Bar, Lancha Palana, Oregon Bar and Middle Bar. 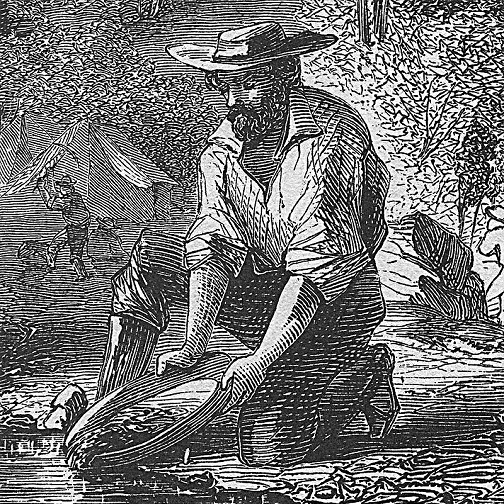 Gold was first discovered on the river in 1849 near the Penn Mine area by a group of Mexican miners. Soon the river was full of miners and gold was discovered in several other places along the river.

During the winter the miners moved to the hills and gulches along the river and it was soon discovered that these places were rich placer grounds. Soon canals and ditches were built to carry water from the river to the hilly gold deposits hydraulic pits were also developed to help in the mining process. This hillside mining left huge gravel and quartz wastes that still contain gold nuggets that most modern day gold hunters can find.

Some of the major mining towns during the early days of gold mining on the Mokelumne River include:

This was an important commercial center that served several mining sites along the river. The township which started in 1850 was surrounded by a number of gold mines including Cosgrove Creek, Salt Gulch and Minter’s Gulch. The town had many commercial activities including saloons, stores, churches, gambling halls, hotels and even a bank. However, by 1960 most of the richest placer gold mining diggings were exhausted and the town begun to decline, as miners moved to new places.

A number of Chinese and Mexican miners remained in the area in 1860s reworking the diggings left behind by the white miners into 1890s and this helped sustain the town once the huge immigration took place. In addition, two Mexicans accidentally discovered copper in the area thus creating a new rush to the area due to the value of copper during the Civil War.

Some of the major copper claims near Campo Seco include Lancha Palana, Star Gulch, Lettle Satellite, Hecla and constellation. The majority of these mining operations were shut down in 1867 when the civil war ended although quite a number continued into 1900s.

This was a small settlement west of Lancha Plana along the Mokelumne River. It was established in 1849 when gold was discovered in the nearby Poverty Bar, Sand Hill and Cat Camp. By 1850 the town had about 1,500 people. The town boosted of special amenities such as stores, saloons, post office and gambling halls. In 1860s when gold along the Mokelumne River reduced the town declined considerably. In 1960s when the Camanche Dam was built the town was inundated by the reservoir.

The Jackson mining town was established in 1848 and named in honor of Colonel Alden Jackson. It was an important transport and commercial center for miners in the neighboring towns along the Mokelumne River. It grew rapidly during the gold rush years and by 1850 it had a total of over 1500 inhabitants. With the decline in mining in the 1860s the town remained stable as it was an important transport hub.

This was an important mining camp established in 1848. The town was established on Sanora Bar, a site where Mexicans first found gold. It was known for hydraulic and dredge gold mining. Because a ferry crossing was located near by the town was renamed Lancha Plan which translates to Flat boat. The population of the town grew steadily and by 1858 it had reached over 1000.

This was one of the richest gold mining towns along the Mukelumne River. The town was established in 1848 and was one of the largest towns on the Mokelumne River with a population reaching 15,000 people on 1850s. With the closure of the gold mines neighboring it the town declined but there are still some residents there today.

Also Read: These 3 Huge Gold Nuggets Were Found in California

And: Gold Mining Locations on the Cosumnes River

And: The Rich Gold Mining Regions of California

Gold Mining on the River Today

There are still several places along the river where you can prospect and find gold. Some of the places you should check out if you want to go panning on the river are:

This is another great place to pan for gold on the Mokelumne River. It is located off Electra road near the historic Middle Bar Bridge above Highway 49. The place is great with scenic river features and mountains. Here you have a great chance of finding gold along the river in summer. In addition you can enjoy kayaking, rafting, swimming, bird watching and nature walks.