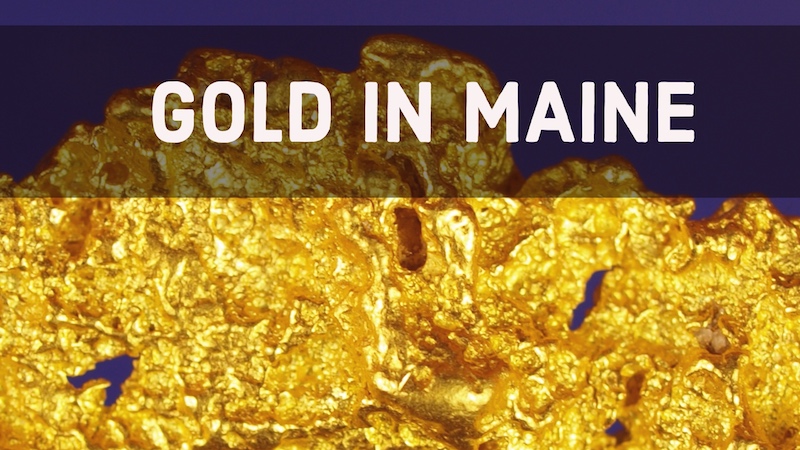 Gold has been found all throughout the state of Maine. Although it is mainly found in relatively small quantities when compared to many of the better known gold producing states in the west, there is still plenty of good gold yet to be discovered by prospectors willing to search for it.

A few limited lode deposits have been discovered throughout Maine, many of which produced gold as a byproduct to other types of mining, but the majority of gold will be found in placer deposits in streams and rivers.

It is worth noting that the vast majority of the gold found in Maine will be quite fine in texture, ranging from small “picker” sized flakes of gold all the way down to flour gold that is so tiny that it can be difficult to see with the naked eye.

Successful prospectors in Maine and other New England states are always careful to use skilled panning techniques, since it is very easy to lose these small specks of gold out of your gold pan if you are careless. In many instances, specialized equipment that is specifically designed to separate fine gold from black sands can be extremely beneficial.

While gold nuggets are rare in Maine, prospectors can find good sized nuggets if they search in the right places. 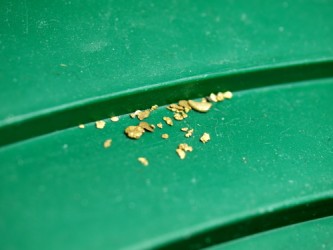 Gold can be found throughout the Swift River and many of its tributaries. Although most of the gold found here is very fine, the Swift River is one of the locations in Maine where you have a possibility of finding some nice flakes and maybe even a gold nugget or two.

There have been several large gold nuggets that have come out of the Swift River in the past, from the main river as well as the West and East Branches.

There is a popular gold panning area on the East Branch Swift River a short distance from the town of Byron. The land is owned by Boise Cascade Corporation, but panning is allowed with permission from the Timber Manager. All mining must be done below the water line to prevent disturbance to vegetated areas. To access the area, drive northeast from Coos Canyon on Byron Road to the East Branch Swift River.

The source of gold deposits in the East Branch Swift River are likely from small undiscovered veins of gold on Tumbledown Mountain that feed the placer deposits there. Explore the various small drainages that come off of that mountain. Fine gold particles can likely be found in the various drainages in this area in addition to the Swift River.

This is one of the more productive gold bearing locations in Maine, so this would be a good place to spend some time exploring. Hiking into areas that are off of the beaten path is always a good idea.

If you are new to gold prospecting, or would like to get some local knowledge on the Swift River area, check out Coos Canyon Rock and Gift in Byron. They offer free hands-on demonstrations on gold panning. They also have equipment available to rent for reasonable rates.

Another area worth checking out is just over the hills from Byron in the area surrounding the town of Weld and Webb Lake. There are several small drainages that are worth checking out including Tumbledown Brook, West Brook, and several other waterways around the area. A lot of this country will require some hiking to access the remote areas.

The Sandy River is a known producer of fine gold. The headwaters of the river start at the Sandy River Ponds and flow through the towns of Madrid, Phillips, Strong, Fairbanks, Farmington, and eventually drains into the Kennebec River. Gold can be found throughout the river and many of the small tributaries that feed into it. Chandler Mill Stream and Crossman Stream are two drainages that flow into Sandy River from the south just upstream of Madrid that will produce fine gold. Panning and sluicing can be very productive all throughout the area here, but care should be taken to use proper techniques to capture and retain the very fine gold particles that area present.

Gold can also be found in the South Branch Penobscot River in Somerset County. Its headwaters start at the western edge of Maine at the Quebec border and can be accessed off of State Route 6 just a few miles southeast of the border crossing. It continues to flows east through Canada Falls Lake and Seboomook Lake.

Nile Brook flows into Rangeley Lake south of the town of Rangeley. It drains into Greenvale Cove about 2 miles south of town. Although it is a relatively small drainage, a decent amount of placer gold has been found here over the years.

Kibby Stream flows from the Kibby Mountains in Franklin County, and also contains placer gold deposits. Its headwaters start near the Canadian border and flows into Spencer Stream near Felker Pond. Fine gold particles can be found all throughout Spencer Stream as well. Also explore the small side drainages and no-name tributaries and gulches in this area; all have a potential of containing some gold.

Just west of Kibby Stream is Gold Brook in the Chain of Ponds area. As the name would suggest, there has been some gold found in this area, and close observation may still show some evidence of historic placer workings in the area. Beaudry Road follows the brook from Lower Pond up to its headwaters. Gold can be found all throughout the drainage.

Another popular gold prospecting area is along State Route 16 the Cupsuptic River which begins at the Canadian border and flows into the Cupsuptic Lake(part of Mooselookmeguntic Lake) and then into the Androscoggin River. This area north of Rangeley is known to produce a fair amount of gold, and is a popular area for Maine prospectors.

There are fine gold deposits throughout the St. Croix River that defines the Maine/New Brunswick border. Most reports indicate that the gold found here is extremely fine flour gold, and difficult to accumulate any appreciable amounts. Of course as the saying goes, “gold is where you find it”, so you won’t know how much you can find until you get out there and start looking for it.

And: Gold Nuggets and Placer Deposits of Quebec

The laws regarding gold prospecting in Maine are managed by the State’s Department of Environmental Protection. The laws and regulations are constantly changing regarding the various prospecting methods that are allowed, so be sure to get updated information from the appropriate agency.

Also keep in mind that only 6% of Maine is public lands in various forms such as State Parks, National Forests, Wildlife Areas, etc. The vast majority is privately owned, often by large timber companies or smaller landowners. Always do your due-diligence to determine the laws and regulations for whatever area that you are prospecting.