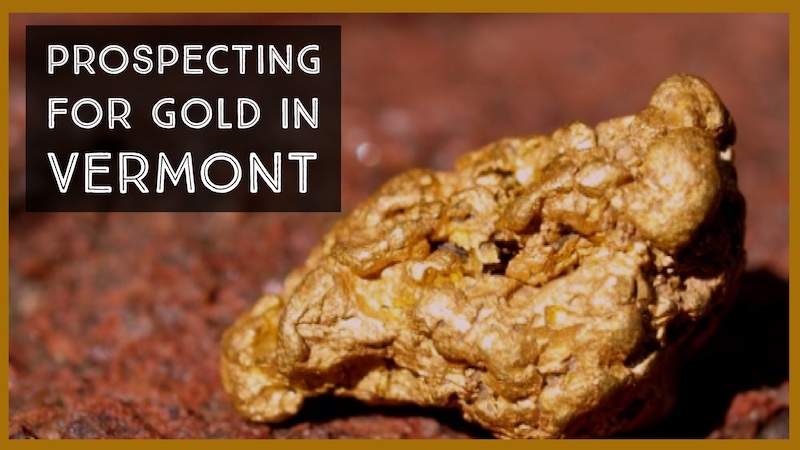 Gold deposits in Vermont are quite similar to New Hampshire and Maine, in that overall production of the metal has been relatively low.

The mini gold rush of Vermont began in the 1850s as people started noticing gold flakes in the rivers. Maps of the gold faults were created and mining activity soon began. For a good amount of time, Vermont had several gold mines extracting gold by sluicing and blasting. While there was certainly some initial excitement soon after the initial discovery of gold here However, once the initial excitement died out, it was identified that a large amount of Vermont’s gold storage was difficult to mine. The general consensus was that the gravels did not pay well enough to work profitably.

Of course this didn’t stop a few folks from trying, and several areas in Vermont have been prospected quite extensively over the years. By far, the most interesting area for a gold prospector is in the general areas around Plymouth and Bridgewater, where lode deposits have supplied gold to many of the nearby waters in the area.

An interesting fact about gold from this area is that it assays as some of the purest natural gold in the world, near 23.5 karats. This is higher than nearly all of the famous gold districts in the United States. Most gold nuggets assay in the range of 18k to 20k.

As with most of New England, gold nuggets are few and far between. The vast majority of gold is fine placer gold dust. Finding areas that have flakes and nuggets can be quite difficult, although there are prospectors who successfully find larger gold here. Research and hard work are necessary if you want to be successful as a prospector here.

A very popular place to search for gold is in the Ottauquechee River, and one of the richest places on the river is near the town of Bridgewater, although gold can be found all throughout the river. Buffalo Brook is also considered an excellent spot for both new and experienced prospectors. Apart from flakes and pickers, these areas have produced some sizeable gold nuggets over the years and still do for the patient prospector.

Broad Brook flows into the Ottauquechee River near Bridgewater, and is also an excellent place to look for gold. From its mouth to the area around Five Corners is a great place to find some gold. The original discovery of gold in this area caused quite a bit of excitement when the locals in the area first found it. This area is immensely popular with prospectors to this day as it has been known to produce quality gold nuggets regularly.

Like most gold occurrences in the Northeast, they soon found that the quantities of gold were quite limited and it paid better to farm the land around them than it was to prospect for gold in the brook. However, due to the gold lines in the mountains still existing, the river still carries flakes of gold and the Bridgewater area has become a hotspot for gold panning.

Of course not everyone moved on, and there have been plenty of attempts made to mine this area profitably. History suggests that although have certainly been many ounces of gold recovered from this area, the cost of recovery was never enough to justify large-scale mining operations.

The White River is a major tributary to the Connecticut River located in Central Vermont. The stretch along Highway 107 between Gaysville and Bethel is a known gold producer.

The creeks around Shady Rill are known to contain small amounts of placer gold. It is located just west of the Wrightsville Dam; check out Herrick Brook, Martins Brook, and Patterson Brook. This area is just a few miles north of Montpelier.

A few miles north of Wrightsville Dam is the small town of Worcester. If you take the road to the west out of town you will be following Minister Brook. Its headwaters start in the Putnam State Forest and flows southeast toward the town of Worcester. Fine gold can be found in this brook.

Rock River flows into the West River near the town of Williamsville. Gold can be found all throughout the river around Brookside, South Newfane, and Williamsville. While the river’s complete course through Vermont is in Windham County, the area between Dover and Newfane is considered to be the most productive. West River also has some gold in it. A popular camping area is found at Jamaica State Park in the town of Jamaica on the West River.

Gold can be found in many parts of the Black River, a major tributary to the Connecticut River in Windsor County. The area around the town of Ludlow is known to be productive.

The Mad River is known to contain very fine gold. The best known area to search is around the town of Warren, but there is likely to be fine gold deposits throughout the river system. Dig down to bedrock and use a good crevicing tool to scrape material out for panning.

Another tributary to Lake Champlain is the Missisquoi River. Anywhere around the towns of Lowell or Troy will produce gold.

Many of the waters around the town of Stowe contain gold. Gold Brook is appropriately named. The headwaters come off of Hogback Mountain and flow into the Little River just downstream of Stowe. Gold is also found in the Little River itself from the towns of Stowe down to its confluence with the Winooski River. 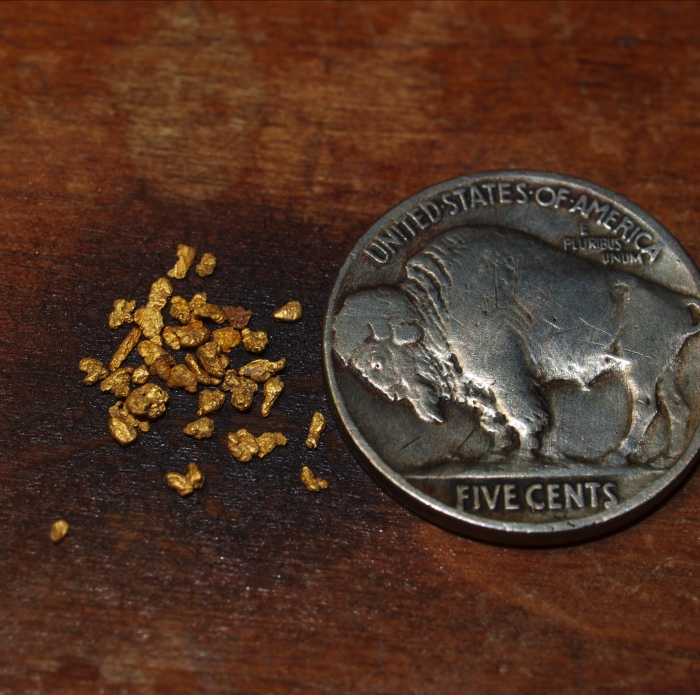 While panning and prospecting continued across Vermont at a smaller scale, the excitement of gold in Vermont was revisited once again in 2011 after Hurricane Irene. The storm exposed some of the hidden yellow goodness and the gold fever found a new leash of life.

With renewed interest and vigor, more people started to learn about prospecting and mining in the area. People weren’t getting rich, but they were noticing that the storm activity had refreshed the placer deposits in many of the gold-bearing rivers and streams.

Please keep in mind, most of the gold bearing areas in Vermont fall under private properties. While it might be possible to get permission for hand panning, you will need to check with the landowner. This can be a big challenge these days. Often it is a good idea to join local prospecting clubs which already have access to golden ground.

Even in the best of circumstances, running a profitable prospecting operation is going to be a challenge. This has not broken the spirits of hopeful prospectors to keep searching for Vermont gold. It is out there, are skilled prospectors are able to consistently find it!

Vermont has lots of good opportunities for gold prospectors throughout the state, but the regulations in place are a bit more restrictive than in neighboring states. Motorized equipment such as suction dredges and highbankers are not currently allowed in Vermont. Check with the Vermont Department of Environmental Conservation to get the most up to date regulations. 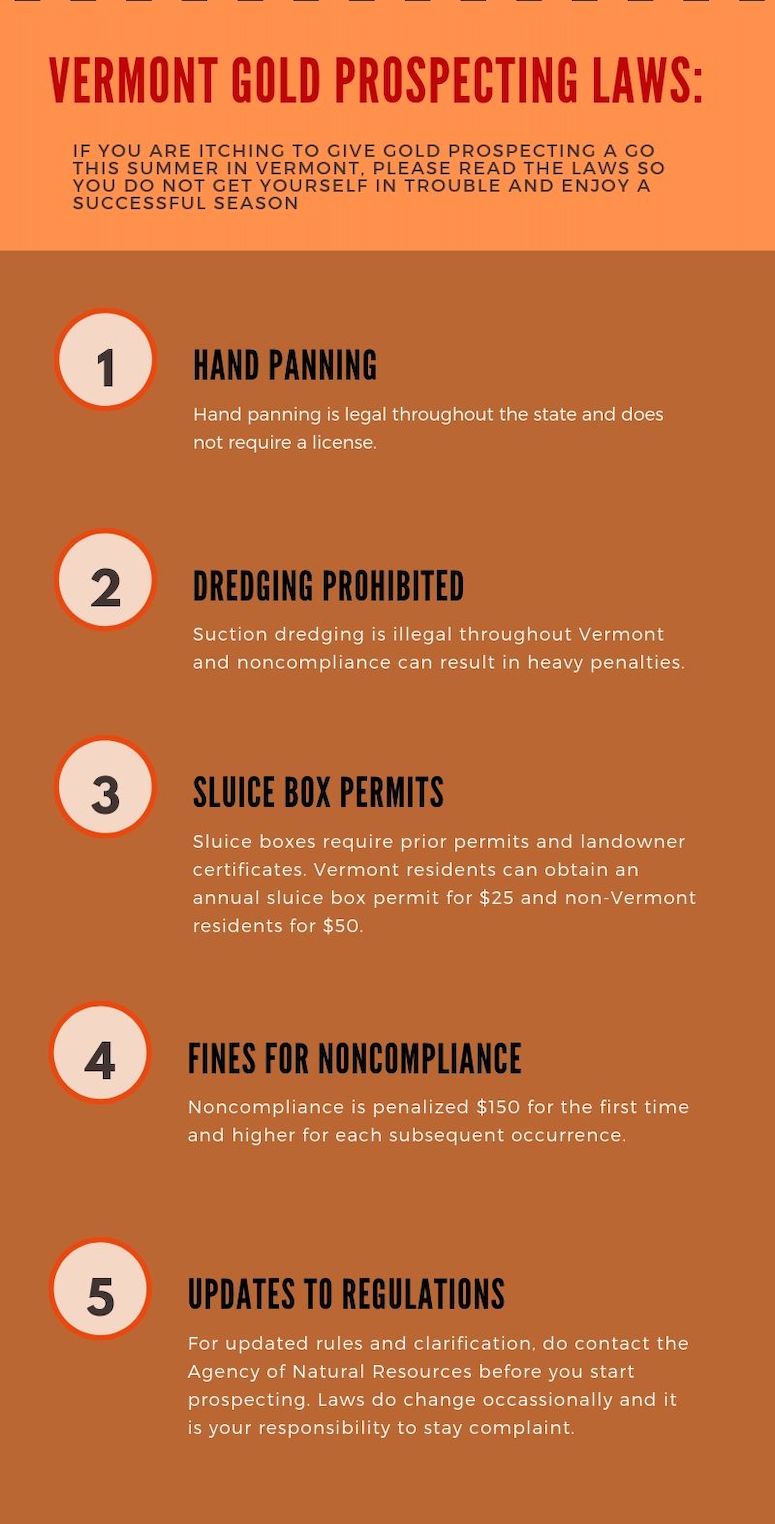 Next: 24 Gold Panning Locations in New England – Rivers with Gold