The X-Terra 705 is made by Minelab Technologies which is one of the renowned names in the industry of metal detectors. The X-Terra 705 like every other detector works on creating an electromagnetic field with metallic objects affecting a change in the field hence the picks up such a change and alerts the miner via the control panel.

The X-Terra 705 is a truly multi-purpose detector that is just as capable of finding gold nuggets in the desert as it is coins at the park. It is one of only a few detectors on the market that does a good job in a wide variety of terrains. 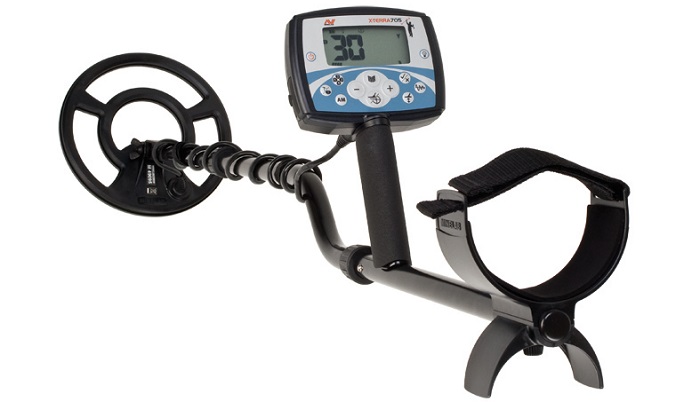 The features of the minelab X-Terra 705 metal detector are detailed below;

The Minelab X-Terra 705 metal detector has a slim but elegant appearance with a black varnish which makes it very appealing even to a very rigid critic. The control panel has a blue and silver background surrounding a screen which displays in a large monochromic transflective LCD screen. The LCD has a backlight which only functions in dim light enabling the detector conserve power in bright light and allows the user work efficiently and effectively in dim light. Its shaft comes in 3 detached parts which can be put together with just a little alignment. This is a well-built metal detector that a user can have confidence that it is rugged enough to handle the wear-and-tear of daily use.

The Minelab X-Terra 705 has a good ground balance feature which allows the user to modify the settings of the detector depending on the ground conditions. This is a very important feature that you won’t find on cheaper detectors, and it is an absolute necessity if you are going to use it for gold prospecting. Allowing the miner or gold prospector to choose the settings that fit the ground they are detecting. This feature makes detecting on mineralized soil and sand possible. One amazing thing about this feature is that it could be set to auto after adjusting so it will continually adjust along with the changing ground conditions.

For picking up the changes brought about by metallic objects buried in the ground the X-Terra 705 works within certain detecting modes. These modes are of two types namely the Prospecting mode and the coin and treasure mode. Both have their usefulness while the prospecting mode is used for detecting gold nuggets, relics but the coin and treasure mode is used for general purpose detecting. Each of the modes has more intricate specialization which aids the ease of detecting different metallic objects. 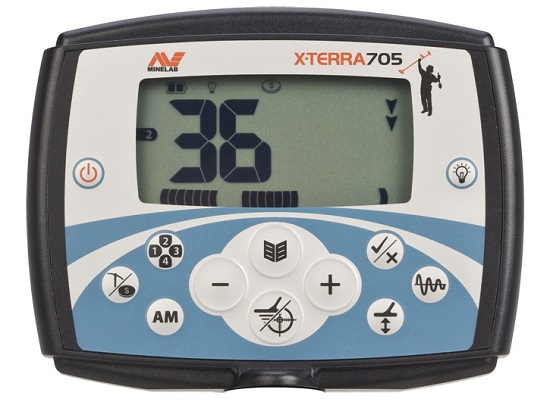 The Iron mask setting allows the detector to pick out the target objects such as coins, jewelry, or a gold nugget and others from an area in the ground in which lots of iron are present. The Iron mask settings work on an elongated discrimination scale called the ferrous discrimination scale. This scale can be adjusted wherever the user wants to set it. The higher the discrimination setting, the more targets will be rejected by the detector. It is possible to set a detector so that only gold nuggets are accepted while most ferrous junks are rejected, but it should be known that some quality gold nugget might also be rejected if the discrimination is set too high. For coin hunting in the park the discrimination is a valuable feature, but if you are in a good area for gold nuggets it may be best to turn it off so that you will hear and dig all targets. This will ensure that you don’t miss any nuggets.

The X–Terra 705 metal detector allows a wide range of choices to users who purchase the metal detector all thanks to the VFLEX Technology. The VFLEX allows the user alter the frequency of the detector by switching the coil. Even better is that all accessory coils made by Minelab can be used by the X-Terra 705. The coils come available in three frequencies namely; 3KHz, 7.5KHz, 18.75KHz. These coils, apart from coming in different frequencies also come in either the concentric type or the Double D type. The decision to use a particular coil over another is dependent on your detecting situation, though certain factors play a major role in coming to such a decision. One of the factors to consider by the user is the ground the user would be digging for gold and other treasures. If the ground to be detected is dense with magnetic minerals then the Double D coils would be the ideal choice for the user. If the treasures to be detected are large and very deep in the soil then larger coils should be the pick but for gold prospectors and miners the ideal choice would be a 10” Double D coil of about 18.75KHz which would cover the depth requirement for gold mining and also adapt perfectly to a highly mineralized soils found in gold country. The Double D coils use the ground balancing technique to adapt to highly mineralized earth. The search coils are not just water resistant but waterproof so that they can be immersed in water as deep as about 0.5m. Though the coil is waterproof, the control panel isn’t so avoiding fluid getting into the detector itself.

Interference by electrical equipment result in noise generation by metal detectors including the X-Terra 705. The sound heard by a user is often a popping or crackling sound, and this could be a disturbance to the user. The noise cancel feature of the minelab X-Terra 705 allows the user choose a noise cancel channel to reduce the noise generated by the detector due to interference. So no matter the presence of electrical installations or other detectors, changing the noise cancel channels reduces the interference generated. There are five channels available to cover for any interference irrespective of the source.

Versatility of the Minelab X-Terra 705

In conclusion, the Minelab X-Terra 705 is a versatile metal detector which can be used in nearly all situations from hunting coins at the park to gold nuggets at old gold mines. The X-Terra 705 is a fantastic tool of immense benefit to gold prospectors in particular when used with the 18.75 kHz 5 x 10” DD coil as it is specially designed for the goldfields.

I know several prospectors who use the X-Terra 705 as their primary metal detector when they are hunting in very trashy goldfields that need the use of iron discrimination to be hunting efficiently. And with just the flip of a switch, the same detector can be used to search for relics in old ghost towns.

Also Read: Nugget Hunting with the Garrett AT GOLD

And: The 4 Best Pinpointers to use for Gold Nuggets