A look at historic downtown Miami during the height of the copper boom.

Located in Central Arizona, the town of Miami was established at the end of an era of silver mining and was based off of the growth of the copper mining industry in the Pinal Mountains.

Miami is in Gila County at the foothills of the Pinal Mountains in Central Arizona, at an elevation of around 3,500 feet. Miami is not a big town by any means. According to the United States Census Bureau, the town has a total area of .9 square miles. However, despite its small size, the town has a rich history and culture.

The creek was known for its porphyry deposits, which essentially is a body of ore where the mineral copper is disseminated through the mass of the rock itself and not in concentrated veins or pockets. The Miami region was known to be rich in porphyry deposits, and companies, like the Miami Copper Company quickly began taking advantage of this opportunity.
For historical purposes, Miami was founded in 1907, but officially took off in 1908 with the help of a local businessman and entrepreneur, Cleve W. Van Dyke.

Miami has often been associated with neighboring town, Globe, as both areas were well-known for their copper industry. In fact, much of the area surrounding both towns is better known as Globe-Miami due to their close proximity.

The Miami Copper Company began working in the Miami area in 1906, and work quickly took off as demand increased. Prior to Miami’s founding, most of the miners resided in Globe, which is seven miles to the east of Miami. These workers could walk to and from work in the mines of Miami.

The majority of the miners traveled to work on foot due to lack of public transportation. Economic circumstances kept most from being to afford their old homes, thus resulting in a large need for housing. Very few miners could afford to keep their homes and were forced to travel on foot. Convent housing was needed as well as businesses for shopping and entertainment. 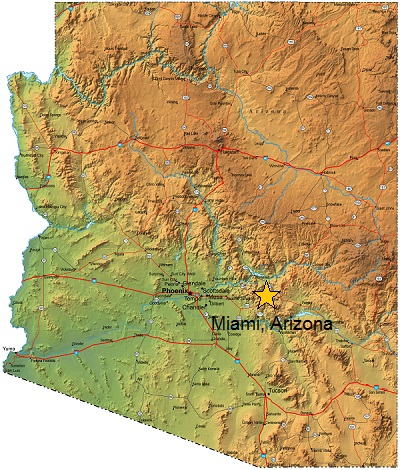 Miami, Arizona is located approximately 80 miles east of Phoenix and 125 miles north of Tucson in the Pinal Mountains.

Soon, the Miami Land and Improvement Company was founded, and the company quickly bought a tract of land where downtown Miami is today. Seeing the opportunity, Van Dyke purchased a tract of land in 1908 on the upper end of Miami Flats from the Miami Land and Improvement Company. He began to then accumulate adjacent tracts of land as well with plans of selling or renting land to local mine workers.

Van Dyke built the town based upon the idea of a “planned community.” He advertised through local print in efforts to bring more people to the down. He became known for his creative marketing for the town and even set a particular date to be known as the “Miami Townsite Day.”

The day was set for October 11, 1909. Van Dyke garnered the support of local real estate companies in Globe and organized several events to drum up enthusiasm for the townsite day. He anticipated a “land rush” that day as prospective land owners came to town to purchase one of the available lots for their home. Van Dyke and other real estate owners in the area were the owners of the land, but they were willing to sell the lots at reasonable prices. He was not disappointed with the turnout from the day as settlers traveled in droves to establish their families in search of a better life in the copper mining industry.

The Arrival of the Railway Increases Growth

The arrival of the train in 1909 assisted with the growth, and the town quickly grew after the townsite date. Along with the homes came local grocery stores, general stores, bakeries, hotels, restaurants and, of course the mainstay of most western towns, the local saloon. Despite the fact that the roads were not graded and utilities were not in existence in the area, the town’s growth continued.

According to the 1910 federal census, approximately 800 people were reported to be living in Miami at the start of 1910, and by years’ end there were approximately 1,390 residents living in the area.

Miami embodies your typical old western mining town, but it is far from being a ghost town. In fact, mining is still taking place in the area around Miami and Globe today, with considerable amounts of copper ore still being extracted from the surrounding hills.

Many of the older buildings and structures are still in place. The Bullion Plaza Museum in Miami talks a great deal about the cultural, mining and ranching history of the area. The downtown area has been renovated to revitalize the older appeal, but the essence and draw of the downtown remains the same.

Located a fairly short distance east of Phoenix and north of Tucson, the town of Miami is a wonderful old mining town to visit and enjoy a look at some of Arizona’s mining history.

Next: Metal Detecting and Drywashing in Arizona