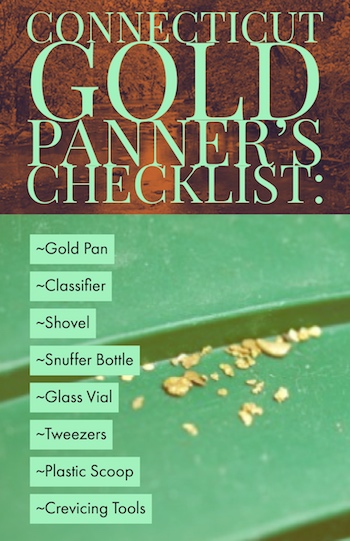 Connecticut has many areas that gold can be found. Like so many other states in this part of the country, gold is widespread and abundant, but rarely found in high enough concentrations to attract much interest.

Even with the recent high gold prices that we have been experiencing, there has been virtually no commercial interest in the gold deposits in Connecticut.

Where to Prospect in Connecticut

A known gold producer in Connecticut is Leadmine Brook, a tributary to the Naugatuck River just north of the town of Thomaston and above the Thomaston dam. The upper end of Leadmine Brook can be found in the area of Harwinton and along Birge Park Road and Hill Road. Gold can be found all throughout this brook by carefully panning the gravels.

Look for areas where fine gold would settle and concentrate. The gold that is found here is almost always very fine textured, so use careful gold panning techniques to ensure that you retain the gold in you pan.

One place that gold can be found near Harford, Connecticut is in the Farmington River to the north. It is a sizable tributary to the Connecticut River, and is also known to contain very fine deposits of placer gold.

Another known gold bearing area in Litchfield County is Spruce Brook. It is a very small tributary to the Naugatuck River, and caused some very short-lived excitement when gold was first discovered there.

Like so many of the gold deposits found in Connecticut and other states in this part of the country, the gold concentrations found in Spruce Brook have were never found to be economically viable on a commercial scale.

Nonetheless, a recreational prospector can definitely find some nice gold here. It can be located along the main road along the Naugatuck River just south of the town of Naugatuck, and the upper end intersects Hunters Mountain Road.

A fairly recent discovery of high-grade gold ore was found at the old cobalt mines located on Great Hill just north of the town of Cobalt near the Connecticut River. What was surprising about this gold deposit was that it was completely overlooked by earlier miners who were mining for cobalt. The gold bearing ores were discarded and remained that way for centuries.

This mine is located on private property, and is not being worked to our knowledge. However, it does raise questions about the possibly overlooked potential of this area for gold and other valuable mineral. It is quite possible that gold could be found in other lode deposits around this area, or in placer deposits in nearby waterways such as Mine Brook, Great Hill Pond Brook, Rattlesnake Brook, and many others in the vicinity.