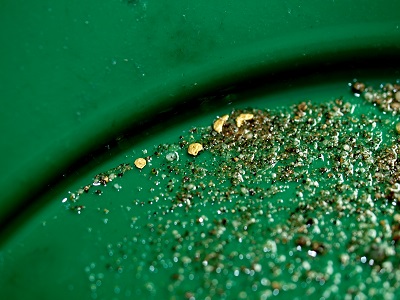 The geology found throughout New York is not consistent with most of New England and parts of Pennsylvania, in that there is very little likelihood of finding any gold sources that come from lode deposits. Although these deposits are rarely of much consequence on a commercial scale, these local deposits are nonetheless responsible for much of the gold that can be found in those states.

This cannot be said for New York however. The geology of New York State is not what you would expect for producing native gold, and it is believed that there are few if any noteworthy hard rock gold deposits within New York.

With that said, glacial gold deposits are still present here just as in all of the other states in the Northeast, so there is definitely some gold to be found. In fact, miners have shown us several grams of nice bright gold dust and “pickers” that were recovered from their own little secret spot somewhere in Upstate New York.

Unfortunately, any documented areas where gold has been found in the State of New York are very difficult to find.

The main reason that limited exploration and reporting of gold (and other minerals for that matter) has not been well documented is because of a silly law written into the state constitution that mandates that any gold discovered within the borders must be turned over to the state authorities. This applies whether the mineral is discovered on public land or even if it is found on private property in your own back yard.

Why anyone would ever come up with a rule like this is unknown, and even more bewildering is how it managed to stay on the books for over 230 years is hard to comprehend. Nonetheless, it is currently the law of the land in New York State.

Some very early reports from early settlers in the state indicated that they did in fact find a bit of gold, but the concentrations were so small that it did not warrant any significant interest and locations were not well documented.

The fact that gold can be found in such trace amounts has much to do with the lack of interest in gold mining compared to the fertile farm land.

Needless to say, this law has hampered most any serious efforts made to search for gold. No commercial gold mining operations would ever consider searching for gold in New York as long as this law is in place.

As far as recreational gold prospecting is concerned, there are a few things to consider. The law states that any gold discovered may not be kept. You can prospect for gold in New York; you just can’t keep the gold.

With that said, there are quite a few active gold prospectors in the State of New York, and we have a hunch that they are successfully finding a little bit of glacial gold. What they are doing with that gold, we will leave to speculation.

The information on gold occurrences in New York is pretty slim. However, using the knowledge that we have about glacial gold and how glaciers have deposited gold all throughout the Upper Midwest and northeastern U.S., we can speculate that nearly any area that was covered by glaciers at one time could potentially contains some gold.

Gold Panning in places where bedrock is exposed and easier to get to is always a good idea, particularly in the cracks and around the broken slabs where the stream water is being directed much like a natural sluice.

And: Where to Find Gold in Vermont

Most of the gold that is to be found using the panning method will be located in these cracks and places around the slabs. Find the darker colored streams with exposed bedrock. Fine gold will get caught down in the cracks and accumulate, and when you are prospecting for glacial gold, you definitely want to find some accumulations to make it worth your while.

Avoid areas that appear very light colored, sandy, or muddy, as these places are less likely to produce. Gold may be in the stream, but it will either by hidden beneath significant overburden that will require a lot of work to move, or it will be unable to settle down and be captured, thus moving it further downstream. This is true of all placer gold, but is especially important with glacial gold deposits due to their extremely fine texture.

With the repeated mention of fine textured glacial gold, it is worth noting that the occurrence of fine gold is not a rule in New York or anywhere else in the Northeast; sometime on rare occasions, the receding glaciers did leave behind coarse gold and an occasional gold nugget that a prospector can find. But it should not be exaggerated to say that this is a common occurrence, and it should definitely be understood that sizable nuggets in the Northeast are quite uncommon.

If you are fortunate enough to fine a nice sized picker or nugget in your pan then consider yourself lucky, but know that it can and does happen from time to time.

Naturally, because of the currently laws in the state, there have been relatively few publicized reports of gold discoveries in New York. Just don’t take this to mean that gold can’t be found. We know for certain that the same glacial deposits that are responsible for gold deposits all throughout the Midwest and Northeast have also left gold scattered all throughout New York State.

Next: Rockhounding in New York – Herkimer Diamonds & Much More!