In the foot of the California Trinity Alps lies the historic Gold Rush town of Weaverville, California. The story of Weaverville is like so many other mining towns in California gold country. The town went through its shares of ups and downs, booms and busts, robberies and gangs, settlement and mining activities. In the end, it turned out being one of the most successful mining towns in northern California history, particularly in a part of the state that is separated from the famous Mother Lode region. 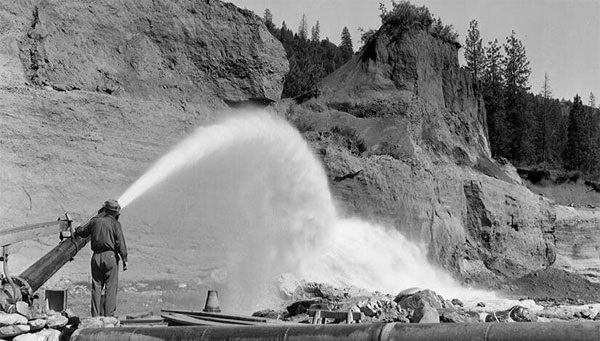 Hydraulic Mining was used at the Lagrange Mine in Weaverville to recover millions of dollars worth of gold.

Weaverville was founded in 1850. It was named by John Weaver. However, he named the town, left, and was never seen again, leaving the town with just his name and memory. Weaverville started as a town surrounding what is now Highway 2999W, part of the original stagecoach road. This road extended to the East to Old Shasta.

The first settler in the region was Jedidiah Smith who blazed a trail through to Southern Oregon in 1828. However, the land was not considered formally “settled” until 1844 when settler, Pearson B. Reading, received a Mexican land grant near Redding and named it Rancho Buenaventura. He built a house and established a farm north of the now Sacramento area and was known as the first to explore the Trinity River.

The fate of Weaverville was forever changed in 1848 when gold was discovered at Sutter’s Mill in Coloma. Suddenly, settlers were exploring throughout California and seeking their fortune. Reading himself mined the Trinity River as he blazed the now Shasta-Weaverville road, going from the Weaverville basin, up Rush Creek to the Lewiston area, over Trinity Mountains and then to the gold rush community of Shasta. It was his success that drew even more to mine the area.

In 1851, Weaverville consisted only of a tent and four log cabins. By 1853, a town began to grow, with the establishment of a school and hospital. That landscape soon changed as more people came into the area.

Soon after the town was officially incorporation in 1855 and after the election of city officials, the town’s development took off. Determining that the grounds were completely worked out, miners who were of European descent abandoned the area. The Chinese miners then essentially complete took over work in the Weaverville mines. It was common practice for Chinese miners to move into these “worked out” areas and continue working the land. The mines were far from depleted of wealth, and Weaverville quickly became a center for mining in California.

Therefore, it was then, in 1853, when the first Chinese miners came to Weaverville. It was a slow progression as they moved from Shasta following the work of companies that paid on a weekly basis. By 1854, these new settlers had established a Chinatown, complete with four stores, four gambling saloons and a restaurant. A Chinese temple called the “Joss House” was constructed in 1853. A fire destroyed the church in 1869 and was rebuilt in 1874.

The Joss House is the oldest, continually used Chinese temple in the State of California and has been made a State Historic Landmark.

Weaverville was hit by a disastrous fire in 1854, which destroyed most of the structures in the town. As a result, the buildings were rebuilt using red brick walls two feet thick to make sure that the town would never been lost again to a fire. 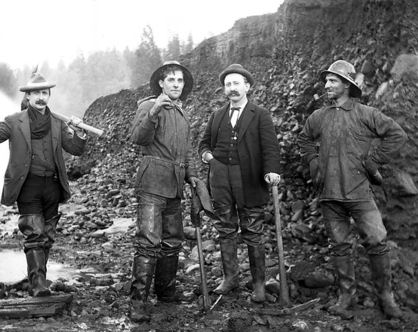 4 Gold Miners at a hydraulic mine in Trinity County, California.

New technology ushered in the start of a mining boom. Miners utilized aqueducts and pine log scaffolding to move water along the rocky and mountainous terrain, and water was pushed through the course of a canal. The La Grange mine was one of the biggest and most successful mines utilizing hydraulic mining in California. By 1870, the town was shipping over $1.5 million of gold annually.

The population of Weaverville took a sharp dive to 250 in 1870. Many attributed the dive in population to the floods of 1861 and 1862, which took out many of the structures built along the rivers, as well as the demand for soldiers during the American Civil War. The population began to creep back up in the 1880 as Chinese miners began to rebuild the places of earlier mines. However, numbers began to decrease again in 1886 and continued to dwindled during the early years of the 20th century. 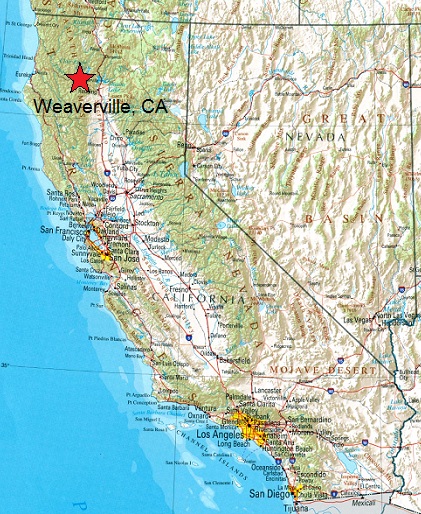 Weaverville is part of the region called the “Northern Mines” by the old-timers. It is in Trinity County near the city of Redding.

Weaverville: A Rich History with More Gold to Find

Like the Gold Rush itself, the history of Weaverville is certainly colorful. The town was full of your typical Old West mainstays: gunfights, stage coach robberies, and havoc wrecked by notorious figures like Black Bart. However, unlike most mining towns, Weaverville was home to over 2,000 Chinese miners. It even had its own Chinatown. Weaverville is now the largest population center in Trinity County.

Miners from around the world came to call Weaverville as the “golden land” where fortunes could be dug from the ground, and there is still plenty of gold left to be found today. The Trinity River still has lots of placer gold that can be found by panning and sluicing, and most of the tributaries in the area also contain gold.

Present-day gold miners are also successfully finding gold in the hills surrounding Weaverville by using metal detectors to search for gold nuggets. Old, ancient river channels contain rich gold deposits above the present day flow of the Trinity River, and there is lots of gold to be found here.

Also Read: The Lost Humbug Creek Mine in Siskiyou County

And: The Best Metal Detectors for Finding Gold Nuggets