The town of Wickenburg, located in Maricopa County, Arizona, holds a history of difficult times, of trials and of tribulations. The town also holds a history of survival and perseverance. Wickenburg survived years of Indian raids, mine closures, floods and droughts, only to continue to grow and prosper.

Wickenburg first became part of the United States due to the 1848 treaty that ended the Mexican-American war. American prospectors first came to the area after a gold strike on the Colorado River in 1862 near what is now Yuma. Thousands came to search the land and water throughout central Arizona, looking for their own chance at wealth.

The Vulture Mine was the richest gold mine in Arizona, and was responsible for the rapid growth of Wickenburg.

One of these first prospectors included a German miner, Henry Wickenburg. His mining success led to the discovery of the Vulture Mine in 1863. Over $30 million worth of gold would eventually come from this mine alone. Tragically, Wickenburg would later take his own life and died with no money, despite the fact that he accumulated so much wealth during his life.

The town was also home to Jack Swilling, the miner whose prospecting and irrigation efforts in the Salt River Valley in 1867 eventually led to what is now the city of Phoenix, Arizona.

After ranchers and farmers followed in the path of miners and established towns along the Hassayampa River, the town of Wickenburg was soon founded in 1863.

As the town of Wickenburg developed and grew, relations with the neighboring Yavapai Native American tribe steadily worsened. At the start of the American Civil War in 1861, which began right around the time the town was first discovered, all federal troops were taken from the area for war efforts, leaving the town and surrounding area completely unprotected. The tribe took advantage of this opportunity and began a series of attacks on the settlers.

By 1869, it was estimated that over 1000 Yavapai and 400 settlers had been killed in these attacks. At the end of the Civil War, Union troops were able to come back to the area, and the Yavapai were later forced onto a reservation, where they still remain.

The Yavapai people would still periodically raid farms, villages and stage-coaches throughout the years. Fights would continue, resulting in several murders of Yavapai chiefs and a massive assault on the town of Wickenburg, driving out a great number of the settlers living there. In response, General George Crook started a large campaign against the Yavapai, which resulted in one single, decisive battle in December 1872, the Battle of Salt River Canyon. This battle crushed Yavapai resistance. Once the tribe was subdued, Crooks entered into a treaty with the hope of reducing the size of the Yavapai reservation, moving it to an area further away from American communities. 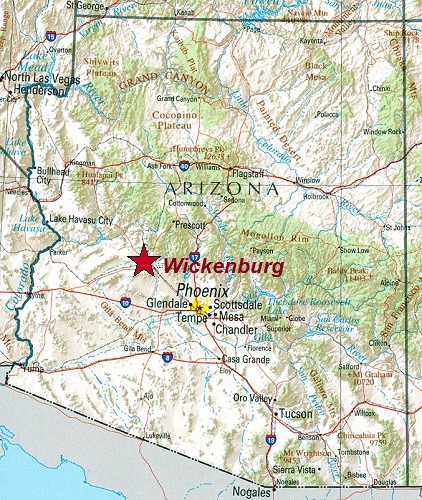 Richness of the Vulture Mine

Some of the original buildings in this mine town were created from discarded ore from the Vulture Mine. After the mill was in operation, these original structures were then torn down and run through the mill. Over $2,000 in gold came from just the assay office. With all of this gold coming from one building, one could imagine the amount, which would be thousands of dollars coming from the other structures.

Wickenburg’s success would not last through the latter half of the 20th Century. Like so many other mining towns, the efforts needed during World War II caused the demise of the mine as non-essential mines were closed so more efforts could dedicated to the war effort. In fact, in 1942, the Vulture Mine was shut down by the government for processing gold.

The war efforts specifically put a restriction on the materials that could be mined, and the gold processing Vulture Mine was doing was a direct violation. At that time, all resources were to be focused on the war effort, which required mining for other metals. The representatives at Vulture Mine did appeal this shut-down order, and the mine reopened for a brief period of time. However, that time would be short-lived, and in a few years, the mine would be close permanently.

The ghost town stands as a reminder of the boom and bust of the gold rush. Today, the Vulture Mine are privately owned and viewed as tourist attractions. The owners of these spots offer dirt path guided walking tours through the mine, offering tourists a glimpse into the life of a gold rush mining town.

Often old mining towns become deserted after all the miners leave, but this is certainly not the case with Wickenburg. The town now has a population of over 6000 residents, although very few of them are miners. Its location at near Phoenix, as well as the confluence of Highway 60 and Highway 93 also helped to keep this town alive and thriving today.

Wickenburg has embraced its mining past, and the towns still has the feeling of an Old West town. You can walk the streets of Wickenburg and have the feeling that you have gone back in time during the height of the gold boom.

It is through these glimpses of the past that the town lives on and will continue to do so throughout history.

Wickenburg is located in the Sonoran Desert north of Phoenix.

While mining has subsided in Wickenburg for the most part, there are still plenty of small-scale gold prospectors that are finding gold while exploring the Sonoran Desert around Wickenburg.

Maricopa County is the 5th largest gold producing county in Arizona, and all this gold certainly wasn’t just found at the Vulture Mine. There is a considerable amount of placer gold in the desert washes around Wickenburg and throughout the county.

Since this is a very arid region and water is limited, the most popular prospecting method to find gold is with a metal detector. Gold nuggets can still be found in the desert washes and there is still considerable gold left to find. So if you’ve ever wanted to find some gold of your own, go ahead and try a bit of metal detecting while you explore this beautiful mining town in Arizona.