These two metals detectors seem to have a lot of similarities from the outside but are quite different in how they function. Each detector has different strengths, which will depend on the type of detecting you intend to do.

As the name suggests the Garrett AT Gold

metal detector was designed specifically for use in the highly mineralized areas where gold is mostly found. Designed to find gold nuggets in a highly challenging environment, this device is optimized to operate at a high frequency so as to discover gold and in addition it has a true all metal mode if you want to discover other metals too. This device is also a Motion All Metal detector and thus requires a slight motion to maintain the detection although for a pinpoint mode works best for static detection of the targets.

Structurally, the AT Gold is designed in a similar fashion like most of the other Garrett metal detects. It is made to break down in a number of places to allow for easy storage and transportation. It has a control panel which houses an inbuilt speaker and a 4 AA batteries compartment, a lower and upper stem and a search coil together with a wing nut. The control panel has a LED display and easy to use buttons.

The Garrett AT Gold comes with both an automatic and a manual Ground Balance. To optimize its performance when used in highly mineralized soils, the detector has a Ground Balance window for making the necessary tweaks. It is also waterproof up to 10 feet and thus is efficient for gold detection in shallow freshwater rivers and lakes.

While the AT Gold is marketed primarily as a gold detector, it can be used to find all metal targets such as rings, relics, gold coins, jewelry, buried treasures, and artifacts. You can also use the All Metal Mode to hunt for other metallic items such as iron relics by adjusting the discrimination settings. 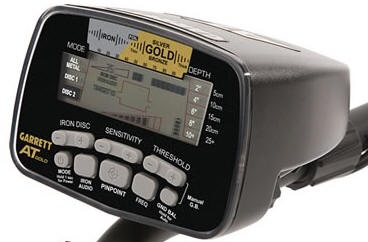 The visual display on the Garrett AT Gold.

Check current price on the Garrett AT Gold

The Garrett AT Pro

is one of the top selling metal detectors in the world. The devices can detect any metal and can handle literary any manner of a terrain. The detector can find almost any metal target and in almost any condition. This makes it a number one priority metal detector for anyone interested in discovering metals. The machine comes with few parts and thus it is easy to store, carry around and maintain.

The Garrett AT Pro is an all-terrain metal detector fitted with sophisticated and patented Garrett technology for use with both hobbyist treasure hunters and professionals. You can use the device almost anywhere be it in deserts, along the beach, in shallow streams and lakes and in rivers without having to worry about anything.

The metal detector has both the standard and professional search modes that have improved audio features to make detecting metal targets easy. Being versatile makes it ideal for general coin, jewelry and relic hunting.

The Garrett AT Pro metal detector is black in color and is designed with an extendable arm and cam locks. It is made up of the control panel, lower and upper poles, a wing nut and the search coil. The design of these components makes it easy to assemble the whole system. Unlike the AT Gold the AT Pro detector does not have internal speakers and only has a headphone socket, but since most people use headphones when detecting this is not a concern for most detectorists. The control panel houses a 4 AA batteries compartment that powers the whole system.

The AT Pro LED interface is quite user-friendly. A lot of information is displayed on the screen and this makes it easy to operate it. The Digital Target ID moves between 0 and 99 and this makes it easy for you to decide whether to dig a target or not. The buttons to control the device are strategically located on the control unit and are well labeled making it easy to use the device. 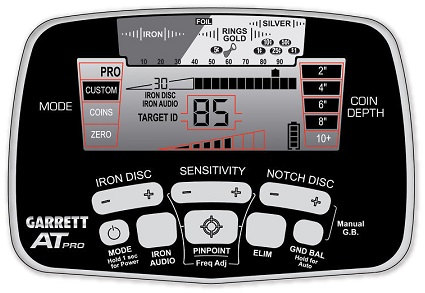 The display screen on the Garrett AT Pro.

The Garrett AT Pro comes with a number of search coils that gives you the option of choosing one that best works for you. The standard search coil is the DD Proformance 8.5″x11″ submersible search coil. As the name suggests this coil is fully submersible and you can use your metal detector in water with the same efficiency as when on dry land. It is important here to note that the standard headphones of the Garrett AT Pro metal detector are not waterproof and thus you should change them if you want to use your device in water.

* Total weight: 3.03lbs
* Detection modes: The AT Pro comes with 6 detection modes (3 Pro modes and 3 Standard modes). Each of these modes has 3 discrimination modes (Custom, Coins, and Zero)
* Target Identification (TID): lets you identify the target to pursue and those to discard
* Pro Mode Audio: Lets you hear and gain more insights on the target. The tone ranges depending on the conductivity of the target with silver being the highest and iron among the lowest.
* High-Res Iron Discrimination: it has 40 levels to help you avoid worthless metals such as rusty nails
* Iron Audio: This feature helps you identify iron thus making it easy to identify what you have found.
* Detector Frequency: 15 kHz frequency
* Automatic Ground Balancing: make it easy to use the device as you simply needs to press a button.
* Battery Condition Indicator: tales the level of your battery usage
* Pinpointing: Identifies the target location in the ground

Check current price on the Garrett AT Pro

At first glance the Garrett AT Gold

and Garrett AT Pro

seem to have a number of similarities. They both are designed for use on rugged terrain and can also be submerged in shallow freshwater. They also have a target identification signal runs from 0-99 to rate the conductivity of the target metal. This helps make it easy to identify various metal targets so that you know what you are going after.

The Garrett AT Gold and the Garrett AT Pro have both manual and automatic ground balancing that helps with counteracting the ground mineralization. They also come with iron audio and iron discrimination systems that help detect and separate iron elements from trashy targets. Both detectors also have quick recovery time which is great for distinguishing different targets.

On the other hand, there are a number of features that distinguish the two Garrett metal detectors. This means that the Garrett AT Pro has additional features which often make it better for general use compared to the Garrett AT Gold which is designed for gold prospecting and is better when working on high gold mineralized soils.

On its part, the Garrett AT Gold metal detector was designed with gold prospecting in mind and is thus well adapted to detecting metals in iron-rich gold-bearing soils. The devices run at an 18kHz frequency which is ideal for locating very small targets like gold nuggets. When operated in the ALL Metal Mode the device has high sensitivity but less depth detection.

And: 15 Metal Detectors that will Find Gold Nuggets

And: The Garrett ATX – Designed for Deep Gold Nuggets

You simply can’t go wrong with either of these detectors, but depending on your hunting areas you are will find that each detector has different features that are preferred.

If you are a dedicated gold nugget prospector, then there is no doubt that the AT Gold is the better choice due to its higher sensitivity to small targets and ability to run smoothly in mineralized soils.

If you are looking for more of a multi-purpose detector that you can use for hunting coins, jewelry, and relics then the AT Pro is probably the better choice as it will give you slightly better target detection at depth, and will also be more sensitive to silver.

You really can’t go wrong with either of these great detectors. Once you learn the features they are both great values for the price, and will work well regardless of the type of hunting you are doing.