The Merced River is an important gold-bearing river in northern California. The river flows through the heart of the Mother Lode, the richest gold regions in California.

The river is a tributary of the San Joaquin River. When it comes to gold mining the river is famous for the Yosemite Valley which was an important gold prospecting place during the Californian gold rush of late 1840s.

The Merced River got its name from a Spanish explorer who gave the river the name ‘El Rio de Nuestra Señora de la Merced’ (meaning River of our Lady of Mercy) because it was the source of the water used for irrigation downstream.

When gold was first discovered in California by James Wilson Marshall on the American River many miners came to the area and prospected many rivers including for Merced River gold.

Merced River gold was first discovered the in 1849 and soon gold was being mined almost in every part of the river. Some of the places where gold was being mined on the river and its tributaries include at Dry Creek, Bridal Veil Creek, Sunrise Creek, Read Peak Fork, Tenaya Creek, Illouette Creek, Cascade Creek and Yosemite Creek among others.

Snelling is one of the most important gold rush towns in this area that still remains today. The town is located along the Merced River in the Snelling district near Merced Falls. It was an important dredging field during the later days of gold mining in California.

The town was established as a mining camp in early 1850s when placer gold was found in the nearby waters. It was named after Charles Snelling in 1851. With its rapid growth the town was elected to serve as the county seat of Merced County in 1857 until 1872 when it was replaced.

First gold in the nearby waters was mined by panning and sluicing, then later hydraulic mining was introduced. Dredging was used for the first time in 1907 and continued until 1952. It is estimated that gold worth about $17 million was mined around the town.

People still visit different parts of the river to look for gold. Finding gold isn’t as easy as it used to be, but you can still get valuable gold nuggets by panning the river. Metal detecting the old dredge tailing piles may also be productive.

This is one of the best place that you can prospect for gold on the Merced River. The Briceburg Area off Highway 140 allows for limited gold prospecting using non-motorized equipment. You can pan for the gold in the area with no problems and there are many tributaries that you can explore and find gold in this area.

This forest offers you a great opportunity to pan for gold along the waters of the Merced River. Most of the gold mined in rivers in the central valley originated from the Sierra Nevada Mountains. This makes the forest a great place for every gold hunter to visit given its location. The Sierra National Forest has considerable areas in which you can prospect for gold.

Some of the best place to start would be on seasonal streams as they are likely to be less exploited. Merced River gold is well-known and the river has a number of active claims within the forest and you will need permission from the owners to mine the claims, whereas some of the smaller tributaries are still unclaimed but still contain good gold. 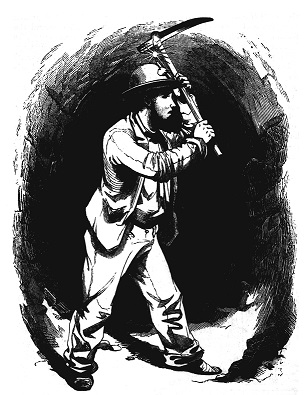 The Merced River Recreation Area is a popular recreation where you can do a variety of outdoor activities including small-scale gold prospecting as well.

The recreation area is located off Highway 140 on the Main fork of the Merced River between Yosemite National Park and the Sierra National Forest. Here you can enjoy gold panning, fishing swimming, rafting, picnicking and hiking among other recreational activities. There are plenty of areas that you can explore with your gold pan.

There are a variety of different methods that you can use to find gold in the Merced River, but the gold pan may still be the simplest and least expensive way to find some gold. Their simple designs has been used for centuries to recovery placer gold from creeks and rivers.

If you are looking for an inexpensive way to get started finding gold, buy a simple gold panning kit

and find an area along the river where it looks like the old-timers already did some digging. This is a good indicator that there is gold in the area.

Use a classifier to sift out the larger rocks and gravel, and then carefully pan out the finer materials. With a bit of prospecting you have a good chance of recovering some nice gold.