Early on in the Gold Rush, Major William Downie and his party of twelve prospected the area in November of 1849 as they and many others headed up the Yuba River area in search of fortune. They struck gold and built a cabin to wait out the winter weather. 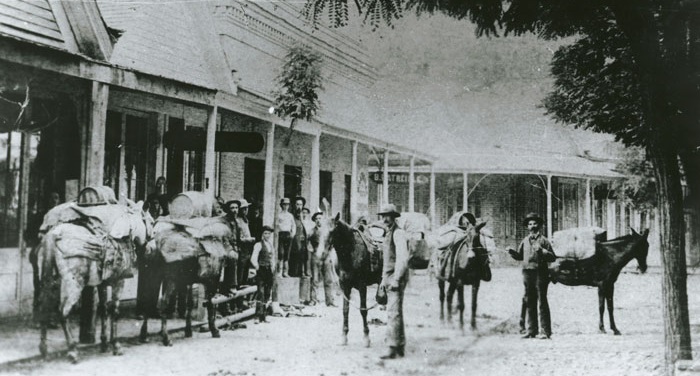 Miners in downtown Downieville load up with gear to bring back to their claims.

By 1850, the town was laid out and named after Major Downie. Before him, the region had many names such as Jim Crow Diggin, Washingtonville, The Forks, and Missouri Town. In the end, the name Downieville stuck as it was the beginning of the town’s gold mining boom.

In fact, it was such a hot bed of gold mining activity that at one point claims were fixed at 30 feet per man, a testament to the richness of the placer mines. So much gold was present that one account tells of a housewife sweeping her kitchen floor found $500 worth of gold. Other accounts claim that three men from Tin Cup Diggins would fill a tin cup with gold every day. Another claim of 60 square feet would yield $80,000 dollars in six months.

There were various large nuggets found. In 1850, a 25 pound nugget was found. Another notable specimen of gold in quartz matrix weighed 427 pounds. 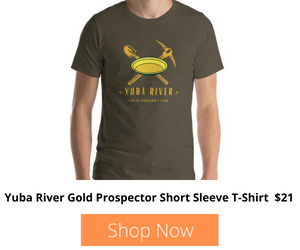 In the spring of 1850 every square inch of the town was occupied. There were 15 hotels and gambling halls, 4 butcher, 4 bakers, and business and tradesmen everywhere. By 1851, there was a population of over 5,000 people living there.

Joseph Zummwal is known to have had a major impact on society in Downieville. He arrived to mine the area known now as Zummwalt flat. He is said to have founded the first chapter of the Ancient and Honorable Order of E Clampus Vitus (ECV). An organization dedicated to the preservation of the heritage of the American West, specifically geared towards the Mother Lode and gold mining regions of the United States. The organization today stands strong with chapters in California, Nevada, Idaho, Oregon, and many other western states. With early founding similar in style to the freemasons, their history and folklore, steeped in much mystery.

As with any mining town, there are tensions. Crime and violence was for many a way of life. The Wild West, was just that, wild. One such account told to this day is that of the hanging of a young girl named Julia. A young Mexican girl, Julia that was found guilty of murder. She was tried and convicted the same day of her crime. Her sentence was hanging, which was promptly executed. She was tied to a beam over the Yuba River. It was the only known hanging of a woman in the state of California.

Downieville was also the first state capital for California. Later the seat was changed to Sacramento because of the lack of accessibility due to weather.

And: Gold Mining on the Yuba River 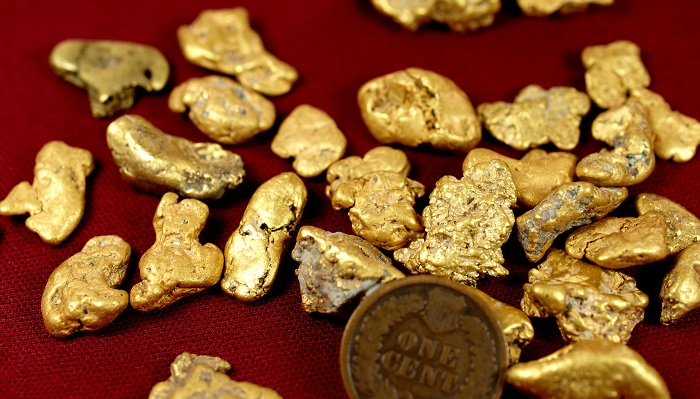 Collection of large gold nuggets found at a gold claim on the Yuba River near Downieville.

The land itself is very interesting from a geological point of view which made mining that much more interesting and elaborate. In the north, there are mostly beds of phyllite, slate, and quartzite of the Calaveras Formation. To the west however is mostly greenstone, amphibolite, and serpentine. The higher ridges were capped by Teritiary andesite and in some places overlaid by tertiary auriferous gravels.

Many Gold-quartz veins, mostly in greenstone and slate, occur in the region. The veins have a range up to ten feet in thickness. The ore itself, contains free gold as well as sulfides. The milling grade usually averaged between 1/4 and a 1/3 ounce per ton. Tertiiary channel gravels contained extremely coarse gold. The earliest and richest mines were Blue Banks, Sailor Ravine, and Tin Cup Diggins and the Gold Bluff.

As was the normal trend of mining towns in at the time, by 1865, the region was dwindling and the boom had passed. The surface placers being exhausted led to hydraulic and drift mining. This continued until World War II.

Modern suction dredging as well as other mining methods for gold has continued from time to time since. Today, Downieville is a very pleasant town to visit. Many of the original structures still exist for visitors to explore which is not common for towns of the era. You can relive one of the most active and thriving towns of the gold rush.

Next: These 3 Huge Gold Nuggets were found in California