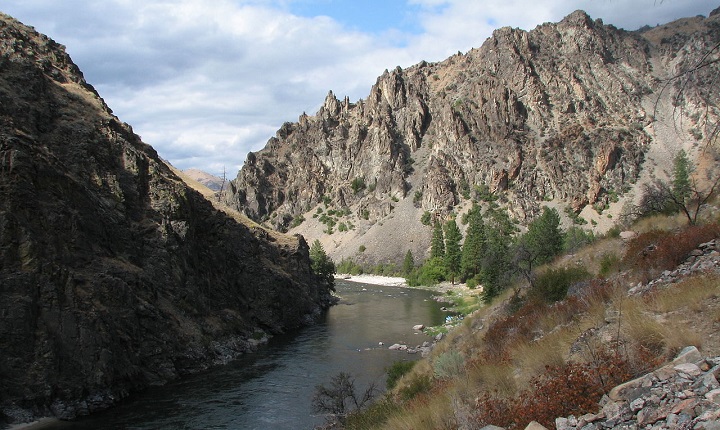 There are many old ghost towns hidden within the remote mountains of central Idaho.

Idaho is one of those states that hasn’t yet been spoiled or overrun by tourists. While many so-called “ghost towns” throughout the western United States have become tourist attractions with thousands of visitors annually, there are lots of Idaho ghost towns that very few people have ever even heard of.

Idaho is also the most remote state in the lower-48, which means that you really have to make an effort to get to some of these places. Some of them are well off the beaten path and require good high-clearance vehicles and 4-wheel drive.

Most of these towns are completely inaccessible during the winter due to deep snow.

Make certain that you are properly prepared for a day in the backcountry before you visit any of these places. Some of them are several hours from the nearest town, so always be prepared for a safe trip.

Gold was found in Florence during the winter of 1861, shortly after Idaho’s first gold rush to Pierce earlier in the same year. By the following spring there were several thousand miners searching the creeks around Florence.

Florence is just 14 miles northeast of Riggins as the crow flies, but it takes some time to get there because it is perched high above the main highway that goes along the Salmon River. Most of this Idaho ghost town is within the Nez Perce National Forest and just west of the Gospel Hump Wilderness.

The first miners here panned for gold in Black Creek, Hi Yu Creek, Healy Creek, French Creek and a handful of other drainages in the area. The gold deposits were rich, but they were mined out quickly. Interest was renewed for a short period when some hardrock quartz mines were established, but they were never significant enough to justify a large population of miners. By the mid-1900s, Florence had become a ghost town.

A miner washes away dirt and overburden in search of rich gold paydirt below.

Cuprum was a large copper mining camp in the late 1800s. It is located on southern end of the Seven Devils Mountains, and is most easily accessed from Council.

The other way to get to Cuprum is by taking Kleinschmidt Grade, a road that goes from the bottom of Hells Canyon up to Cuprum. This road was built with the intent of shipping copper ore from the mines of Cuprum down the Snake River to the smelters. These plans never actualized, but the road was completed nonetheless. Just be warned, this is not for the weak of heart, as it is a steep grade and will test your nerves to drive up it.

Cuprum has some summer homes today, but it is a far cry from what it was during the height of the copper boom.

Yellowpine is a small community deep within the Idaho wilderness. It is located about 50 miles west of McCall. It can be access via the Lick Creek Road, but that route is slow-going. The better way is to go down to Cascade and take the better road that follows along the South Fork Salmon River.

Stibnite is the primary mineral that has been mined in Yellowpine. Some gold can be found by panning in the Salmon River and most of its tributaries, but Stibnite is the reason that this town exists.

There are some fun activities here in the summer including the Yellowpine Harmonica Festival. This is beautiful country that has many hiking and fishing opportunities. It takes some effort to get there but it will be well worth the trip.

Warren is located about 50 miles north of McCall. It is access via Warren Wagon Road that goes north past Payette Lake toward Burgdorf. The town is just outside of the boundary of the Frank Church River of no Return Wilderness.
The discovery of gold in Warren was in 1862, shortly after the strikes at Pierce and Florence.

The richest gold deposits here were found on Warren Creek, and several miles of the valley was dredged up during the mid-1900s. A considerable amount of gold was recovered from these mining operations and the dredge tailings can still be seen today through Warren Meadow.

Placer gold was discovered on Yellowjacket Creek in 1869, several years after most of the gold rushes in Idaho. The town of Yellowjacket was established.

This is an area that you really have to make an effort to get to. It is extremely remote and nestled within the Frank Church Wilderness, the largest wilderness area in the United States.

The placer gold played out quickly, but a quartz lode was discovered and a huge stamp mill was brought into this remote area to crush the ore. While there is no more gold mining going on today, there are still some nice remnants of the past making it one of the most spectacular of Idaho’s ghost towns. In particular, a large 5-story hotel to house the miners that still stands.

This was a mining town that boomed quickly after the discovery of gold on Napias Creek just west of Salmon, Idaho. At its peak there was an estimated population of 7,000 people in Leesburg.

Gold was rich throughout several miles of Napias Creek, and many mines were scattered throughout the canyon as hard rock sources of the gold were discovered. As the easy gold was mined out, ditches were constructed so that hydraulic mining could be used to wash the bench gravels.

Although very few people have even heard of Leesburg, it was a major mining town for many years. Today only a few old building, along with the scars of hydraulic mining exist today to prove the existence of this amazing Idaho ghost town.