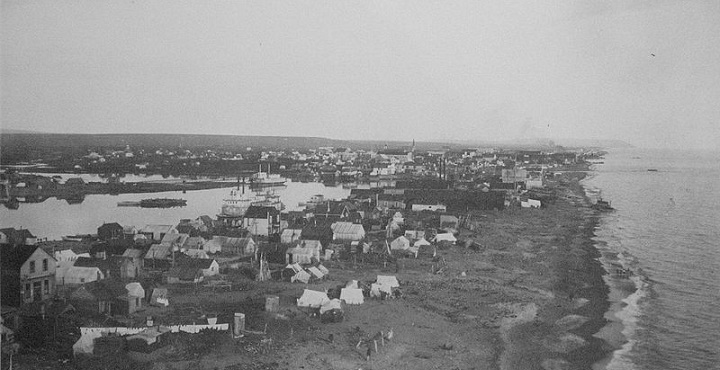 Nome is a fascinating little town in western Alaska. It started out as a mining town when gold was discovered in the sands along the beach back in 1898.

Nome is still a mining town, with a population that grows to several thousand people in the summer.

Within one year there were over 10,000 men in Nome mining for gold. And boy did they find it!

The gold deposits were widespread, going for miles in each direction from Nome. Miners camped for dozens of miles along she shoreline using gold pans and rocker boxes to sift through the beach sands for tiny flakes of gold.

The gold was widespread, but the quantities weren’t profitable to mine for everyone. In some areas it was difficult for a miner to make a living. In other places men were recovering enough gold to make them rich for a lifetime.

Nome has gotten considerable interest in recent years as the value of gold has risen. Areas that were unprofitable to mine a few years ago are once again very rich.

The advancement of mining technology has also allowed new areas to be opened up to prospectors. In particular, large suction dredges now allow miners to mine the floor of the Bering Sea at Nome and work ground that was inaccessible to the early miners.

Mining for gold in Nome, Alaska is not for the faint of heart, and it has many challenges. The remoteness of the town combined with the short mining season can make for a very risky mining operation.

Still, thousands of men and women still come to Nome, Alaska each year in hopes of striking it rich. And some of them do!