South Dakota has a rich geology that contained precious metals and minerals. The news of gold in South Dakota brought in hundreds of thousands of miners and fortune seekers over 120 years ago when news of gold discovery first broke out. 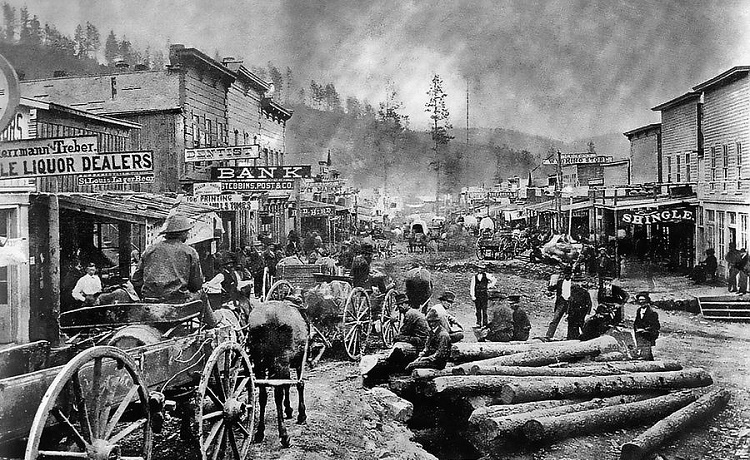 Many of the places where gold or any other precious metal ore was discovered mining towns sprang up. Most of the towns, however, quickly diminished when the mineral ore was exhausted.

Here are just a few of the surviving South Dakota ghost towns that were left behind after the gold miners left.

Maitland, which initially was called Garden City, was booming mining community during the famous Black Hills Gold Rush before being abandoned in 1915. The town was established in the 1870s as Garden City when the Garden City Mining Company established a gold mine near the town site.

Several other gold mines such as the Rainy Day, the Gold Eagle, the Penobscot, the Columbus, the Beltram, the Deadbroke, and the Echo were also established nearby. The city changed its name to Maitland in 1902 when Alexander Maitland bought the Penobscot mine.

By 1915 the ore in the area had been completely exhausted and most of the early settlers left. The mines were re-opened briefly during the 1930s when new mining technology was invented but were shut down for the last time at the start of the Second World War.

Today most of the early buildings in the town decomposed or were destroyed in fires. Visitors can see the original Alexander Maitland’s houses, the office building, and the livery barn.

Etta is located on Glendale Road at about a mile south of Keystone. The town was established in the early 1880s following the discovery of tin ore near the Black Hills. The Harvey Peak Tin Mining, Milling and Manufacturing Company established a mill to smelt the Cassiterite mined in the area and this brought in a lot of people seeking their fortune.

Mining near the town was on and off for many years. First tin was mined, and then later lithium ore was mined in some of the old tin mines.

Mining was finally shut down for the last time in 1959 leading to the decline of the town. Today visitors to this ghost town can see the lithium mine and the foundation for the mill and a number of old buildings from the early years.

Flatiron was a successful gold mining community around Yellow Creek within the expansive Black Hills. The town was home to the famous Wasp No.2 Goldmine and several other smaller gold mines established in the 1890s. The town continued to flourish in the 1900s having a school, several mills, and many businesses.

Following the flood of 1927, the town began to decline and was later abandoned when the mining stopped. Today nearly 80% of the original town is reported to have sunk into the tunnels below. Visitors can see a few original structures, the original Wasp No.2 Mine, and the Little Blue Mine.

The town of Greenwood was established in 1885 as a gold mining camp to the southwest of the Black Hills and Boxelder Creek. The town grew quickly over the first few years and at its peak it had a school, a post office, boarding house and several other businesses.

Spokane was an important mining camp located in Black Hills within Custer County. The town was established in 1890 following the discovery of gold at the Spoken Mine, but mines in the area also produced copper, lead, zinc, graphite, silver, mica and hematite.

Today visitors to the town can see the original school house, a root cellar, a number of old cars and a few other old structures.

Tinton is located in the Black Hills just behind Spearfish Canyon and Iron Creek. Tinton was established as a gold mining camp but soon mines in the area begun producing tin and therefore it grew primarily as a tin producing town.

Gold was first discovered in the Negro Hills in 1879, bringing in many miners who set up mining camp to the north of the gold fields. Tin was then discovered in the area in 1884. By 1904 the Tinton Company and the Black Hills Tin Company had set up base in the town to mine tin. This brought in more people to the town making it one of the largest boom towns in the Black Hills.

At its peak, the town had an assembly hall, a post office, a weekly newspaper, a bank and smelting mills. A sawmill was added in the 1930s and lithium and feldspar operations in the 1940s.

In the 1950s there was a decline in the ore and the town begun to decline. Then it was abandoned when fire destroyed the sawmill. Today most of the early building still stands with small mining operations being conducted by the Tinton Enterprises.

While some of the earliest towns to be established were from gold mining in the Black Hills, there are countless others that were established as farming and ranching communities. For whatever reason, they are long-gone today.

Searching for the old ghost towns scattered throughout South Dakota can be a fun and exciting adventure.