Hundreds of towns in Kansas flourished for a few years then died as a result of bad weather, depletion of minerals, railroad construction or local politics. This left behind a lot of historic ghost towns of which some still stands up to this day. 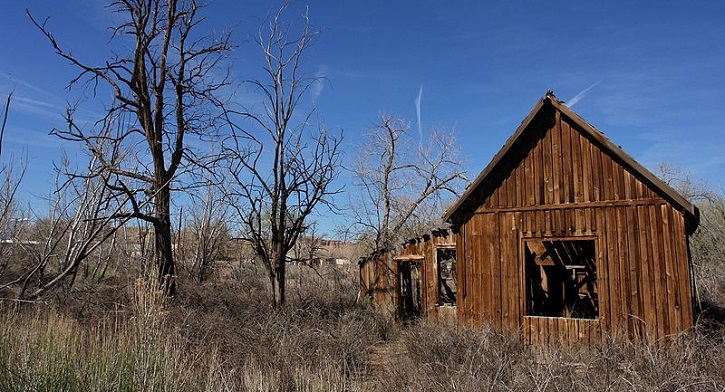 Here are six historic ghost towns in Kansas that are worth a visit.

The site for Empire City is located on 120 acres of land along Short Creek just north of Galena. The town was established in 1877 when the West Joplin Lead & Zinc Company bought land around the site for mining operations. The discovery of lead near the site brought in more people looking for mineral wealth and by 1877 the town was already established with saloons, a post office, restaurants, general stores, gambling houses, a school, hardware stores, churches and company offices.

The city was officially incorporated in June of 1877 and by the end of that summer, it had a population of over 3,000 people. Being close to Galena create a fuse with each mining city trying to outshine the other. However, it was soon discovered that more lead deposits were on the side of Galena than those found near Empire City.

By the mid-1880s lead deposit around Empire City began to diminish and so did its population. The town’s population had reduced to just over 1000 people in just a few years.

In the early 1900s, the mining around the city was almost diminished and the people began to move out. In 1907, Empire City was made a suburb of Galena and 1913 the post office was closed down. Today you can see a number of historic buildings still stand at the original site of Empire City.

Treece is another important boomtown in Kansas that you should visit. The town is located in Cherokee County in the Southeast corner of Kansas on its border with the state of Oklahoma and about 12 miles from the Missouri border. The town grew as a result of the discovery of lead and zinc near the site.

By 1917 the town had a post office, business and was producing the highest quality lead, zinc and iron in the county. At its peak, the town had over 1000 people.

By 1970 lead and Zinc mining began to decline and so did the population of the town. The post office was closed in 2004 and in 2011 the town was closed down by the government due to environmental impacts of lead poisoning. All the remaining people were evacuated in 2012 and today the site of the town is now a Superfund site waiting for the environmental cleanup.

This mining ghost town was established in the 1860s. The town was an important coal mining center in Kansas in those early days. It was bought by T.J. Peter of the Atchison Topeka Santa FeRR who renamed it Centennial City before the town borrowed his name. At its peak, the town had over 600 people, 4 churches, general stores, hotels, bars, brothels, a doctor, a judge and many other small businesses.

The town was kept afloat by 2 strip mines nearby that provided resources to run the town. With no police, the town was chaotic, especially at night. The town began to decline in the early 1900s when cheaper coal was discovered in other places within the state and finally the school was closed down in 1964.

With the end of coal mining, the town was taken over by farmers and ranchers but tornados that ran through the town destroyed it and today it is a ghost town with little to show for its once vibrant life. Today what remains is a church, the original schoolmaster’s house, an old coal weighing foundation and few houses.

Elk Falls is not completely deserted as it now has a population of slightly over 100 people. The town was established in 1870 by R.H. Nichols and named Elk Falls in 1871. The same year the town became a temporary county seat for Howard County.

In 1875 the town got its own flour mill built by L.J. Johnston and E.A. Hall. By 1880 the town had a Baptist and Methodist churches, a school house, general stores, saloons, a post office and a population of over 500 people.

The town is also home to the National Register of Historic places’ Pratt Truss Bridge which was constructed across the Elk River at a cost of $2,000 in 1893. The decline of the town began in 1927 when the mill was closed. With some of the old structures still in place, Elk Falls is still a great place to visit.

And: Public Gold Mine Tours in Colorado

Pawnee was Kansas Territory’s first capital in 1855. It was the capital of Kansas for just 5 days before legislators voted in favor of Shawnee Mission which was slavery-friendly. The city was 150 miles from the Missouri border and most proslavery legislators felt threatened by the distance from another proslavery state.

With the movement of the state capital, it began its decline almost immediately. The town was then destroyed by the arm following an order from the then Secretary of War Jefferson Davis. Today only the old capital building still stands. It is now the Fort Riley Museum.

Mildred is an important ghost town in Kansas. The town was established in 1907 when a cement processor was set up near its site in the Allan County. The town borrows its name from the daughter of a local industrialist J.W. Wagner. The city flourished during the heyday of cement production and it got a passenger depot and spur lines thanks to the Missouri-Kansas-Texas Railroad.

The city faced a great decline in the 1950s and now only a handful people remain. Most of the old structures in the city remain unoccupied as most of the businesses closed down when people began moving away.

Next: Where to FInd Gold in Kansas