These Louisiana ghost towns have some amazing history. Explore them at your own risk!

Deep within Louisiana’s bayous and swamplands are some of the most strange, deserted ghost towns anywhere. 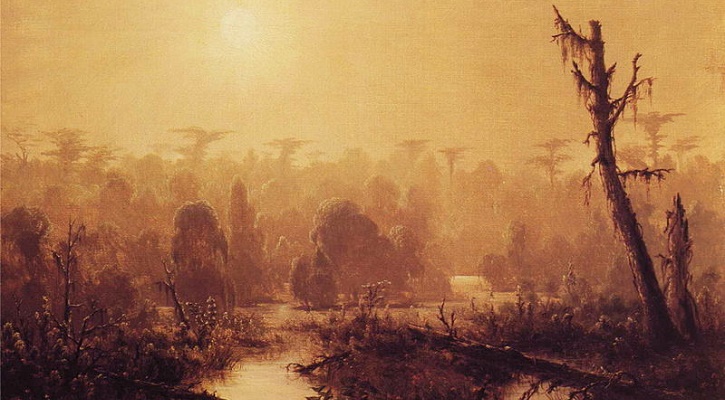 From a picturesque town adored by sportsmen who fished its plentiful waterways – to an entire community gobbled up by a giant sinkhole. That’s the grim reality of Bayou Corne, Louisiana. At first, residents had no real concern about the bubbles that gurgled in the bayou. Then on August 2, 2012 a sinkhole began its greedy consumption, signaled by crude oil suddently gushing out of a nearby pit.

Upon inspection, it was discovered that the sinkhole was caused by underground salt mining. The walls of the salt dome beneath the city completely collapsed. Residents evacuated the city and today, all that’s left of Bayou Corne is a 750 foot, 24 acre hole…that continues to grow.

The town of Burrwood rests in a watery grave caused by erosion along the coast. During WWII, it served as a naval base that housed heavy artillery and watchtowers. The base also supported patrol boats, destroyers, and underwater naval mines.

The 1950’s saw Burrwood become a weather and hurricane station which the United States Weather Bureau manned. In those days, the city had vibrant signs of life with families, homes, and schools. No signs of life (other than aquatic life) remain today.

This town was founded in 1902 with the expectation of being an important shipping and railroad city because of its prime location. However, some may say this ghost town was cursed, considering the series of events that lead to its abandonment.

Ten years after it was founded the town levee gave way in the great Mississippi River flood. In 1927, Torras again suffered a levee break in the Great Flood of that year. The town was all but destroyed, but managed a moderate rebuild with its last dying breaths.

But it wasn’t water that killed off the town of Torras. The community was crushed when the railroad relocated some years later. Not a single building marks the location of the town that ceased to exist.

La Balize was first inhabited in 1699. Sadly, this oldest Louisiana French settlement met with disasters from which it never recovered. The town goes down in history for its economic importance to the area. Several hurricanes hit La Balize, then in 1740 it was washed away.

The town was rebuilt and renamed, but the death blow was a hurricane in 1860, when all residents fled the town. All traces of this ghost town were subsequently erased by another hurricane in 1865.

At the turn of the 20th century, this (now) abandoned town was a lumbering operation hub. The eventual cause of death was slow drowning. The same levee broke two years in a row (1912 and 1913) and flooded the area. In the years 1973 and 2011, East Krotz Springs was entirely submerged because floodgates were opened to relieve high water levels on the Mississippi River.

Like many ghost towns, not a trace remains of its residents or structures.

Alberta saw success during the timber boom at the turn of the century. It was a lumber camp and sawmill town that grew by leaps and bounds with a sawmill, church, school, stores, and more.

Many of these businesses and residential housing were blown away in a 1952 tornado.

The town rebuilt the sawmill, which remained open until the 1990’s. Alberta’s other businesses failed over the years without the sawmill industry. The area is deserted, with only open thicket to show for its existence.

Morrisonville met its end, not from a natural catastrophe, but by man-made disaster. The town was founded by freed slaves that settled in the community in 1889. The town’s boundaries shifted in 1921 because of levee issues.

Then, in 1958, Dow Chemical Company began to produce vinyl chloride, which found its way to wells in the area by the 1980’s. Residents were forced to sell their homes to Dow; the business was aware the pollution could result in lawsuits. All that remains of the ghost town are the cemetery and a historic marker.

And: The Lost Bill Kelly Gold Mine in Texas

The swamps and bayous hide many secrets from the past. Some towns still have remnants of old structures to let you know where they once stood. Others have been erased with the hand of time and nothing remains.

Flooding, sinkholes, tornados, and big business were some culprits in the death of a litany of towns in Louisiana. With no people or buildings on these sites, all that’s left in their place are history’s memories – and maybe a ghost or two?