There are a number of iconic Indiana ghost towns that are worth visiting. Like most other states that lie between the Rockies and the Appalachians, most of the state’s ghost towns are very old and have been reduced to forgotten ruins.

Indiana is an agriculturally rich state and attracted many immigrants when the territory was opened up for settlement. Many boom towns sprang up after the civil war due to a number of factors such the railroad construction, steel and automotive industries, agriculture and even mining. 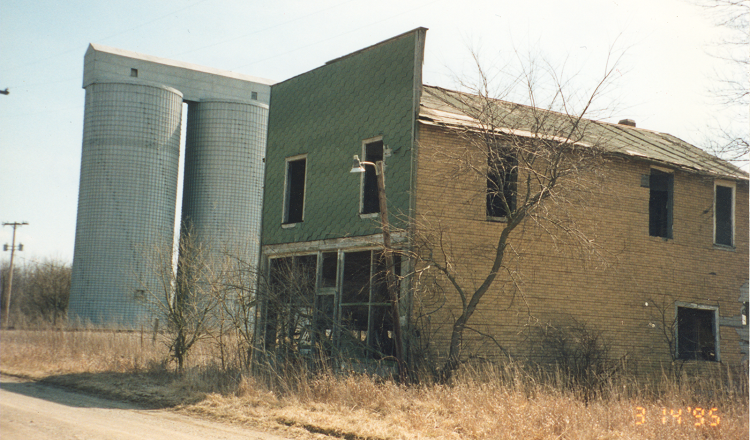 Most of these towns later declined and became ghost towns when there was a decline in the economic activities supporting them. Some of the major ghost towns in Indiana include:

The site for Mollie is located along County Road 400 North in the Blackford County. Oil was discovered around the site of the town in 1876. The development of this Trenton Oil Field let to the creation of an oil boom town known as Mollie.

The town was named after early settlers and by 1890 it was a booming business center with general stores, a post office, a train station, cider mills, banks and other business.

Oil production began to decline in 1900 and this also marked the start of the decline of the town. By 1907 the post office was closed and most of the business and resident moved out of the town. The towns passenger train was discontinued in 1941 this made the remaining people move away from the town.

Today only two homes still stand at the site of this Indiana ghost town, with most of the early structures having been destroyed and part of the town turned into farmland.

This is another great ghost town in Indiana. Beanbloossom is located between Nashville and Morgantown at the junction of SH 45/135.

Placer gold was discovered on the Beanblossom Creek in early 1870s bringing in a lot of prospectors who settled on the site creating a small mining town. Although there was much excitement over this new discovery, the gold was quickly exhausted from the area.

With the diminishing of the mining activities in the 1900s, most of the people moved away living behind structures. Today the town still has a few remnant inhabitants and some of the abandoned building still stands.

The town started in 1816 at the foot of a fall on the White River (on the East Fork of the river) as resting place for the stagecoach route travelers between Vincennes and New Albany. The town expanded rapidly reaching a peak of about 1200 and becoming the first county seat for the Martin County.

At its peak, the town boasted of a whetstone factory, two mills, a post office, hotels, a button factory, homes, river ferries and churches among other structures.

Following severe cholera and yellow fever plague of the 1820s, a number of inhabitants of this town begun to flee the area. This reduced the appeal of the town and the capital of Martin County was moved to Mount Pleasant. The post office was finally closed down in 1830.

Today none of the original structures stands. But in an effort to conserve the history of this great ghost town a pioneer style church was built on the original site of Hindostan. Much of the town site is protected within the Hoosier National Forest.

Tremont is a ghost town that was located at the intersection of the county road 100 east and US Highway 12 in what is now the Indian Dune State Park in Porter County. The town was established in the 1830s as a settlement to rival Chicago which was then a small town.

At its peak, the city had a post office, schools, a sawmill, churches, cooper shop and other businesses. New City West was also an important transport hub with its own underground station. The city began to decline in 1876 when it’s only sawmill was burnt down and most of the residents who depended on the saw mill moved away.

In 1908 when an electric interurban railroad line named Tremont was built on the South Shore near the town, New City West assumed the name, Tremont. By 1929, most of the original structures of the city were already destroyed and new structures were constructed to serves as the recreational city of Tremont.

The city was complexly abandoned in the 1960s when the Indian Dune National Lakeshore was created. Some of the original structures can still be seen on the site.

Sloan is a ghost town in Warren County, Indiana. The town was located near Redwood Creek at the intersection of Country road 825 W with country road 100 S near the border of Steuben Township and Jordan Township.

Sloan was established in 1903 following the construction of the New York Central Railroad through its site. The town was named Sloan after a local family. By 1914 a post office was opened at the site of the town. The town flourished for a few years before it began to decline due to changes in the mode of transport. The post office was closed in 1941 and the railroad was abandoned in the 1990s.

Today only a few abandoned building remain in the town making it just another of the Indiana ghost towns.

Dunn is a ghost town in Benton County, Indiana. The town is located near the border of Hickory Grove Township and Parish Grove Township along County Road 300. Dunn was established in the early 1900s as a railroad town. The town was named after Captain James Dunn.

At its peak, Dunn had a post office, a grain elevator, general stores and a number of other businesses. The town was soon abandoned following a decline in business.

Today visitors to this Indiana ghost town can see the abandoned rail lines and the abandoned grain elevator and a few other structures.

Next: Panning for Gold in Indiana

And: Gold Panning and Prospecting in Ohio