Washington was a hotbed of volcanic activity in the Cascade Mountains not so long ago. While this is an interesting bit of geology for just about anyone, it has particular importance for rockhounds seeking gemstones and fossils. Volcanic activity quite often seeds an amazing amount of material which is good for collecting, cutting, and anything else you might choose to do with your stones.

If you decide to do some rockhounding in Washington

you’re not going to be disappointed. The scope of minerals available is huge, but we’ll help you find out a few destinations to find some of the more popular stones and gems you might be seeking. 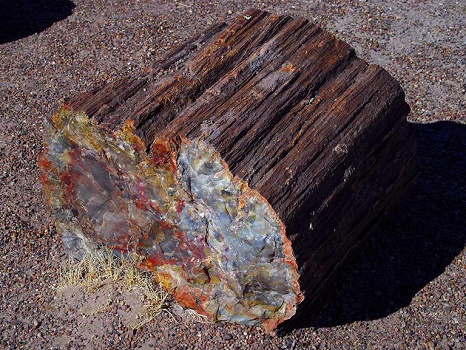 Quality pieces of petrified wood can be found in many places throughout Washington.

Collecting Amethyst and Quartz in Washington

If quartz, and it’s purple variant amethyst, are your thing then you’re in luck.

Snohomish County is a great place to find quartz and the occasional even amethyst crystal. One of the most popular destinations in the area is Cedar Ponds. You’ll be able to find a variety of both types of crystal here, but the clear variation is much more common.

King County is another one of the hotbeds for quartz in Washington. If you take some time to explore around North Bend then you can expect to find quite a bit of quartz in both the clear and smoky varieties. Occasionally, nice chunks of amethyst can be found in this area as well which are real treasures for any Washington rockhound.

The variety is nice, and it’s a good outdoors way to spend an afternoon.

If you’re looking for really high-quality specimens and aren’t scared of a little bit of challenge then you’ll be right at home in Okanogan County. This area features some of the best specimens of the crystals in the state, but it can take some serious work to pull what you want out of the ground.

Agate is also abundant in the state, as you’d expect from pretty much anywhere volcanos can be found. The state is pretty much covered with them, and they’re a common find in creek beds anywhere you may find yourself.

Beaches along the western edge of the state are probably the most common area where they can be found. Two areas of particular interest are Damon Point and the beaches along Olympic Peninsula. Both of these areas feature an impressive amount of amber colored agates which are sure to look great in any collector’s cabinet.

You might also want to look at bars along the Columbia River. Some of the better spots to find the stones can be found near Richland and Pasco. Both of these locations should allow you to fill up a nice bag with some work on your part.

Like most places bearing the gems, however, agates can often turn up in unexpected areas. Keep an eye open even if you’re not on a specific collecting trip and you might be surprised at what you can find.

There are actually very few places in the United States where you can find true jadeite and fortunately for you Washington is one of them.

The gem will be found here in a variety of colors. Nephrite is also a fairly common find if you’re on the lookout for it. Nephrite is an “inferior” form of jade, a softer stone with the same coloration and much of the same characteristics. If you’re a lapidary artist, though, you’ll want to keep looking for true jade since it has a tendency to crumble and craze when placed to the wheel.

A cursory search will show you that there’s a wide variety of places where the stone can be found in the state. Some of the best locations are Whidby Island which is near Oak Harbor, and along the Skagit River.

If you’re looking for stones in Washington, be sure to take a detour to find some jade. The stone is quite rare in the US, and it makes both a valuable material for those who cut stones and a fantastic addition to any collection without the need for polishing.

Petrified wood can be found over most of the state.

There’s really no specific area where you’ll want to look, there’s a lot of it and it can commonly be found in creek beds or anywhere else you might be collecting. Look for the tell-tale shape of the pseudomorphs while you’re on location for other stones and you’re on the right track.

Washington has a history of immense geologic activity, and as you can see that makes for an impressive variety of stones which can be found in the state. It’s worth a trip out there just to rockhound, so give it a shot if you think you’ll be finding yourself in the Pacific Northwest sometime soon.

Next: 6 of the Best Washington Beaches to Hunt for Agates & Sea Glass