There is gold throughout the state of Washington, but most of the large, profitable mines are found in the northeastern part of the state.

There are still some remote locations in Eastern Washington with good opportunities for gold miners.

Let’s look at a few of the historically rich areas to mine for gold. 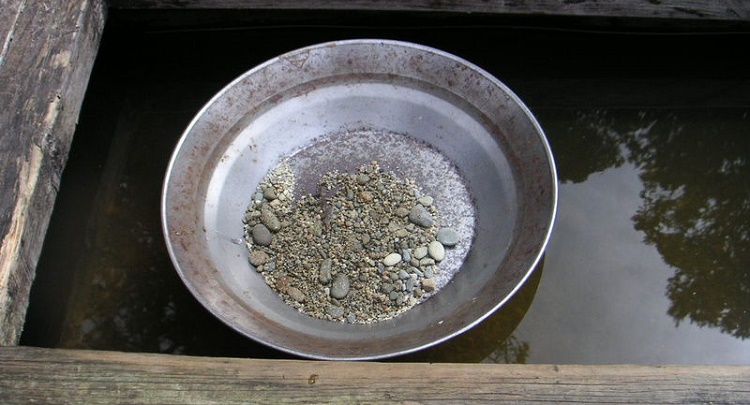 The area around the town of Republic is a very productive gold mining district in Washington. It is located in Ferry County about 30 miles south of the Canadian border. Both lode and placer mining has occurred extensively here.

The Sanpoil River contains gold from its confluence with the Columbia River up to its headwaters, with most of the mining activity in this area occurs around the town of Republic. The waters around Republic are especially rich. Granite Creek and Eureka Creek both contain placer gold, and significant lode mining can be found just northwest of town.

Some of the larger mines in this area include the Knob Hill Mine, Flag Hill Mine, and Mountain Lion Mine, with many unnamed prospects scattered throughout the area. The lode mines of Ferry County are credited for being the main gold producers in the state of Washington during the years when lode mining was highly active around Republic.

A few miles south of Danville, placer gold can be found in Goosmus Creek.

A neat treasure story of a lost “gold ledge” exists in the Danville area, where a prospector in 1912 is said to have found a high-grade ore specimen containing over 50-ounces of gold. The story claims that he did not originally identify the ore as gold, and was unable to find the source again.

The Covada Mining District has significant mining activity in the area just west of the Columbia River on Stranger Creek, Nez Perce Creek, and Stray Dog Canyon. Noteworthy mines in the area include the Longstreet Mine and Silver Leaf Mine near the old Covada town site.

Many small prospects can be found throughout the mountains in this area and placer workings can be found on many of the small tributaries as well as the major drainages in this area. The district is located on the west side of the Columbia River near the town of Daisy.

Finding Places to Mine Gold in Eastern Washington

Eastern Washington still holds a lot of potential for gold prospecting. There is a long history of mining in this part of the state and there are undoubtedly still gold and other precious metals that haven’t been found yet.

Learning about the historic mining areas in Washington is always a great place to start. While there could be gold in places that no one has ever looked before, most successful gold prospectors have more success when they spend time in known gold districts.

The major mines in Eastern Washington were lode mines. The gold is locked up in ore, but you will often find that the creeks and rivers around these mines also have placer gold deposits in the gravel.

You might also be able to use a rock crusher to bust apart rich gold ores for further processing.

Washington has lots of old gold mines. Do your research and you might be able to find a good areas to do some mining that will still result in some good gold.