When it comes to metal detecting Wyoming often gets surprisingly very little attention when compared to its neighbors despite having a rich history and vast mineral deposits. The state is also sparsely populated and thus has not been explored as are many other areas in the region.

Most people think of natural gas and cattle ranching when they think of Wyoming, but that’s not all that the state has to offer, with a long history of metal mining (Gold, silver, and copper) and quite a number of mining boom towns.

This combination of history and mining makes the perfect ingredients for successful metal detecting. 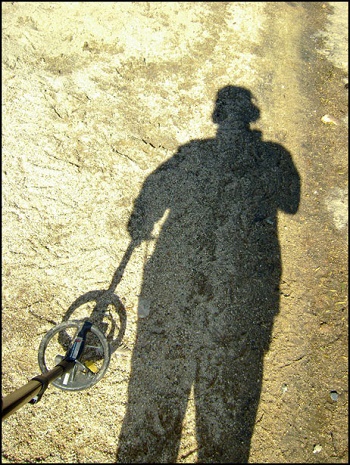 Gold was first discovered in Wyoming in 1842 but the hostile Indians prevented any serious mining efforts until the 1860s when more rich discoveries that attracted more people were made. This marked the beginning of the mining activity in a state that has gone on to produced several important minerals.

Some of the rich mining areas include the Wind River Range which is home to mining districts such as the Oregon Buttes, Twin Creek, and Lewiston districts.

In central Wyoming, there is the Granite Mountain range, the Rattlesnake Hills, the Seminoe and the Tin Cup mining districts.

All these areas have historically produced precious metals and you may be able to use your metal detector to find rich gold ores at abandoned gold mines.

There are plenty of areas to find coins and relics in Wyoming too. If you want to find some of Wyoming’s history then consider doing some metal detecting in these places.

Ghost towns have lots of coins and relics in the ground waiting to be discovered. Ghost towns are also associated with buried treasure as many people in the past used to cache their wealth below their cabins.

Metal detecting in such places presents a perfect opportunity for you to strike something of value. However, it is important to note that some old ghost towns are private properties and you should seek the permission of the owners before metal detecting. Some are now on state parks and will have specific laws or restrictions on metal detecting.

You will need to do your research on local ghost towns

so that you have the right information regard their ownership.

And: South Pass City – A Look into Wyoming’s Past

Rivers, lakes, and reservoirs in Wyoming sometimes have hidden relics that can be discovered. Some reservoirs created in Wyoming has old settlements at their bottom. These places are easy to miss because the water hides evidence of the past.

Metal detecting in such places is likely to yield more value because they are out of reach from most treasure hunters. There are also several stories of buried treasure that was buried along rivers. With flooding, some of the buried treasure may have become exposed that were once buried.

Of course you can also find gold nuggets in many of the rivers and creeks in Wyoming. Search in the areas that gold has been mined in the past.

Wyoming has a number of great city and county parks that you can search for lost coins. Metal detecting in parks is a simple ways to recover valuable old coins, jewelry, and sometimes even important relics. Many of the parks are actually quite old, so its possible to find valuable old coins as well as modern coinage.

Some parks may also have restrictions on digging and even places to metal detect and therefore you should also be aware of this. However, often there are no written laws or rules that restrict metal detecting in parks. Generally, if you respect the park and keep things clean you shouldn’t have any problems with metal detecting.

Wyoming has lots of old railroads that are no longer in use and some old overland travel routes. Most these routes have lots of potential for metal detecting.

For example, most cases of robbery in the past took place along the roads as many people carried valuable with them. Many settlers feared banks during the early days in Wyoming. Robberies were common on trains and stage routes, where the passengers quickly separated from their valuables.

Wyoming has many stories of such robberies where the stolen treasure was then buried somewhere near the railroad or even the stage coach routes. Metal detecting such places can thus put you on the right track to recovering some of the most sought after lost treasure.

Robberies weren’t the only reason that historical items were lost. These old travel routes attracted lots of traffic and thus created a great opportunity for people to lose their valuables such as gold and silver coins, rings, jewelry and other relics. All these lost items were later covered by dust and buried along such routes.

Metal detecting at points along the trails where people might have camped is a good place to start.

Wyoming has lots of tales of lost treasure. Some of them would be worth millions of dollars today!

The key to finding hidden treasure is to have as much information about the treasure as possible. Research widely and when you are almost certain of where to look you start metal detecting the area. Narrowing down the possible location of the treasure is the most important part of the hunt.

Other than the hidden treasure you will be surprised to discover a lot of other relics in the area if you get your locations right. Remember most hidden treasure can be found along old travel routes, in caves, along rivers, and near important settlements.

Some of these places may be on private property or on lands managed by government agencies. It is important you find out the ownership of such properties and seek permission from the owner before metal detecting them.

Next: 8 Ghost Towns in Colorado with Abandoned Gold & SIlver Mines